After a whole lot of buzz, with much anticipation as the nation waited impatiently for the Toyota C-HR, the much awaited SUV is here. Many people see it as a competitor to the Honda HR-V, which has been a runaway success since its launch, carving out a new sub-segment for FWD compact SUV’s while at the same time eating into the market share of compact and medium-sized sedans. The astute pricing of the HR-V, in addition to its spacious build, plus the Honda brand, were all part of the success factor. 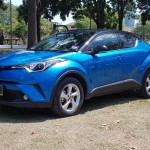 Insofar as the size and drive-train specifications are concerned, the Toyota C-HR is indeed in the same ballpark as the Honda HR-V. The C-HR is powered by a 1.8 litre DOHC engine with Dual VVTi (which means Double Over Head Camshaft and Variable Valve Timing for both inlet and exhaust), developing 140 PS at 6,400 rpm and a maximum torque of 171Nm at 4,000 rpm. In comparison, the Honda HR-V also develops 140PS at 6,500 rpm, and has marginally higher maximum torque of 172 Nm at 4,300 rpm. Short of splitting hairs, I would say the two are the same in terms of power, bearing in mind that when we drive ‘normally’, we are perhaps only calling upon roughly half the total power available, and so the one or two ponies at the top end does not make any difference.

Even the transmission is very similar, both being Constantly Variable Transmissions (CVT), both with seven virtual speeds, and both driving the front wheels of the respective vehicles.

In the price department (we are now looking at post-GST, and before SST), there is approximately a RM20k price difference, based on the current price of RM137+k for the C-HR, versus the RM117+k for the Honda HR-V. The new prices post SST are yet to be announced, but since the Toyota is fully imported (CBU), it will be higher. 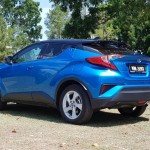 Given the price difference, the Toyota C-HR’s sales numbers, whilst it is enjoying brisk sales numbers, will not be at the same level as the Honda HR-V, but the people at Toyota already knew that when they launched the C-HR, and seem quite happy with the current numbers.

I took the Toyota C-HR from UMW Toyota Motor recently for a road test, and I wanted to see what makes it tick, and here is my report:-

In terms of looks, the Toyota C-HR will appeal to the more ‘flamboyant’ types who want to stand out from the usual crowd – the C-HR designers appear to have chosen form over function, at least in terms of the exterior and silhouette – the overall effect is nothing short of spectacular. Thus, it is my conclusion that one of the purchase reasons for the C-HR would be its looks. Exterior specifications include 17-inch alloy wheels, LED Tail and Stop lamps, puddle lamps on the side mirrors, with auto-fold and turn indicators, and fog lamps at the front and rear. 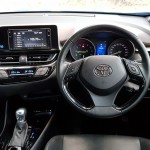 Inside, the C-HR is well appointed, with a combination of leather and plastic trim, and a wrap-around dashboard with piano-black trim that extends down into the centre console, in other words, it has a pleasant interior that looks good. The Optitron instrument panel provides an analogue readout, and also has a 4.2 –inch digital Multi-information Display (MID) for driving information. The steering wheel gets an attractive ‘half-leather’ treatment, and the gear lever shaft also gets a nice and sporty leather boot. An electronic parking brake saves some valuable space. Smart Entry and keyless start are standard. For entertainment, there is a FVD-AUX system with 6 speakers, while Dual Zone automatic Climate Control is standard. One small niggling point is that there is no rear blower for the air-conditioning.

Passenger room is decent, and the interior is comfortable – seats are comfortable and provide good thigh support (a strong point with all Toyota vehicles), and there is even a ‘ta pau’ hook attached to the headrest of the front passenger seat. The driver gets mechanical seat height adjustment in addition to rake and reach. There is ample leg room for both front and rear passengers. 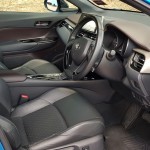 The rear luggage space is reasonable, but appears to be a little smaller than the competition, despite a space saver spare tyre. The explanation for the smaller rear luggage space is that the C-HR has independent rear suspension, which undoubtedly contributes greatly to driving dynamics, but needs more room than the torsion beam arrangement that HR-V has. The C-HR’s rear suspension is actually stiffened with the use of a rear sub-frame – this takes up space under the rear floor, but the additional rigidity coupled with the independent rear pays off when you drive the C-HR. Without a doubt, it corners extremely well, and an added bonus is a quieter interior thanks to the rigidity which reduces the sound transfer from the rear wheels into the cabin. 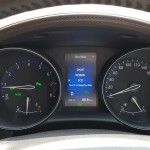 While driving the Toyota C-HR around, some strange thoughts began to flood my mind – it felt somewhat familiar, and it wasn’t long before I realized that the C-HR probably got a whole bunch of bits from the Corolla Altis parts bin. Just look at the drive train – 1.8 litre engine driving the front wheels – through an excellent CVT that felt so familiar – it is the same configuration as the Altis, down to the front and rear sub-frames, four-wheel independent suspension, etc, etc. The C-HR retails at a premium over the  Altis, but this is due to the fact that it is a CBU but it is comforting to know that the mechanicals are similar. There are three driving modes, Eco, Normal, and Sport, easily activated, and each one changes the behavior of the engine and transmission to suit the situation. I found Eco mode was all I actually needed for normal driving – the Normal and Sport Mode provides more excitement if you want to have some spirited driving. The CVT is one of the best in the industry, and I remember I had lots of good things to say about it when it introduced with the Altis some years ago. 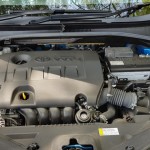 The C-HR gives an excellent account of itself when pushed hard through some winding roads – As mentioned above, the four–wheel independent suspension works very well, and despite the higher ride height when compared to a normal sedan, you don’t feel any lack of confidence when driving it. Anyway, in case you lose it, the C-HR comes with ASEAN NCAP five star rating, seven airbags, Vehicle Stability Control (VSC) and Traction Control system (TCS). In addition, there is a reversing camera, Front and rear parking sensors, Hill Assist Control (HAC), and Auto Brake Hold. On the road, the Blind Spot Monitor (BSM) helps to alert you to other vehicles in your blind spots. The BSM also features Cross Traffic Alert, which tells you if a car is approaching from the sides behind you, a very useful feature when parked in blind spots in car parks. Brakes are ventilated discs at the front and solid discs at the rear, which I like.

We did not finish the entire tank of fuel that was provided with the test car, but the fuel consumption during our test drive session was pretty good. I tracked the fuel consumption on the MID, and got 8.2 and 8.6 kilometres per litre, but that was in city driving.  Depending on individual driving styles, the numbers will vary, and extra-urban consumption would be much better.  As a point in passing, the C-HR is about 100 kg heavier than the Altis.  A plus point is that the engine has good enough power to propel the C-HR around – throttle feel is very light and you get the impression that the engine is working effortlessly – perhaps the reason why I felt so comfortable driving even in Eco mode. 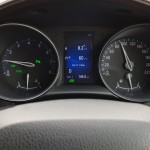 All things said and done, if you are looking at the Toyota C-HR, you are probably looking at the Honda HR-V too. Now the sixty-four dollar question would be, “Which one should I choose?”  In paragraph two above, I have mentioned that insofar as the drive train is concerned, the two are in the same ballpark. In terms of specifications, the two are very similar, with some small differences, but both are just as robust, and both are quite complete. In terms of interior space, the HR-V might have some advantage for the rear stowage area, thanks to its torsion beam design, but the C-HR with its independent rear suspension would handle better at higher speeds.

The final factor would be the price, and this decision will depend on your affordability, your brand preference, and also the looks, depending on whether your head or heart rules.