This weekend (2 – 4 August 2018) is going to be rather exciting for Terengganu folks, because for the first time, a car race is going to take place right in the centre of Kuala Terengganu City, at the Sultan Mizan Zainal Abidin Stadium. The Toyota Gazoo Racing Festival’s first race for the 2018 Vios Challenge will kick off on a street circuit that has been carved out of the car park and road complex around the stadium.

In addition to the Vios Challenge, which is expected to take place over two days, there will be other carnival-type activities organized by UMW Toyota Malaysia, so there is plenty of fun for all members of the family. 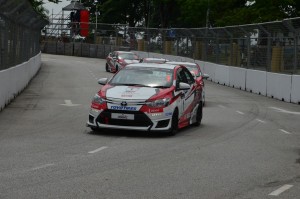 The Vios Challenge will be run over four events, starting with this weekend’s event in Kuala Terengganu, and will see drivers pitting their skills against one another to find a champion for each round. Points are also scored in each round, with the winner scoring the most number of points and lower points for the rest, up to 10th position. These points will go towards the season’s total to find the overall winner at the end of the four-race series.

To make it an even playing field, there are three categories of races – the Promotional Class, the Sporting Class and the Super Sporting Class. The Promotional Class is a category created for celebrities, to add colour to the Toyota Gazoo Racing Festival. Some well-known Malaysian celebrities are expected to be there for this weekend’s races, and they include Wani Hasrita, Janna Nick, Khai Bahar, Nabila Razali, Akim Ahmad, Nabil Ahmad, and Aiman Tino. Also in the group is none other than UMW Toyota Motor’s Deputy Chairman, Akio Takeyama, who is also a racing enthusiast. Last year’s Promotional Class Winner Shawn Lee and runner-up  Shukri Yahya will still be racing in the Vios Challenge, but they are ‘upgraded’ to the Sporting Class.

The Sporting Class is for experienced race drivers who have raced, but have never won a race – this category is keenly contested, and many thrills and spills are expected. Fourteen competitors will be contesting for honours in this first round. The favourites for this category are Brendon Lim, Patrick Tam, Kenneth Koh  and  Wong Chin Eng. Shawn Lee and Shukri Yahya are expected to give them a run for the money. Other drivers in this category include Adzeen Eqwan, Eric Yong, Hayden Haikal, Ken Foo, Lim Sai for, Oscar Kok Tung, Vincent Ng, and Akina Teo, who had a poor season last year, and is looking forward to a podium this time.

The hottest race is always the Super Sporting Class – this race is for experienced racing drivers who have won races before – we will not see Tengku Djan this time around. However, Djan will be contesting in the next few rounds.  Nevertheless, we will still see plenty of action from the likes of Mark Darwin, veteran racer Keifli Othman, and Brendon Paul. This round will see twelve contenders, the others being Boy Wong, Dato Farouk, Eddie Liew,  Ho William, Kenny Lee, Rocky Siow, Ser Meng Hui and Syafiq Ali.  We also have an interesting newcomer to the series, Freddie Ang, 24, who has Formula BMW and go-karting experience. Freddie comes from a family of motorsports enthusiasts, and is the younger brother of Dominic Ang, currently competing in the China GT races.