After six days of intensive training at the Vios Challenge Racing School, a fresh batch of racers, comprising six Malaysian celebrities and two teens, are certified to compete in the second season of the Toyota Vios Challenge. 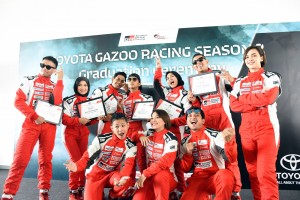 The new celebrity racers who will be racing in the Promotional Class are singers Aiman Tino, Khai Bahar, Nabila Razali, Wany Hasrita, Akim Ahmad and comedian Nabil Ahmad. “While some of us may have had the experience of sharing the stage with one another, it’s going to be an entirely out of water experience to be racing alongside each other,” said Nabil. 26-year-old Wany is also looking forward to her debut as a celebrity racer. “It’s an honour to have been selected by UMW Toyota Motor to become one of four women on the grid and I look forward to the first round,” said Wany.

The celebrities returning for the second season of the Vios Challenge are Shawn Lee, Syukri Yahaya, Diana Danielle and Janna Nick, all of whom also completed a refresher course. 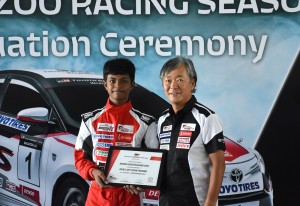 The two teenagers (both 14), and former karting teammates, Mohamed Hayden Mohamad Haikal and Oscar Ng Kok Tung, will be making their saloon car racing debut in the Sporting Class. “When I race, I like to push the limits to do better and better. The Toyota Vios Challenge has provided me with a new set of challenges as it is a different type of racing compared to karting. There’s a lot for me to learn, different techniques, different challenges. I’m thrilled to have been given the chance to race with well-known racers and celebrities. All this really excites me,” said Mohamed Hayden. 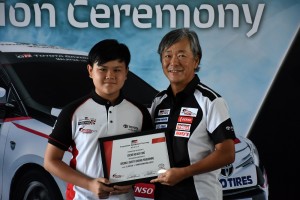 Meanwhile, Oscar will be following in the footsteps of his father, Ng Wai Leong, a former national karter and single-seater race car driver. “The principles of racing remain unchanged, but it’s an entirely new experience piloting a full-sized saloon car with a manual transmission as opposed to driving a kart, and something I’ve got to quickly come to terms in order to be competitive,” he said.

Shawn Lee, who is last season’s Promotional Class champion, and Syukri Yahaya stood out among the celebrity racers last year and have since been upgraded to compete in the Sporting Class this time. For former child actor and beatboxer, Shawn Lee, the experience from competing in the first season of the Toyota Vios Challenge has been both exciting and challenging. “Returning as defending champion, the expectations are certainly higher. Season 1 was an extremely steep learning curve for me, and I am sure for all the other celebrities on the grid as well, but the refresher course has enabled me to enhance my car control, speed and
intuitiveness behind the wheel,” said Lee.

Said Diana Danielle, “Like everything else, practice makes perfect and although I endured a rough start to the season, my performance, confidence and consistency gradually increased. With the four of us (including Shawn, Janna and Syukri) returning for a second season, there’s really no excuse not to gun for a top three finish this time round”. 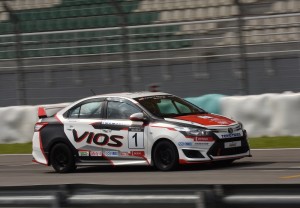 The Vios Challenge Racing School is managed by Wing Hin Motorsports under the supervision of Toyota Racing Development (TRD) Japan. The intensive training included a one-day theory session on the principles of defensive driving, vehicle technology, driving attitude and behaviour, and emergency braking and avoidance techniques.

The drivers subsequently spent another five days on track at the Sepang International Circuit where they were taught the principles of racing, understanding track rules and regulations, how to execute a proper gear change (yes, all the cars are fitted with manual transmission) including the heel and toe technique, racing lines and how to enter and exit corners, as well as the proper technique and threshold of braking.

The racing cars are also prepared under the supervision by Toyota Racing Development (TRD) Japan, with the race run to regulations governed by the Fédération Internationale de l’Automobile (FIA) and the Automobile Association of Malaysia (AAM). The cars are base-model Toyota Vios 1.5 fitted with a full roll cage for safety, and equipped with race-worthy modifications that include aerodynamics, suspension system, exhaust, brakes, clutch, a limited slip differential and tyres.

“The first season of the Toyota Gazoo Racing Festival and the running of the Toyota Vios Challenge have been absolutely phenomenal from both a promotional and commercial perspective,” said UMW Toyota Motor Sdn Bhd President, Ravindran K. 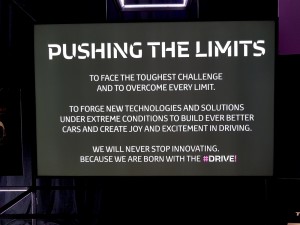 “In line with the company’s tagline All About the Drive, both the festival and the Vios Challenge successfully promoted the merits of the brand and this commercially translated into an increase in sales, particularly for the Vios. It visibly demonstrated the Vios’ competitiveness, reliability, durability, safety and agility, propositions that may have otherwise been taken for granted by consumers in search of a mid-sized entry level or family sedan. Like we say, it’s All About the Drive and in order to truly appreciate what the car is
capable of, you have to first get behind the wheel of a Vios!”

The Vios Challenge will be run on a specially-built street circuit in conjunction with the Toyota Gazoo Racing Festival, which will feature a carnival with activities for all, including stage games, lucky draws, celebrity autograph sessions, as well as a showcase of Toyota vehicles.

The first Toyota Gazoo Racing Festival and Vios Challenge of the new season will be held on 3 & 4 August 2018 at the Sultan Mizan Zainal Abidin Stadium in Kuala Terengganu (from 9 am). It’s free entry for everyone.

“Kuala Terengganu is going to be special as it will not only be the opening race of the season but it will also be the festival’s visit to the East Coast, and we’re looking forward to the warm hospitality and extraordinary spectator support Terengganu is well known for,’ said Ravindran.

From Kuala Terengganu, the Toyota Gazoo Racing Festival will move to the Malaysia Agro Exposition Park Serdang (MAEPS) in Serdang, Selangor on 19 – 21 October 2018; the Batu Kawan Stadium in Penang from 22 – 24 February 2019; and end at the Sepang International Circuit on 12 – 14 April 2019.