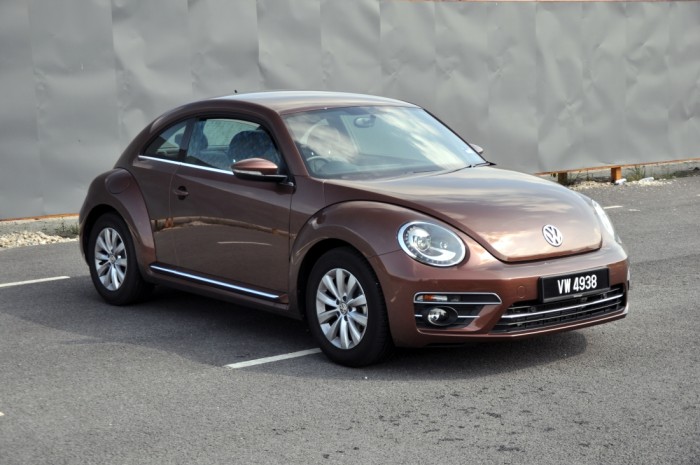 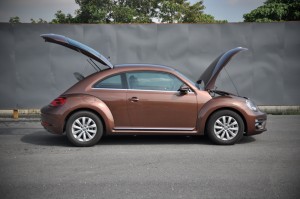 Ferdinand Porsche was given a simple brief – build a simple, durable, affordable car that can ferry a family of five comfortably on the highway. Fast-forward those bits about the KdF Wagen, hippies, and the rest of history, and we end up with one of the most recognised icons of the modern world – der Käfer, or the Beetle.

The new Beetle on review here however, is no longer simple and affordable unless you speak in relative terms. 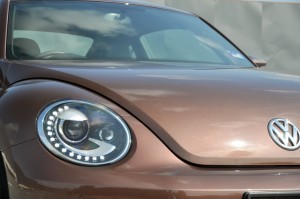 The new Beetle (we will not make any references to the ‘New Beetle’ of the ’90s because some of us refuse to accept its existence) keeps to the recognisable ‘bug’ profile but with updates. This ‘new’ one is already about seven years old and uses the Mk 6 Golf and Jetta platform. But it has been updated with new bumpers. That may not seem like much but bear in mind that the original Beetle remained largely similar throughout its long life.

There are however, modern touches to its exterior, such as bi-Xenon headlights with LED daytime running lights, as well as LED rear lights, to give you some of that 21st century vibe that you may feel you will miss. 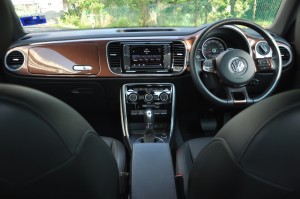 Most of the modernity however, is to be enjoyed inside. Despite Volkswagen attempting to throw in the retro look with the narrow and flat body-coloured dashboard, body coloured trimmings and the skinny steering wheel, it still has to conform to new safety regulations and consumer preferences.

And so we get dual zone Climatronic climate control, ‘Vienna’ leather seats, the 6.5″ touchscreen ‘Composition Media’ system with 8 speakers, MP3 compatibility, iPhone connectivity and SD card reader so you can listen to your Cardi B or Engelbert Humperdinck. 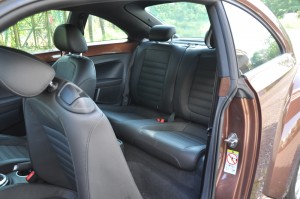 The front leather sports seats come with ‘old school’ manual levers and dials for adjustment but they do feature lumbar support. The rear seats are scalloped to hold you in place and are fairly comfortable. But because of this design, there is no longer proper room for a fifth passenger. On the bright side, ingress and egress for the rear seats are not too problematic thanks to the large door opening and good clearance for heads.

Having said that, three-door cars are popular in some markets and they would have no issue with the Beetle; those who are used to four-doored ones just need to learn. The rest of the interior is pretty much Volkswagen in detail and quality, except for the wide elastic band disguised as the ‘door pocket’. I’m not too sure what that’s about. 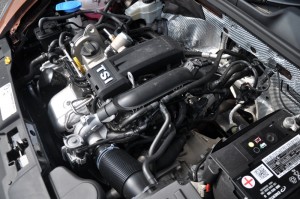 Unlike the rear-mounted, air-cooled engine of the original, this Beetle gets a more conventional front-mounted, liquid-cooled version from the Volkswagen family, which means it’s also turbocharged. The 1.2L TSI engine with 105 PS and 175 Nm is the same as what’s in the Vento Highline, and definitely more powerful than the original one.

Attached to the engine is the 7-speed Direct Shift Gearbox.

I risk cheapening the Beetle by comparing it to the Vento, VW’s entry level sedan, because of the shared drivetrain. That said, the Vento isn’t bad in any way and is a pretty good ride for its price range. The Beetle too can hold its own by virtue of it being built on the previous Golf’s platform. 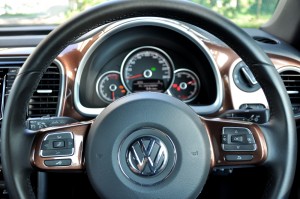 The good amount of torque from the turbocharged engine ensures that you get the Beetle moving at quite a fair pace quite quickly. While driving the Beetle, I can see where people start getting conflicted. This is essentially a very round Golf with the power of a Polo/Vento. It’s not very speedy and it doesn’t ride on the oft-mentioned proverbial rails. If you’re expecting to beat others with this in a drag race or tackle windy mountainous roads, I’d say you’re smoking some very exotic harvest. 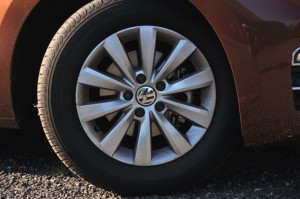 But at the same time, it’s not a train wreck. There is still a good amount of comfort and drivability offered by the Beetle and what the Beetle is good at is its occupation of a spot in the ‘fun car’ segment; that’s ‘fun’ in terms of style more than speed. This is a car that’s suited for a drive around the city or a leisurely cruise along the coastal roads of our beautiful country.

Small family units with young children could probably get by with this, especially if it isn’t the primary vehicle. But for singles looking for a fun, fashionable ride that’s different from the others on the road, the Beetle is one of the very few choices available here (and if not mistaken, the most affordable ‘quirky’ one); unless you feel the need for more doors and boot space. In which case, you shouldn’t be looking for ‘quirky’.

Based on the latest news, this is also the last Beetle so its uniqueness factor could go up.

The Beetle is priced at RM140,193 (on the road without insurance). You get three years of free maintenance and five years manufacturer’s warranty.