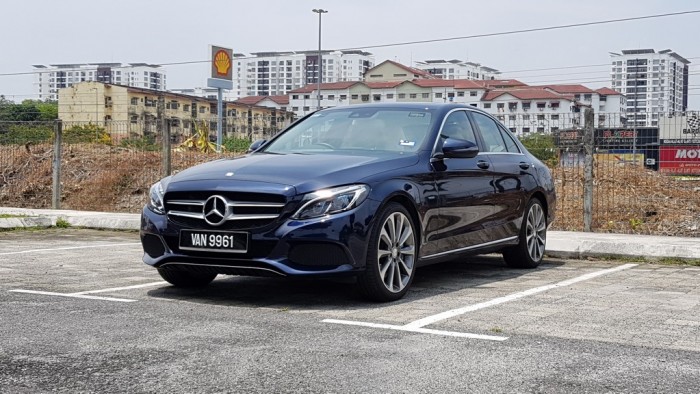 If you are one of the borderline Mercedes-Benz buyers, (as in should I or shouldn’t I), then perhaps it is time to take a look at the Mercedes-Benz C350e – it is probably one of the most  well-packaged cars you can get for your money, and it drives very well, on top of being very frugal on fuel as well. The time to do it is now, seeing as there is a small gap of time between Zero GST and SST in September. That alone is worth close to RM17k, so what are you waiting for? 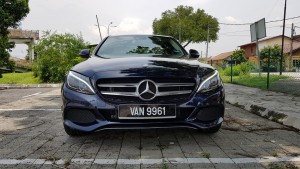 The three-pointed star still garners a high level of respect if you arrive in one, regardless of how old it is, but a new one always gets more. It is a sign that you have arrived, even though sometimes the credit is not yours. The same happened to me when I happened to drop into a little neighbourhood store in my test car, the C350e – the proprietor even helped to carry the merchandise I purchased to the car – maybe he wanted to have a closer look, and maybe it was the brand, but this is not the level of attention I usually get.

The Mercedes-Benz C350e is based on the C Class platform, so externally, it looks very much the same as the ‘normal’ C Class, save for some minor details, but it is a very different kettle of fish. For a start, it is a PHEV, which stands for Plug-in Hybrid Electric Vehicle, or something to that effect. The cars we normally know have an engine as the main power plant; then we know that some have a hybrid system that consists of an engine and an electric motor that helps to boost power, and a system that charges the battery that supplies this motor with power when we brake, or coast. A PHEV is basically a hybrid vehicle, except that the battery in the hybrid system can be plugged into an electric power socket and charged up, allowing the PHEV to travel using this stored electricity as an electric vehicle. Then when this electricity runs low, the engine and hybrid system take over. Further up the line, there are fully electric cars that do not have an engine, but run totally on electric motors powered by batteries which are charged off the power grid. Some electric cars have a small gasoline engine that does not drive the car, but powers an electric generator to charge the batteries – this engine is called a ‘range extender’. So much for education about different powertrains – let us get back to the car.

Personally, I think there is great potential for the Mercedes-Benz C350e – the base power plant is the same 211 horsepower turbo-charged 4 cylinder engine that powers the standard C Class, and some variants of the E, and placed transversely, the same engine is found in some of the A Class hatches. 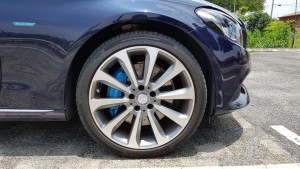 In the case of the C350e, a 7-Speed transmission and an electric motor are connected to the engine via a clutch. Thus the motor and engine are on different sides of the transmission, and drive to the wheels through the transmission can be from the engine, the motor, or both at the same time. The motor also becomes a generator that represents the hybrid part of the drive train, to charge up the storage battery. The battery for the Electric cum Hybrid system is mounted at the rear end of the car (which does reduce the boot space a little), and an ‘intelligent’ system not unlike that of a hybrid system, only more complex, manages it all.

Charging of the system can be done at an EEV charging station (the C350E uses the ‘universal’ charging head that all PHEV’s have agreed to use), and there is an attachment that allows it to be charged from the standard UK type three-pin plug that we use at home. Charging time from low battery to maximum charge takes between 1.75 to 3.5 hours, the home charger taking the longer time. A full charge will give you up to 31 kilometres of fully electric driving, up to 130 km/h. Hypothetically, if you live up to 15 kilometres between home and work, you can get by without using any fuel, but of course, there are other factors, such as your air-conditioner usage, your pedal pressure (demand for power through the accelerator) ambient temperatures, and terrain that will have an effect on the actual range. 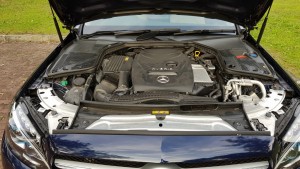 The engine and electric motor give a combined output of 279 horsepower and 600Nm of torque, which means quite a lot of fun when you put pedal to the metal. Despite all this, the C350E is rated according to NEDC, (New European Driving Cycle) at 2.1 litres per 100 kilometres. However, before you start rushing off to book your C350E, here is some sobering information – these are the results based on a set of pre-determined driving conditions, and all the cars are tested in the same way in order to get a set of results based on the same conditions, and real world numbers could be different. The fact that the C350E is so rated already is testament that it does rather well against others, and when I was driving conservatively, especially after charging up the batteries overnight, I managed 5.2 litres per 100 kilometres, which is actually awesome. However, I was too lazy to charge up the battery the next evening, and without the additional range provided by a fully charged battery, instead of which I was relying on the hybrid system charging itself, and also as a result of some heavy driving in the Sport and Sport+ modes, not to mention being stuck in traffic, the consumption went up to as high as 11.1 litres per 100 kilometres, which in still very respectable.  If you diligently charge up your batteries, you will get electric power for up to 31 kilometres each day that you drive, and that would tip the scales quite a bit. 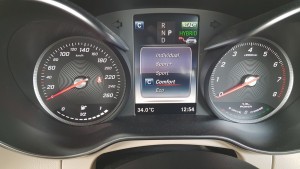 There are five driving modes that the driver can select for the transmission: S+ for Sport Plus gives you maximum boost from the turbocharged engine and motor while the gear change pattern changes to allow you to drag the engine to a higher revolution, the engine is active all the time (as in it does not go into coasting mode and does not turn off when you come to a stop), and suspension damping is stiffened. S for Sport mode gives enhanced boost, but not maximum, active engine and sporty gear changes, and stiffened suspension performance. C for Comfort gives normal boost for turbocharger, and the hybrid system works when on negative throttle and under braking to charge the battery. E for Economy Mode provides boost that is consumption-optimised, and energy recovery is minimized in favour of coasting (the transmission uncouples when on negative throttle to allow ‘free-wheeling’ or ‘coasting. In this mode, all-electric mode and engine shut-off are possible. On top of it all, there is an ‘Individual’ mode wherein the driver can select from various driving parameters to make up his own preferred setting.

ECO Assist activates an additional function, using the radar technology behind the standard proximity warning system in order to do so. If the radar system identifies a slower-moving vehicle ahead, it sends a double impulse through the “haptic accelerator pedal” to signal to the driver to take their foot off the accelerator. The vehicle will then adjust its deceleration automatically, using the electric motor to do so. In this way frequent braking, particularly in stop-and-go traffic, can be avoided.

In addition to selecting a transmission programme, the driver of the C 350 e can also use the operating mode switch to influence the regulation between electric mode and the use of the combustion engine for driving. In the Eco and Comfort transmission modes, the following operating modes are available: 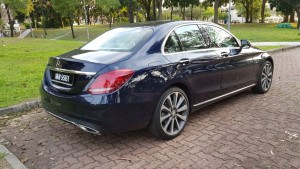 In the suspension department, the new C 350E offers the familiar range of equipment and appointment options that are available for the C-Class and, in addition, includes the enhanced AIRMATIC air suspension as part of its standard specification, along with a further comprehensive range of pre-entry climate control options.

Its electronically regulated continuously variable damper adjustment at both front and rear axle, the air suspension offers outstanding ride comfort with minimal road roar and tyre vibration even when the vehicle is loaded, as well as self-levelling suspension all round.

Pre-Entry Climate Control, a further standard feature, makes it possible to set the desired temperature for the interior of the vehicle before setting off, possible due to the electrically powered compressor.

The C 350 e is fitted with LED Intelligent Light system with Adaptive Highbeam Assist, which makes driving with permanent high-beam possible by masking detected road users in the cone of light for the first time. As a result, the best possible headlamp range is always available to the driver. The function is active from a speed of 30 km/h on roads with no road lighting. 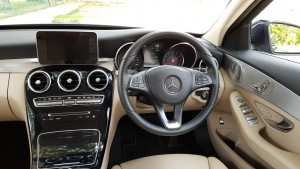 The C 350 e offers the same extensive range of safety and assistance systems as all other C-Class models. Two of the systems fitted as standard are ATTENTION ASSIST, which can warn of inattentiveness and fatigue, and COLLISION PREVENTION ASSIST PLUS, which protects against collision at speeds of over 7 km/h and, if the danger remains and the driver fails to react, can also undertake autonomous braking at speeds of up to 200 km/h and by so doing reduce the severity of an accident involving a slower-moving vehicle.

I drove the C350E over a period of three days, and my driving stints included a fast trip down to Port Dickson and back, using a mixture of the Sepang – Lukut twisties and the North South Expressway and the PD-Seremban Highway.

Due to the additional components such as the hybrid system also the air suspension, the weight of the C350E (as published on an overseas website, is listed as 3,924 lbs, or 1,783 kg. A normal C200 tips the scales at around 1,450 kg, so the C350E is a good 333 kg heavier, but despite the additional weight, the car handles itself quite well, and the additional torque from the combination of engine and electric motor more than made up for the weight increase. As a result, I really couldn’t feel that the car was heavier, and neither did I feel that the handling was compromised in any way. The air suspension probably helped in the handling too, and the ride is really comfortable; should you desire more action, switching to either of the sport modes will stiffen everything up.

The internal fittings are beyond reproach, and the electric sunroof is an added bonus. In an overall sense, I would say that this is indeed a great car for the driver – the availability of all-electric drive, the plug-n hybrid system, the intelligent driving modes and suspension modes, all tote up to make this a car of great value. The current retail of the C350e is approximately RM281k, for Pen. Malaysia.