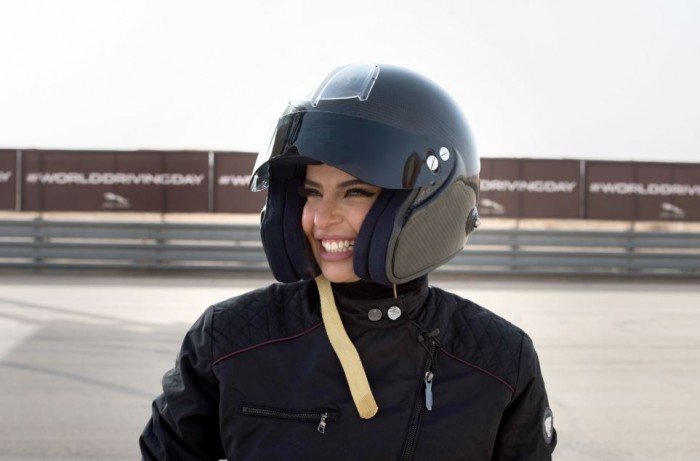 It may not be such a big story for us to see a female behind the wheel of a car, or to see a female racing driver, but such a sight was officially non-existent in Saudi Arabia, until the decades-old ban on female drivers was lifted yesterday (24 June 2018).

Jaguar Land Rover, has called this date “World Driving Day”, a day when finally, the whole world can enjoy the thrill of being behind the wheel of a car. And to celebrate World Driving Day, Aseel Al Hamad, the first female board member of the Saudi Arabian Motor Federation and racing driver, drove a lap of honour in a Jaguar F-TYPE. Aseel who is also the Saudi Arabian representative at Women in Motorsport Commission for Fédération Internationale de l’Automobile (FIA), has driven all over the world (including a 2012 F1 car) but never driven on a track in her home country.

“Having loved cars since I was a child, today is highly emotional for me. This is the best driving moment of my life. What better way to kick off World Driving Day than a lap of honour in my home country in a Jaguar F-TYPE – the ultimate car to roar around the track. I hope people around the world will share in our joy today by sharing their most memorable driving story using #worlddrivingday,” said Aseel.

By creating World Driving Day, Jaguar urges people to remember this historic day and what it means to women, to Saudi Arabia and to world progress in general. As part of its ongoing work with over 40 Universities and Academic institutions globally on future mobility solutions, the company will also be partnering with University in Saudi Arabia to join this global network. The partnership, to be announced later this year, will be a unique exchange to tap into the brightest young minds in Saudi Arabia to shape the company’s future innovations as it moves to ACES (an Autonomous, Connected, Electrified and Shared future).

On World Driving Day Jaguar invites people to share a memory of their best driving moment (image or anecdote) using the #worlddrivingday tag.

“It’s easy to forget and take for granted the enjoyment of driving and just what a privilege it is to get behind the wheel of a car. World Driving Day is a commitment from Jaguar to celebrate this key moment annually for both men and women. This year, we’re really excited to collaborate with the brilliant students from Saudi Arabia to shape the future of mobility for people around the world,” said Jaguar Land Rover spokesperson and Customer Experience Director, Fiona Pargeter.