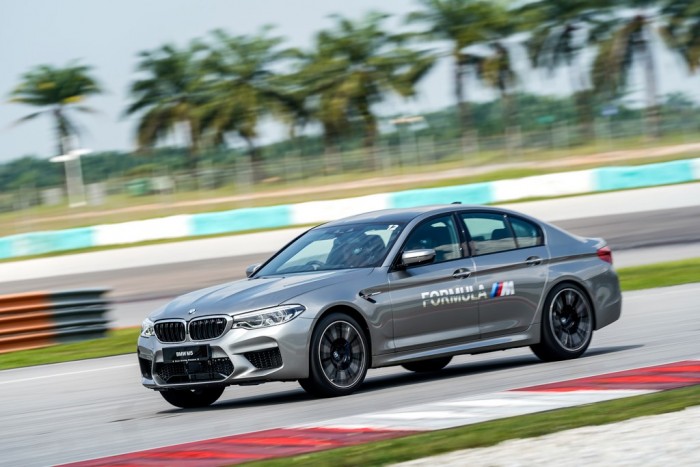 Sepang, 18 May 2018 – in these auspicious times, the letter M has become somewhat of a catchword in Malaysia, but what we are talking about here is the M which is the most powerful letter in the world – the M that denotes the top-of-the heap, most powerful M range in the BMW line-up, and today we talk about the launch of the M5 in Malaysia.

The first time I drove the M5 was two model launches ago, in 2005, in a faraway country. BMW hired an airport runway that was a little over 3,000 metres long, and we used the Launch control to accelerate from Zero to 300 km/h. It was an awesome feeling to get that kick-in-the-pants feeling as the M5 changed gears, with a little bit of trepidation even, because it felt like the rear axle was about to give way. That was with 500 horsepower and 520 Nm of torque. Today we are looking at 600 horses, and 750 Nm of torque available in the 2018 BMW M5, and in a lighter body too. 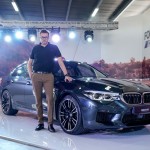 Mr. Harald Hoelzl, Managing Director and CEO of BMW Group Malaysia said, “The fascination for BMW M has lived for more than forty years; its legacy carried on and renewed by people who express their passion for motorsports through the driving experience of these exceptional vehicles, and this is evident in the BMW M5 – which has long made history as a powerful premium business sedan. The BMW M5 still dominates the segment it competes in and is a statement of supreme engineering skill and innovative driving intelligence.”

Hoelzl added that the New BMW M5 already has several accolades to its name, most notable is ‘World Performance Car 2018’ at the 2018 New York International Motor Show, making the win the seventh time BMW has received a World Car Award from the ‘World Car of the Year’ organisation.

“This new luxurious performance sedan has also set not one, but two Guinness World Records for the longest drift and the longest twin-vehicle drift. BMW instructor Johan Schwartz completed a sustained drift of 374.2 kilometres on a skid pad, setting a new world record for the longest drift in eight hours. Schwartz then collaborated with BMW Performance Centre Chief Driving Instructor Matt Mullins to perform a twin vehicle drift over a distance of 79.3 kilometres in one hour.” said Hoelzl. 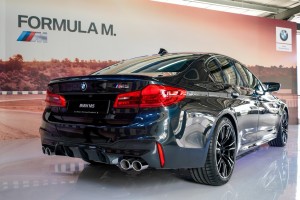 For the first time, the New BMW M5 features the M xDrive, which is an all-wheel drive system – This makes perfect sense if you know that the M5 is probably the most powerful sedan in the world, with all of 600 horsepower under the hood and 75oNm of torque – without AWD, we are likely to see many drivers taking unscheduled off-road excursions  to explore the flora and fauna. This system has various modes that are customisable according to the driver’s needs.

The various M xDrive modes (4WD, 4WD Sport, 2WD) take the driving dynamics of the New BMW M5 to a whole new level. There is even a 2WD mode that switches the car to rear-wheel drive for the ultimate driving experience.

In its design, the newly developed front bumper trim has larger air intakes to keep the cooling systems and brakes sufficiently supplied with cooling air, especially when put to the test on the race track.

The front bonnet is made of aluminium to save weight, while the roof is made from extremely lightweight, high-strength carbon fibre-reinforced plastic (CFRP). The rear diffuser has also been redesigned. Together with the side skirts, the M rear apron and M rear spoiler do their bit in giving the New BMW M5 its powerful sporting appearance, and the exterior mirrors have a dynamic, M specific design. The hexagonal central air intake in the front end not only separates itself sculpturally from the side air intakes, as it also incorporates the oil cooler, further reinforcing the form following function concept.

The 4.4-litre, high revving V8 engine with BMW M TwinPower Turbo delivers an exceptional output of 600 hp at 5,600 – 6,700 rpm, while the peak torque of 750 Nm is available in full from just 1,800 rpm through to 5,600 rpm. In comparison to the outgoing model, maximum torque has been increased by 70Nm. The engine characteristics can be changed with the push of a button from the default Efficient setting to either Sport or Sport Plus.

The New BMW M5 sprints from 0 to 100 km/h in just 3.4 seconds. Engine improvements to the V8 include newly developed turbochargers and a higher maximum injection pressure of 350 bar, which allow for shorter injection times and improved atomisation of fuel.

Further reliability and durability improvements were made to the lubrication and cooling systems, including an oil pan with a small front sump and an oil cooler. The oil supply system uses a fully variable, map-controlled pump and has provisions for track outings, with the necessary baffles for high levels of longitudinal and lateral acceleration.

The newly developed M xDrive all-wheel-drive system is able to transmit more of the engine power to the road; this is achieved by bringing the front wheels into play when the rear wheels are unable to transmit any more power to the road and additional traction is required. This allows the massive power and torque to be tamed, and makes the driving of the car a lot easier, even for beginners.

Drivers on the more ambitious spectrum can configure the M xDrive at any time to suit their needs. The driver can choose from five different configurations based on combinations of the Dynamic Stability Control (DSC) modes (DSC on, MDM, DSC off) and M xDrive modes (4WD, 4WD Sport, 2WD). 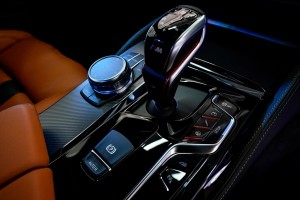 In the basic setting with DSC and 4WD activated, the system permits a certain amount of slip at the rear wheels when accelerating out of corners, giving the New BMW M5 its sporting agility. In the M Dynamic mode (MDM, 4WD Sport), M xDrive allows easily controlled drifts. The three M xDrive modes with DSC switched off were conceived to satiate the appetites of keen drivers primarily for use on the track. Drivers can choose from three configurations including pure rear-wheel drive (2WD). This mode gives drivers the freedom to pick their own drift angle and offers connoisseurs driving dynamics in their purest form.

Power is transmitted through the new eight-speed M Steptronic transmission with Drivelogic, which is operated sequentially via the new, short gear selector in S mode, or manually via paddles on the steering wheel. The D button allows the driver to choose between three Drivelogic modes; Mode 1 for efficient and comfortable driving, Mode 2 for shorter shift times, and Mode 3 for extremely short shift times in a racing set-up. The short shift times and optimal ratio spacing will keep even the most demanding driver happy. The wide ratio spread of the eight-speed M Steptronic unit helps to optimise fuel efficiency as well.

A new dimension in driving dynamics.

The team tuning the New BMW M5 chassis only had one goal in mind – unbeatable driving dynamics with maximum directional stability. This took place in part on the company’s own race circuit in Miramas in the south of France, and the world’s toughest test track, the NϋrburgringNordschleife.

Sophisticated stiffening elements in the front and rear structures have been put into place to ensure body rigidity. The driver can also choose from Comfort, Sport and Sport Plus modes for the Variable Damper Control (VDC) system, which has M-specific tuning and M Servotronic steering. The two M1 and M2 buttons on the M leather steering wheel can be used to store two set-ups combining the driver’s preference of engine, transmission, suspension and M xDrive modes, the DSC mode and Head-Up-Display settings. The preferred set up can then be activated with just a press of the respective buttons. 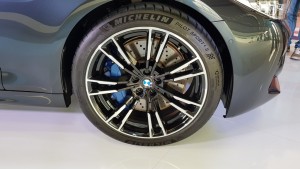 The Driver at the core.

The New BMW M5 sets the benchmark for interiors in the executive sedan segment. This includes innovative infotainment concept as well as outstanding functionality with features such as BMW Navigation Professional 10.25” with Touch Display capability, BMW Head-Up Display with M-Specific Content as well as the full suite of BMW Driver Assistance systems as part of the BMW ConnectedDrive features. 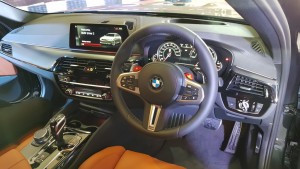 All switches and buttons can be operated with optimal ergonomic convenience, and all of the New BMW M5’s functions are sited directly in the driver’s line of sight. The large digital instrument cluster has an M-specific design and keeps the driver informed on the driving dynamic mode, M xDrive all-wheel-drive system’s setting and Drivelogic option currently engaged.

For sporty drivers, the variable rpm pre-warning field and shift lights that show the best time to change gears when in manual shift mode can also be reflected on the M-specific Head-Up Display. Virtually all the driving dynamic systems can be configured using the central touch display, buttons on the centre console or M sports steering wheel, and the central information display offers Gesture Control. The red starter button stirs the New BMW M5’s engine to life.

The New BMW M5 comes standard with the new M multifunction bucket seats trimmed with Merino leather, which further emphasises the car’s luxurious sporting appeal. The driver and front passenger seats are also fitted with multifunction adjustments, but the most prominent are the visually integrated and illuminated M designations embossed on the headrests to denote the speciality of the premium sedan from BMW M. Seat and upholstery choices include a two-tone combination of Aragon / Black and complete Black matched with interior trim finishers in Aluminium Carbon structure with Dark Chrome highlight.

BMW Group Malaysia also offers step-up options to the standard offerings on the New BMW M5 in the form of the Performance Pack, Advanced Safety Pack and Entertainment Pack.

Additional options are as follows:

Editor’s Note: A car like the BMW M should be enjoyed on the track and our friends at iGarage.my were kind enough to share some footage as well as a brief interview with YS Khong on his impression of the M5. To watch just the driving footage, you can skip the video to 8:55.