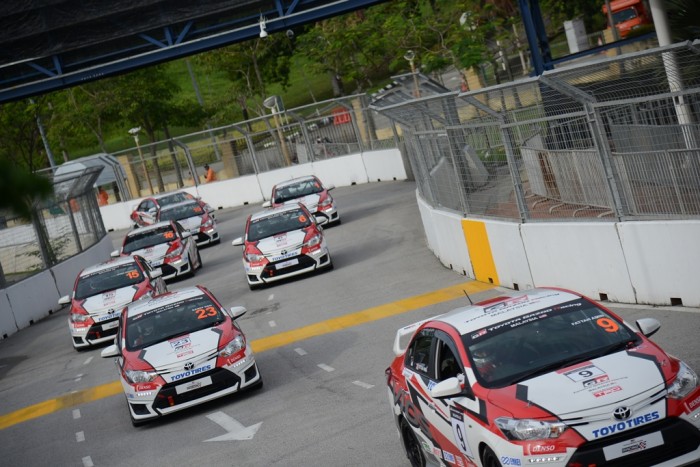 During official practices, Turn 1 was the scene of many skirmishes with the racing Vios’, with the concrete barrier coming out tops every time. The parts department of UMW Toyota must have experienced a large anomaly in the demand for fenders, lower arms, rims and other body parts. Turn 1 is the first right hander turn after the start straight, and in addition to being a sharp bend, is also slightly off-camber. During the races itself, pieces of bodywork, especially the bumpers are the common victims of brushes between cars and the concrete safety barriers.

In the prestigious Super Sporting Category, championship leader and Prince of Drift Tengku Djan was expected to have an easy weekend as he had topped the time sheets in all early practice sessions but when it mattered during qualifying, he clipped the inside of Turn 1 in his pursuit of the younger Mark Darwin, destroying the front wheel and putting him out of the rest of the qualifying session.

He however managed a front-row start for the race on Sunday as he had done enough to outgun William Ho to secure his place beside Darwin who comfortably earned pole position on his third lap. “I was quite comfortable. In fact, I think I was too comfortable and tried to just stay calm and keep away from the walls. The team did a great job to give me a car that gave me a lot of confidence straight off so a big thanks to them,” said Mark Darwin who will be representing Malaysia in the up-coming Thailand Super Endurance 600 Minute race in a Toyota Altis.

In the Sporting Category, surprises continued as the Dream Chaser Team celebrated its second pole position with new-comer Brendan Paul Anthony putting his car in pole ahead of Brendon Lim of Tedco Racing in the qualifying session. Replacement driver and Editor of Zerotohundred.com, Tom Goh, was brought in to replace Kenny Lee whose license was recently upgraded, preventing him from participating in the Vios Challenge. Tom rewarded the team with a brilliant third place on the grid but an unfortunate impact during a jump punctured his sump and he was unable to replace it in time for the first race later in the day. Having no placing, Tom Goh has to start at the back of the grid for the next day’s race.

The Sporting Category race saw Dreamchaser’s Brendan Paul Anthony open a gap to his chasers namely Brendon Lim while the rest of the drivers fought for the final podium position. The pack included Patrick Tam, Ken Foo, Kenneth Koh, Frederick Soo and Jackson Tan who battled furiously throughout the most part of the race. Ken made a great run out of the slow Turn 16 to pass Koh but the pair touched into Turn 1, putting Foo into a half spin. The resulting melee allowed Patrick to recover and take the final spot on the podium.

In the Promotional Class, beatboxer Shawn Lee who had taken charge in qualifying led the pack away on a damp circuit thanks to his quickest qualifying time despite carrying a 40kg ballast for winning in BatuKawan. Shukri Yahaya was breathing down Shawn’s neck from his second position for the first half of the race, but Shawn managed to widen the gap between him and Shukri to seal his third successive win.

The battles were further down the field where Fattah Amin and Danny Koo had their battle for third position while Geraldine Gan had her mirrors full of Venice Min’s No. 16 car. Diana Danielle enjoyed her battle with UMW Toyota Motor’s Deputy Chairman Akio Takeyama for 5th position but she managed to make a bold move in the back section of the circuit to claim that spot.

“It was a very exciting race and I am impressed with the level of competitiveness of all the drivers today. I am looking forward to more racing action tomorrow,” said Takeyama.