Barcelona/Ingolstadt, July 11, 2017 – The all-new Audi A8 that made its world debut last week is of course the flagship model for Audi, but it is also the “spokescar” of autonomous driving – the A8 is perhaps the first production car that will feature ‘autonomous driving’ under limited conditions. (According to Wikipedia: “An autonomous car (also known as a driverless car, auto, self-driving car, robotic car) is a vehicle that is capable of sensing its environment and navigating without human input. Many such vehicles are being developed, but as of May 2017 automated cars permitted on public roads are not yet fully autonomous. They all require a human driver at the wheel who is ready at a moment’s notice to take control of the vehicle.“) 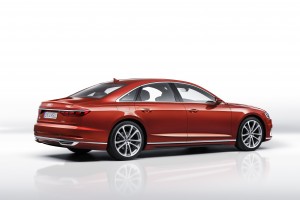 The new Audi A8 is the first production automobile to have been developed specially for highly automated driving. As at the current moment a system called the ‘Audi AI traffic jam pilot’ takes charge of driving in slow-moving traffic at up to 60 km/h (37.3 mph) on freeways and highways where a physical barrier separates the two carriageways. The system is activated using the AI button on the centre console.

The traffic jam pilot manages starting, accelerating, steering and braking. The driver no longer needs to monitor the car permanently. They can take their hands off the steering wheel permanently and, depending on the national laws, focus on a different activity that is supported by the car, such as watching the on-board TV. As soon as the system reaches its limits, it calls on the driver to take back control of the task of driving.

From a technical perspective the traffic jam pilot is revolutionary. During piloted driving, a central driver assistance controller (zFAS) now permanently computes an image of the surroundings by merging the sensor data. As well as the radar sensors, a front camera and the ultrasonic sensors, Audi is the first car manufacturer also to use a laser scanner. The introduction of the Audi AI traffic jam pilot means the statutory framework will need to be clarified in each individual market, along with the country-specific definition of the application and testing of the system. The brand’s high quality standards are equally applicable in the realm of highly automated driving. In addition, a range of approval procedures and their corresponding timescales will need to be observed worldwide. Audi will therefore be adopting a step-by-step approach to the introduction of the traffic jam pilot in production models. 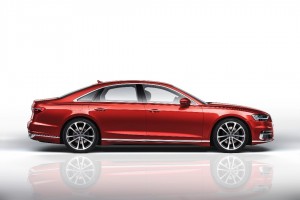 From 2018, Audi will gradually be taking piloted driving functions such as parking pilot, garage pilot and traffic jam pilot into production. The Audi AI remote parking pilot and the Audi AI remote garage pilot autonomously steer the A8 into and out of a parking space or a garage, while the manoeuvre is monitored by the driver. The driver need not be sitting in the car. They start the appropriate system from their smartphone using the new myAudi app. To monitor the parking manoeuvre, they hold the Audi AI button pressed to watch a live display from the car’s 360 degree cameras on their device.

Compared to the predecessor model, the Audi A8 has grown substantially in length, and there are two body lengths available. The range of equipment and materials is extensive, with every detail radiating superlative bespoke quality – from the perforation in the seat upholstery to the electrically opened and closed shutters on the air vents.

For left hand drive countries, there is an optional relaxation seat for the rear right passenger – it comes with four different adjustment options and a footrest. In this seat, the passenger can warm and massage the soles of their feet on a unit with multiple settings incorporated into the back of the front-passenger seat. The new comfort head restraints complete the experience. The rear passengers can also control an array of functions such as ambient lighting, the new HD Matrix reading lights and seat massage, plus make private phone calls, via a separate operating unit. The rear seat remote, with its OLED display as large as a smartphone, is a removable unit housed in the centre armrest.

The luxury sedan’s interior deliberately adopts a reductive design; the interior architecture is clear and with a strictly horizontal orientation. The familiar rotary pushbutton and touchpad of the predecessor model is replaced by a 10.1-inch touchscreen display which, when off, blends almost invisibly into the high-gloss black surround thanks to its black-panel look.

The user interface appears as soon as the car is opened. The driver controls the Infotainment system with fingertip control on the large display. They can use a second touchscreen display on the centre tunnel console to access the air conditioning and comfort functions as well as make text inputs.

The new Audi A8 can also engage in intelligent conversation. The driver can activate an array of functions in the automobile using a new, natural form of voice control. Information on destinations and media is either available on board or is delivered from the cloud at LTE speed. The extensive Audi connect range also includes traffic sign recognition and hazard information – innovative car-to-X services that draw on the swarm intelligence of the Audi fleet.

The extensively optimized navigation is another new feature: It is self-learning, based on the route just driven. This provides the driver with intelligent search suggestions. The map also incorporates highly detailed 3D models of major European cities.

The A8 is also available with Audi AI active suspension- depending on the driver’s wishes and the driving situation, it is capable of raising or lowering each wheel separately with electric actuators. This flexibility imparts the driving characteristic with huge latitude – ranging from the smooth ride comfort of a classic luxury sedan to the dynamism of a sports car. In combination with pre sense 360°, the car is raised with lighting speed if there is an impending lateral collision, reducing the potential consequences of the accident for all occupants.

The all-new A8 will go into production in the last quarter of 2017 – we would expect it to get here not too long after.