Boustead Petroleum Marketing Sdn Bhd, the distributor and marketer of BHPetrol fuels in Malaysia, has launched its Infiniti Diesel improved with a new generation of additives. Infiniti Diesel will be available in Euro 2M and Euro 5 standards; the Euro 2M diesel can be found at all BHPetrol stations (currently numbering more than 320 nationwide) while the Euro 5 variant is available at 105 stations. That means stations carrying the Euro 5 Infiniti diesel still offers the Euro 2M fuel.

“Yes, this means we spend more on additives for our new fuel but we believe in giving our customers the highest quality of fuel in Malaysia and this means providing diesel that has the most effective ‘Clean Up’ performance,” said Mr James Khoo, Retail Director of BHPetrol, a sentiment also shared by Mr Tan Kim Thiam, Managing Director of BHPetrol.

The effectiveness of the new additives compared to the older additives were independently tested according to the Coordinating European Council (CEC) standards, on both older engines and newer direct injection engines; the test engines were the PSA Group’s XUD 9 (old) and DW 10 (new). The tests compared the new additives’ ability in the ‘Clean Up’ and ‘Keep Clean’ performance. ‘Clean Up’ refers to the ability to remove existing/old deposits while ‘Keep Clean’ refers to the ability to prevent new deposits from forming.

So why are these 2 attributes important? In modern commonrail direct injection engines, the piezo fuel injectors which ‘shoot’ the fuel into the combustion chamber have very small holes (measured in microns i.e. millionth of a meter) and very specific fuel spray pattern to ensure a more efficient burn for reduced fuel consumption and emissions. When these microscopic holes (with diameter the size of human hair) are blocked by deposits, the diesel engine will not perform at its optimum. This will compromise power delivery and fuel economy as well as cause other problems such as starting difficulties, poor idling, excessive smoke and even engine damage.

For modern diesel engines, OEM specifications state that the power loss in these engines must be less than 2%, which can be achieved with the minimum additive treat rate. But as BHPetrol uses the maximum treat rate, it claims that tests reveal that this effectively restores any power lost and thus exceeds the OEM specification. 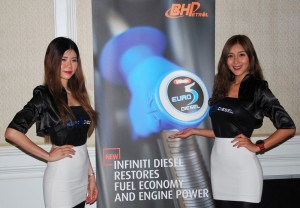 “Once again, BHPetrol is at the forefront of bringing high quality fuels to Malaysian motorists. With this new generation of additives in BHPetrol Infiniti Diesel Euro 2M and Euro 5, owners of diesel vehicles – especially those with the latest engines – will enjoy all the performance that the engines have been designed to provide because the engines will be cleaner. If an engine has been running on fuel with older additives, then switching to new BHPetrol Diesel will see it running better within a short time as the new additives we now put into our fuel also have the best ‘Clean Up’ performance,” added Mr Khoo.

On the government’s proposed use of B10 biodiesel, BHPetrol commented that very likely Euro 5 diesel will continue using the B7 blend (7% palm oil) while the Euro 2M will use B10, if this proposal becomes reality.