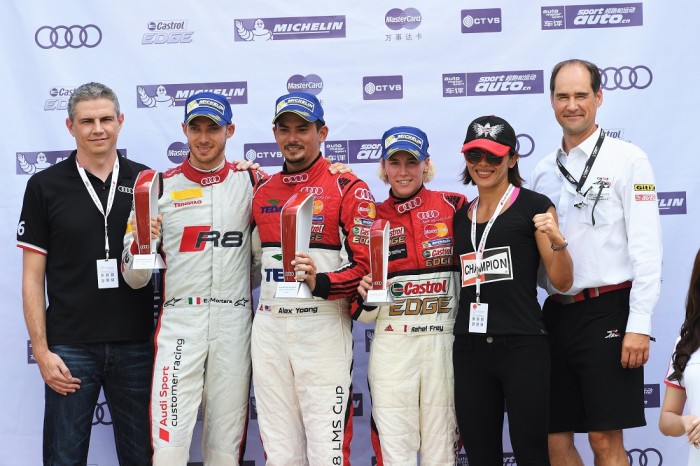 Sepang, August 14, 2016 – Local hero Alex Yoong briefly took the lead in the Audi R8 LMS Cup championship at the Sepang International Circuit (SIC) over the weekend when he won Round 5 in the morning, but running with a 50 kg ballast (additional weights added onto the car) as a result of his win, managed a poor 6 th position in Round 6 held later in the afternoon.

However, as a result of the championship points scored in these two races, Yoong of Audi TEDA Racing Team now shares the lead with Alessio Picariello of MGT Team, both on 95 championship points. Technically, Yoong is in the overall lead because he has two outright victories. 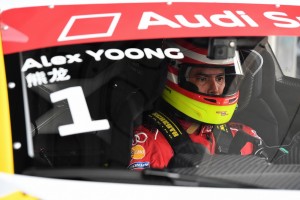 Yoong pulled off a stunning start from 4 th position on the starting grid, drawing parallel with the leaders within 300 metres after the start line on a rolling start and was first into Turn One. He pulled away to approximately a one-second lead and thereafter paced the rest, leading all the way to the end.

After the race, a jubilant Yoong said, “It’s a real relief. Discussing with my engineers to use new tyres for race one was risky but we had to make use of it. We chose a very aggressive setup. After a great start I had a perfect four laps and was able to settle into the lead. It’s been great winning on my home turf in front of my family, friends and supporters.”

The Audi R8 LMS Cup cars are basically GT3 specification cars bought off the shelf – technically they are identical, so it is very much like a ‘Series Production’ type of race. This means that every car has the same horsepower and share the same transmission and suspension. Teams can set up their own suspension settings, and have to run on a fixed number of tyres, so basically it is a test of driving skills to determine the winner. To make it fairer to all, the top three winners of each race are required to carry additional weights of 50kg, 35 kg, and 20 kg respectively. The additional weights affect overall acceleration, lengthen braking distances, and overall handling – lap times, depending on circuits, may vary up to 2.0 seconds.

In the afternoon Round 6 race, the battle between Mortara and Picariello was the highlight of the day. It was close racing, bumper to tail lights most of the time as Picariello now free of the 35 kilograms of ballast that weighed him down in the morning’s race repeatedly knocked at the door of Mortara, who was now the one to carry 35 extra kilograms for his P2 finish in Round 5. Frey was always in close pursuit, waiting to capitalise on any mistakes from the front two.

Credit must be given to Mortara, as he cleverly defended his lead from pole position as a result of garnering the fastest lap in the morning race, to win Round 6, just half a second ahead of Picariello. Crossing the line just behind them both was Frey, whose double-podium over the weekend was enough to bounce her above Martin Rump of Champion Racing Team into third in the overall championship. Rump scored the fastest lap time in Round 6, but was not able to capitalize on his pace after an early contact with another car set him back.

In the Amateur Cup, Jeffrey Lee of Team Audi Volkswagen Taiwan showed his dominance yet again scoring two wins. Vincent Floirendo of EN Sport by Absolute came second ahead of Johnson Huang of Absolute Racing in Round 5, with their roles reversed in Round 6.

“The weekend was another enthralling one for the Audi R8 LMS Cup at Sepang with everyone entertained by the edge-of- the-seat battles,” said Bernd Goeres, Director of Audi Sport customer racing Asia. “The race for the championship is wide open moving into the second-half of the season.”

Rounds 7 and 8 of the Audi R8 LMS Cup will take place on September 24 and 25 at the Korea International Circuit in Yeongam, Korea.

The Audi R8 LMS Cup is operated by Audi China and is part of the Audi Sport customer racing Asia programme. The championship is run in cooperation with FAW-Volkswagen Audi, Audi Hong Kong, Audi Korea, Audi Taiwan and Audi Malaysia.

The series is supported by Castrol Edge, Michelin, MasterCard, CTVS and auto motor und sport. You can watch all the races live at: www.audir8lmscup.com or www.audi-motorsport.com.