Many innovations today owe their existence to incidental discoveries – The reusable glue on 3M Post-It notes was developed during research into super-strong adhesives; Super Glue was born from an attempt to make clear plastic gun sights during World War 2. Toyota Research Institute of North America (TRINA), in its research into hydrogen storage for its fuel cell vehicle may have discovered a breakthrough in battery technology instead.

In its statement, Toyota stated that when working with materials designed for hydrogen fuel cells, its researchers discovered a new electrolyte that works with magnesium anodes.  “We were able to take a material that was only used in hydrogen storage and we made it practical and very competitive for magnesium battery chemistry,” said Rana Mohtadi, Toyota principal scientist and chemical engineer. “It was exciting.” 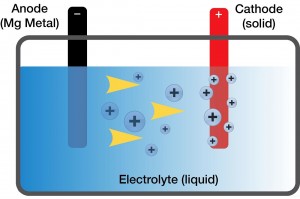 Magnesium is considered a safer, more energy-dense battery material and better than the current lithium-ion. Higher energy density means electronic devices can run longer (and electric cars go faster) but although magnesium is used in industrial applications for fuel cells, the development of magnesium on a mass commercial basis has been limited due to a lack of compatible electrolytes.

This new discovery adds to another potential advancement of battery technology for electric vehicles and consumer electronics but Toyota cautions that commercial application of this could be up to 20 years away. Nevertheless, Toyota is researching this further. The world is becoming increasingly battery-fied and the one who makes the better battery could be king.

This particular research is published in the Angewandte Chemie International Edition journal, entitled “An Efficient Halogen-Free Electrolyte for Use in Rechargeable Magnesium Batteries”.