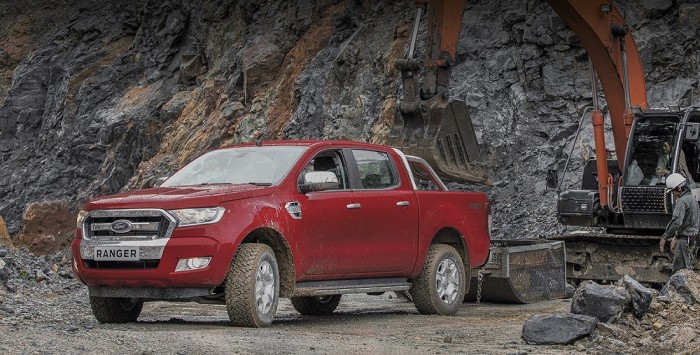 The Ford Ranger proves its Built Ford Tough character at a working limestone quarry in Thailand’s Kanchanaburi province in the second installment of its online documentary series. In a test that explored the outer limits of torque and traction, Ford engineers set out to prove the new Ford Ranger’s towing mastery by dragging more than 50 tons of rock in a wheel-less steel sled over the course of one working day.

“Ranger drivers take their trucks into the world every day and expect them to help them through any challenge,” said Vince Gower, a Ford engineer who oversaw Ranger testing and development at Ford’s proving ground in Australia. “Tests like this help ensure that all the work we put into the new Ranger translates into performance in real-world conditions that our customers are likely to encounter.”

The test employed a heavy-duty steel sled hooked to the Ranger’s tow hitch, requiring an extreme amount of breakaway force to get moving when loaded with 1,000 kg of limestone rock. To track the vehicle’s performance, an industrial-grade load cell was used to measure the force required. The new Ranger was up to the task, making use of its updated turbo, which helps delivers torque at lower revs for instantaneous towing power.

“The finetuning we did on the vehicle’s turbo means we get smoother, more consistent torque through a wider rev range, which improves drivability and means that the Ranger can quickly adapt to different, unexpected conditions,” said Gower. “We’re able to give our customers the power that they need while also improving fuel economy.” 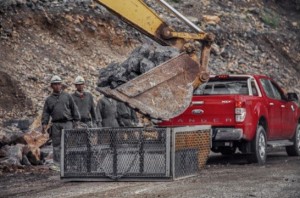 Midway through the quarry test, sudden monsoon rains complicated the situation and raised the stakes. The dirt roads – already a less-than-ideal environment for traction – were transformed to mud. “It was already a low-traction situation, and after the rain the roads turned into a potential towing nightmare,” said Gower. “But the Ranger still did what it was designed to do: get itself out of sticky situations.”

The Ranger relies on a six-speed automatic transmission – which has proven its reliability in millions of Ford trucks around the world – to translate the engine’s impressive power and torque into forward motion, while still delivering refinement and efficiency. In 4WD mode, the Ranger’s transmission control module detects throttle input and instantaneously distributes torque through the transfer case as needed to the front and rear wheels to maintain traction.

Ford engineers performed exhaustive testing and analysis – both virtual and real-world – to verify that the truck was capable of hauling heavy loads, a task that requires more than just a powerful engine. The tow hitch connects to a fully reinforced tow bar that was designed to distribute force through the entire vehicle frame. The tow bar spreads the force to the chassis via two flanges bolted at six points on each side, which distribute the load down the chassis rails and on to the crossmembers. This design helps ensure that the Ranger can handle significant breakaway forces without compromising the tow bar, as well as withstand the shunting effects of braking while pulling a heavy load.

“This was an extremely demanding test and the Ranger really rose to the occasion, towing more than 50 tons of rock in constantly shifting, difficult conditions throughout the day,” said Gower. “We designed the Ranger so the entire vehicle works as a unit to confidently tow serious weight, and dragging this sled full of rock put that capability in the spotlight.”

Check out this episode at: Ford Malaysia’s Facebook Page