The Toyota WOW Road Tour will return this year to thrill Malaysians with stunt driving by pro drivers and many exciting activities. Since the event was first held in 2015, it attracted more than 75,000 visitors to the various venues in Peninsular and East Malaysia.

“Encouraged by the enthusiastic response to the Toyota WOW Road Tour last year, UMW Toyota Motor has decided to have it again. Besides the exciting show of current Toyota models, visitors will also get a sneak preview of the all-new Toyota Hilux,” said Datuk Ismet Suki, President of UMW Toyota Motor Sdn Bhd. 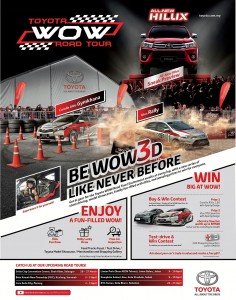 This year will see even more thrilling with the Motorsports theme, where the public could experience the capabilities of the Toyota Vios TRD Sportivo rallying on an off-road course.

Although the Vios is not designed for rallying, the handling it offers over the bumpy and rough course means that it can take any sort of road in the cities confidently. The highly skilled team of drivers will also show off the impressive handling and performance of the Toyota Corolla Altis doing gymkhana on a specially-designed course.

“The stunt driving, which the public can personally experience from inside the cars, is not the only activity. There will also be fun activities for all the family and contests with attractive prizes to be won” said Datuk Ismet.

“And for those who wish to buy a new Toyota vehicle from our comprehensive line-up, let me assure you that there will be exciting deals offered so it’s a great time to make the purchase and save money!” he added.

The Toyota WOW Road Tour will be held at the following 6 locations in March and April:-

At each venue, members of the public will have a chance to participate in the Test Drive and Win contest. Test drive a new Toyota model and get rewarded with shopping vouchers.

Those who book and register a new Toyota vehicle during the event period stand a chance to win a brand new Toyota Corolla Altis 1.8G or Toyota Vios TRD Sportivo in the “Buy & Win Contest” (terms and conditions apply).

Information on the 2016 Toyota WOW Road Tour can be found at www.toyota.com.my.