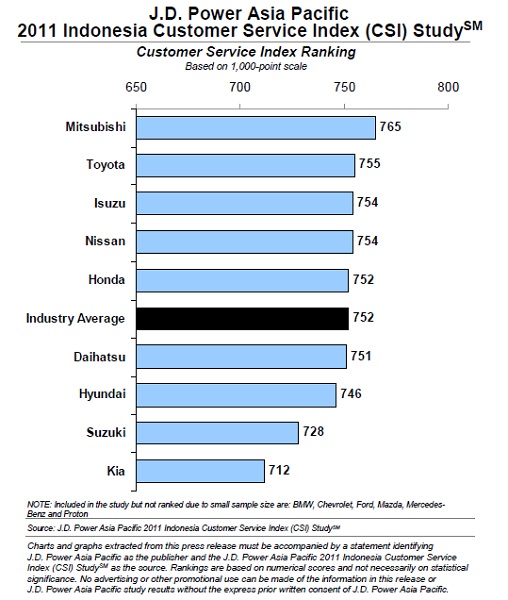 Renowned research house, J.D. Power Asia Pacific, released the results of its 2011 Customer Service Index (CSI) studies in Thailand and Indonesia today. In their 12th and 11th years respectively, the Thai and Indonesia studies help identify behaviours and expectations of consumers in the aspect of after sales relating to their car purchases. J.D. Power also conducts this study for the Malaysian market, the results of which will be published on 1 August.

Not to be confused with two other J.D. Power surveys, the Sales Satisfaction Index (SSI) and Initial Quality Study (IQS), the CSI measures satisfaction among vehicle owners who return to their authorized dealerships for maintenance or repairs to their cars during the first 12 to 24 months of ownership. Five aspects of the service experience are graded upon, which are (in order of importance) service quality, vehicle pick-up, service initiation, service facility, and service advisor.

The results are tallied into an index score based on a 1,000-point scale. In each market, nine vehicle brands were surveyed, with five being common to both markets – Honda, Isuzu, Mitsubishi, Nissan, and Toyota. Indonesia had Daihatsu, Hyundai, Kia, and Suzuki in their list, while Thailand had Chevrolet, Ford, Mazda, and Proton. Between the two markets, Indonesia had a lower industry average of 752 points, compared to 827 in Thailand.

Mitsubishi was the top-ranked brand for this survey in Indonesia with a score of 765, followed by Toyota in second place at 755. Nissan is tied in third place at 754 points with Isuzu, the most improved brand of 2011 with a 16 point jump from 2010. The Thai survey sees Toyota reign supreme, and ‘supreme’ is a very apt choice of a word, as Toyota single-handedly skewed the industrial average upwards – it was the only brand to record an above average score of 838. Second-placed Ford only managed 825. 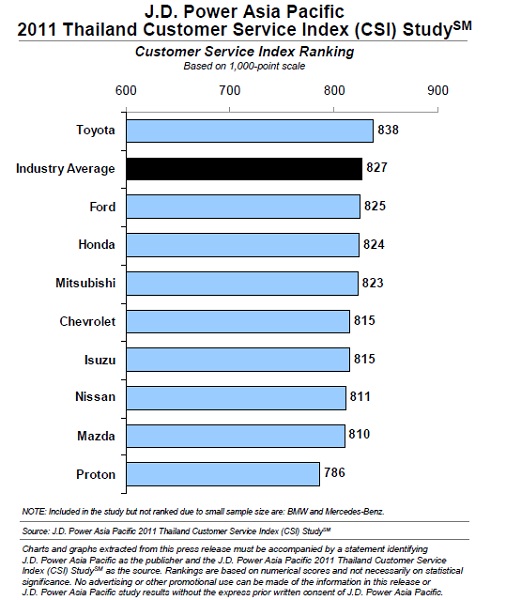 “Information gathered from the customer during the appointment call can be used by the dealership to better plan their service load, check for availability of spare parts and resources and deliver a better service experience to the customer,” he added.

Dealerships are also advised to provide timely service reminders to customers through calls or SMS messages. The study found 34% of customers who are reminded of their service make appointments, compared to only 20% who schedule services without prompting. It was also noted that customers who receive service reminders on average give 27 points higher scores for their service centres than those who don’t. Time to invest on that call centre.

The study also reinforces the adage that good after sales service go a long way to build customer loyalty. Among highly satisfied customers (service satisfaction scores averaging above 795), some 57% indicated that they ‘definitely will’ return to the service dealer even after their warranty expires, this is in contrast to 29% of customers from poor-scoring dealerships saying the same. Indeed, the implications are a little further reaching, as happy customers also serve as convincing brand ambassadors. The numbers say it all – 39% of highly satisfied customers said they will definitely recommend their brand to friends and relatives, compared to 14% of highly dissatisfied customers.

The 2011 Indonesian CSI study was based on responses from more than 2,800 owners who purchased their vehicles between February 2009 and May 2010, and had taken their vehicle to an authorized service centre within the last six months. The study was fielded between February and June 2011. The Thailand study was conducted on a similar timeframe, give or take a couple of months, and had 2,761 participating respondents. 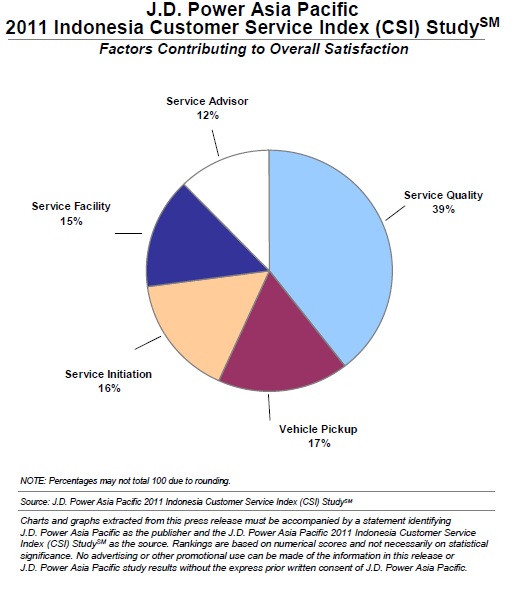 Over in Thailand, the key to customer satisfaction lies in the implementation of service standards at the dealerships, indicating an increasingly discerning market. Loic Pean, senior manager at J.D. Power Asia Pacific, Thailand, said, “As the automotive market changes and customer expectations increase, authorized service centers are making significant efforts in raising their service standards and better addressing customer needs.”

More than half (56%) of Thai customers indicate that they ‘would definitely’ return to service dealers that perform all of 22 service standards examined in the study upon conclusion of their warranty periods. In contrast, service centres that perform 15 or fewer service standards stand to retain less than a quarter (24%) of their customers after their warranties expire. As Penn elaborates, “Increasing service standard implementation generates higher customer satisfaction, which in turn increases customer loyalty and additional revenue for authorized service centers, particularly once the warranty period expires.”

Other factors found to influence Thai customers in selecting their service centres are location and reliability of service. Condition and cleanliness of vehicles upon return are also found to have a considerable impact.

“Ensuring serviced vehicles are returned in the same or better condition as when they were dropped off—in both the exterior and interior—is key to creating perceptions of superior service quality in the eyes of customers and making long-lasting positive impressions,” said Penn. 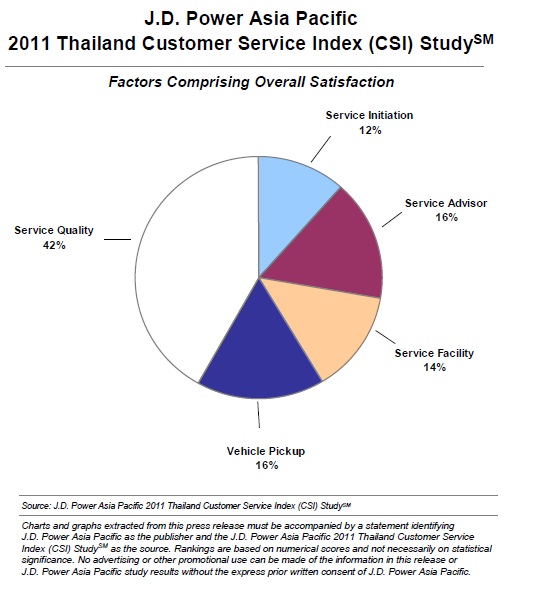