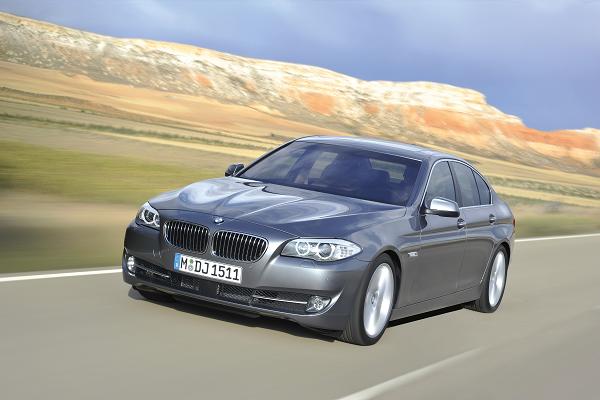 It really wasn’t too long ago that BMW had launched the E60 5-series to huge controversy. Ol’ Chris Bangle had to endure a lot of flak as hardcore BMW fans slammed him left, right, and centre for what was a hugely provocative design. Unlike the elegant and much-loved E39, the E60 was a ‘love-it-or-hate-it’ design, and when it was launched, more had hated it.

We believe it’s because Mercedes stole a march on the Bavarians with the W212 E-class launched to critical acclaim early this year. I was at the new E’s launch for Malaysia earlier this week, and the car is as impressive in person, as it is on paper. The only question marks we have now is how well it drives.

With the F10, BMW is under pressure to deliver like never before. Quite simply, it needs to be bloody good in order to be able to competitively match the W212. So, while we wait for the guys in Cyberjaya to plot the F10‘s entry into Malaysia, let’s examine its credentials. Read on, as I condense an 80 page press release for you.

After being dropped midway through the E39’s life cycle, the 528i badge is now restored to the 5-series’ lineup for the F10. It is part of a lineup consisting of four petrol, and three diesel powerplant options. The range topper is the petrol-powered 550i, with a 4.4-litre turbocharged V8 engine.

The six-cylinder petrol variants, meanwhile, are led by the 3.0-litre turbo 535i, followed by the 528i and 523i, both featuring the same 3.0-litre straight six NA engine in different states of tune. The oil burner range starts with the four-cylinder 520d, then continuing with the six-cylinder 525d and 530d. All variants, petrol & diesel, get BMW’s High Precision Injection (direct injection) as standard. 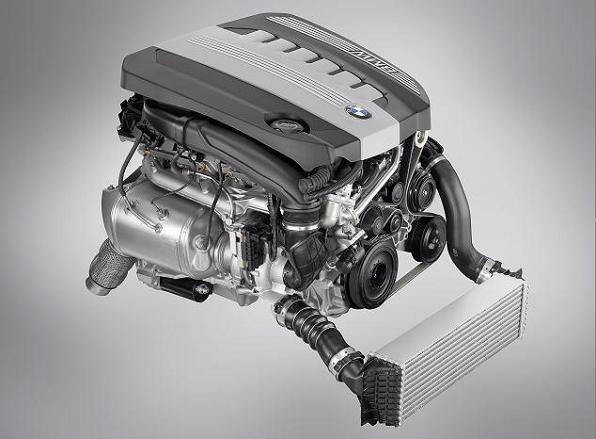 The engine’s architecture aligns the two cylinder banks at right angles to each other, with the two turbos and catalytic converter sitting right in between. This design feature, according to BMW, shortens the distance between the turbo and intake manifold, ensuring greater responsiveness.

The flagship six-cylinder variant, the 535i, meanwhile, gets the single turbo (don’t be confused by BMW’s insistence on calling it TwinPower Turbo Technology) 2,979cc N55 B30 straight six which debuted in the 535i GT earlier this year. The blower, however, is of the twin scroll variety, and working in conjunction with VALVETRONIC, the 535i is good for 306hp @ 5,800 rpm and a considerable 400Nm @ 1,200 – 5,000rpm. 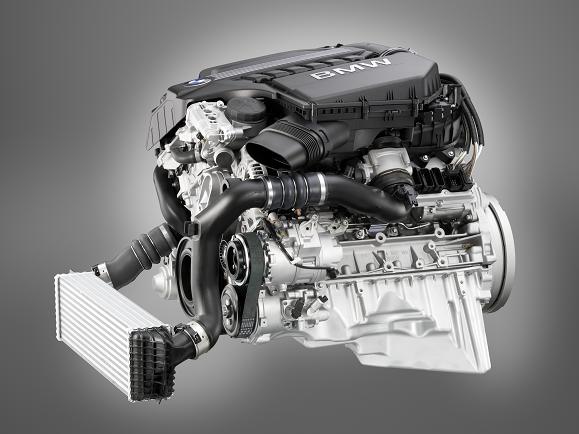 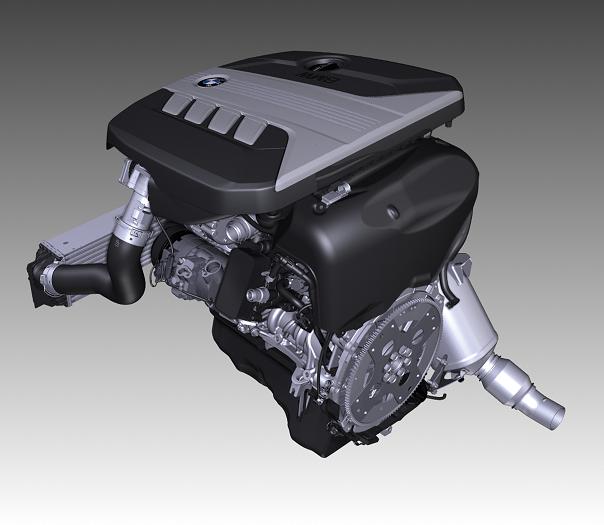 All models, except the 550i, are mated to six-speed manual transmissions as standard. The gearboxes in the 535i, 525d, and 520d use dry-sump lubrication, while the 530d, 528i, and 523i use conventional oil supply. The 550i gets a ZF-sourced 8-speed automatic transmission as standard. This all-new electronically-controlled transmission is optionally available in all of the other variants as well.

Additionally, all of the F10’s powerplants are compliant to EU 5 emissions as standard, with the 530d optionally available with BMW BluePerformance technology to go EU 6. 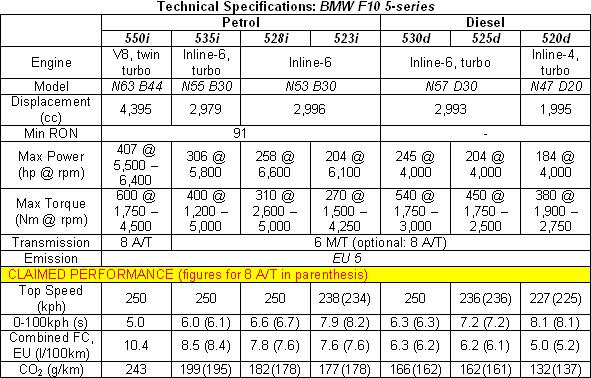 In terms of styling, the F10 has some difficult acts to follow. Even today, the E39 5-series is still easily the best looking modern BMW. It is one of those rare classic shapes which can be suitably tweaked to portray aggression or elegance with equal effectiveness.

Although the E60 failed to replicate the natural grace of the E39’s timeless design, it was very boldly styled. No doubt the E39 is still the better looking car, but no car has influenced styling quite the same way the E60 did. With its unashamed tendency to flaunt curves, the E60‘s styling cues are probably among the most aped both among manufacturers and aftermarket stylists.

Six generations of the 5-series

With the F10, BMW seemed to play a safer route than they did with the E60. While it’s not a blandly styled vehicle by any means, it lacks the shock and wow factor of its predecessor. We hope it’s simply a case of the F10 not being photogenic, because none of the pictures we went through grabbed our eyes the way the E60 did.

The front three-quarter shots show the picture of a handsome car. In fact, BMW has already given us a preview of the styling elements they were planning to use in the E90 3-series facelift, most notably the creased bonnet and the character lines of the front bumper. From the front, it looks like an enlarged E90 plastered with the F01’s amplified kidney grille. 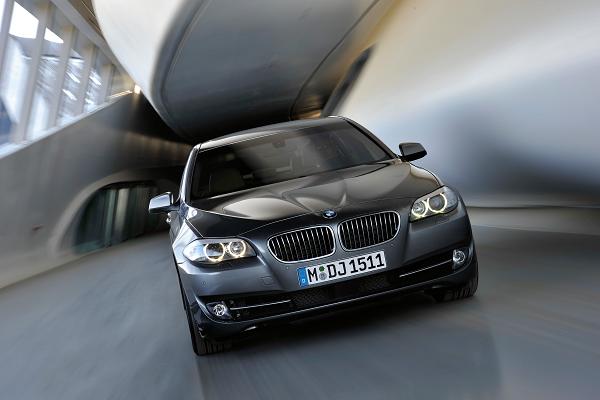 Styling is less controversial than E60.

Along the flanks is an eye-catching contour line running back from the front fender, along the door handles and then meeting with the taillights which seemed to have been derived from the Infiniti G35 sedan. Oh yes, Nissan might be blushing already. 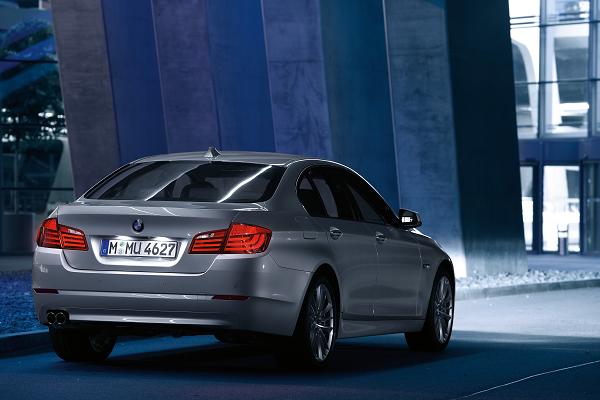 This really reminds me of an Infiniti

Inside, official pictures of the cabin show a cabin which is unmistakably BMW. Through the camera lens, the F10’s cabin seemed massively improved over the E60, making the predecessor’s cabin looking dull by comparison. Where the E-class caters for the rear-seating towkays with some markets offering individual rear seats (not available in Malaysia), the 5-series puts the focus on the driver in typical BMW fashion.

A central feature of the dashboard is the 7o inclination of the centre stack towards the driver, ensuring that the person behind the wheel has complete control of all the car’s faculties at all times. 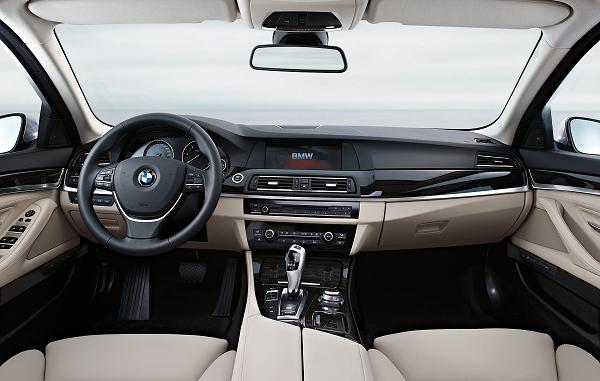 In the press release, BMW was at pains to point out that the F10’s 2,968mm wheelbase is the largest in the class. We’ve checked BMW’s claims against figures from Merc, Lexus, and Audi, and found the F10 exceeds its competitors wheelbase by about 100mm each. Only the Audi A6 beats it for length, and the new Bimmer also happens to be taller and wider than its rivals too.

Being developed in parallel with the F01 7-series ensured that the F10 received its fair share of toys trickled down from the big brother. Residing in the instrument cluster is the same Black Panel illuminated meters found in the 7. 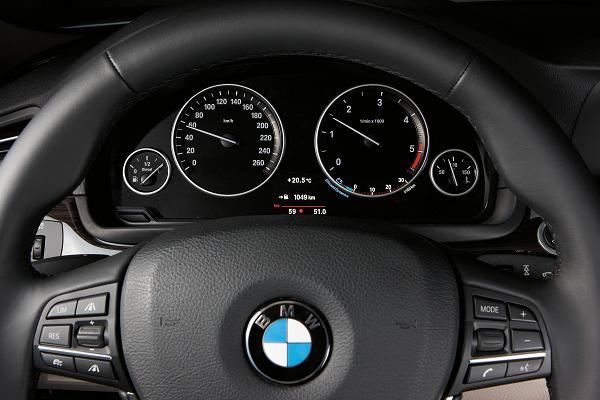 Black Panel display one of many toys inherited from big brother 7.

Other tasks taken up by the BMW ConnectedDrive system include traffic information, phone calls, and even internet access – with web-browsing and email service also particularly highlighted. So, what’s next? Facebook and Twitter?

For those who are what we Malaysians call ‘fail side parking’, the BMW Parking Assistant actually relieves the driver of the need to perform the task him/herself. All you have to do, is to drive along side the banks of side-parking spots at no faster than 35 kph. The system beeps you when it detects a space longer than the car by 1.2 m. After that, slot into reverse, manipulate the accelerator and brake appropriately, and let the computer do the steering for you. 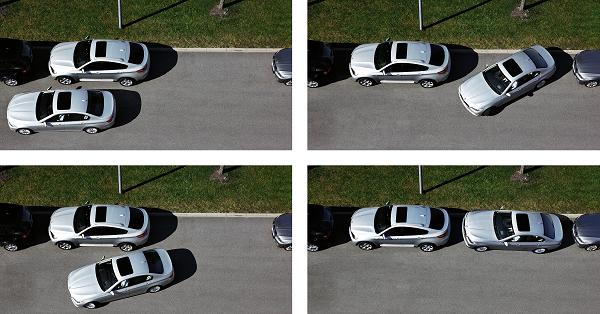 On the highways, the Active Cruise Control system has control of both throttle and braking, automatically slowing down when detecting bends and downhills. The optional Stop & Go function on top of the ACC adds auto distant control to ensure breathing room between you and the car in front. It even stops the car for you if it deems necessary.

At night, the BMW Night Vision system incorporates thermal imaging system which usefully detects living objects. If the system calculates that any of the objects, notably people, are on a collision course, it blares a warning on the dash and heads-up display. I definitely see the use of this thing in trunk roads, where cows and buffaloes actually sleep in the middle. 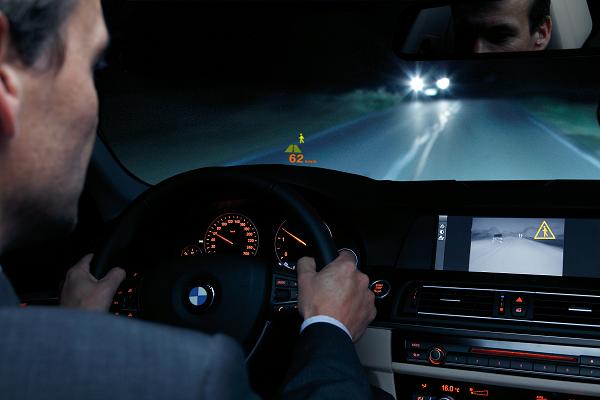 As always, the highlight of BMW cars have always been in their sturdy chassis engineering. BMW claims that, on a whole, the F10’s chassis is 55% stiffer than the E60’s. Construction materials include extensive usage of, and I quote from the press release, high-strength multi-phase steel, ultra-high-strength hot-moulded steel, and aluminium.

The body panels are comprised mainly of aluminium. BMW claims that just for the doors alone, opting for aluminium in place of conventional steel has saved the F10 23kg on the scales. Apart from the doors, the bonnet, front fenders, and front spring supports are all-aluminium. 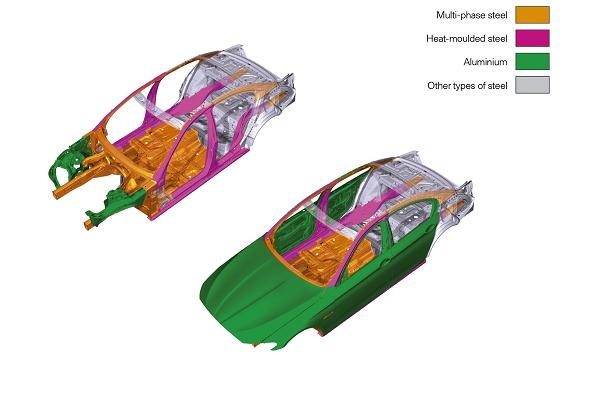 Composition of the F10’s structure.

The F10’s longer wheelbase has also given room for BMW to position the engine further behind the front axle, enabling them to stay as close as possible to their dream 50:50 front/rear weight distribution. Following in the direction set by the F01, the F10 features aluminium double wishbone suspension up front, while the rear is sprung by a multi-link setup dubbed Integral V by BMW.

Supporting the already mechanically sound setup is the BMW Adaptive Drive system, which comprises of the Dynamic Damper Control and Dynamic Drive anti-roll system. The damper mapping itself can be set by the driver using the Dynamic Drive Control to vary between comfort, normal and sports modes.

There’s a touch of irony that while Mercedes continues with a hydraulic steering system for the E-class, BMW has opted to equip the F10 with electric power steering for all variants. On paper, we favour Merc’s approach, but considering BMW’s obsession with driving dynamics, it is entirely possible that they have cracked the one big issue with EPS – lack of feedback. The press release promises ‘authentic steering feedback’, only a test drive would tell. 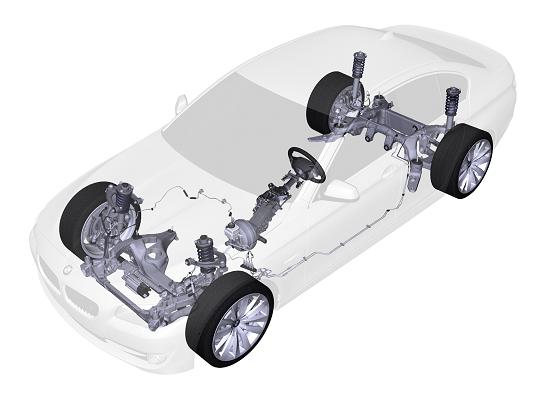 Optionally available with the F10 is Integral Active Steering, carried over from the 7-series. It combines the Active Steering system of the front axle with a smaller angle rear-axle steering. 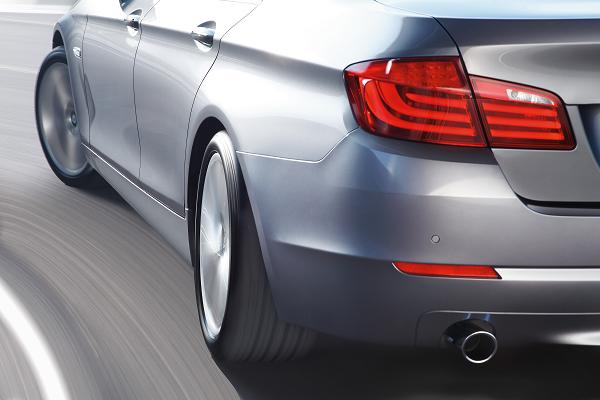 Integral Active Steering turns rear wheels by up to 2.5o

The F10 is set to commence full production in BMW’s Dingolfing plant in early 2010 together with the 5 GT, 6-series, and 7-series. Word is that it would go on sale in Europe by March 2010. If that goes on schedule, I am expecting to see it in our shores by third quarter of 2010.

We can almost guarantee that the first batch of F10s going on sale here will comprise of an all-petrol, and of course, all-auto lineup. However, with BMW Malaysia’s management actively pushing for diesel power, the 520d should be arrive at some point in time as well.

A point of concern for the F10 is that the High Precision Injection engines may not be suitable for the fuel dispensed through our pumps. We know that Mercedes had to retune the E-class CGI engines before launching the W212 here, so BMW might have to embark on a similar exercise or introduce the F10 with slightly older powerplants here.

We are curious to see if BMW Malaysia would bring in the 523i and  the 528i with the 3.0-litre engines, which puts the F10 at a disadvantage in terms of  road tax compared to the 1.8-litre E200 and E250. The official press release made no indication of further variants to be added to the range, though I would suspect that BMW has at least one smaller petrol powerplant for the Asian market, probably to be badged as a 520i.