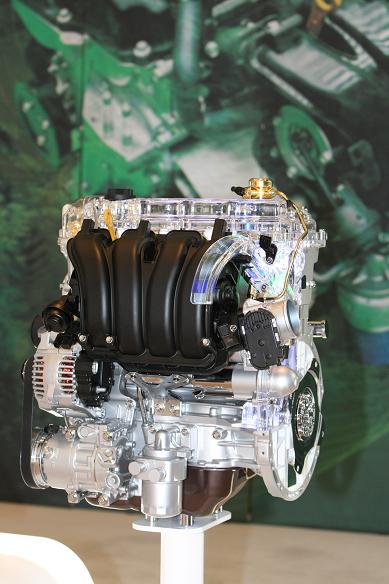 In the presence of some 600 specialists, Hyundai has unveiled the new 2.4-litre Theta II engine at the ongoing 9th Annual Hyundai-Kia International Powertrain Conference. Equipped with Gasoline Direct Injection, the aluminium block Theta-II is rated to produce 198hp @ 6,300rpm and 250Nm @ 4,250rpm for the Korean Domestic Market.

In the Theta II GDI, fuel is directly injected into the combustion chamber at 150 bar in a two-phase injection process. The first of the two stages is what Hyundai calls the pilot injection, where a small amount of fuel is injected and ignited to send the piston downwards, triggering the power stroke. Then, in the second more powerful main injection phase, more fuel is injected and ignited. Hyundai claims that this split-injection technique ‘reduces loading on the catalytic converter and helps reduce emissions’.

Hyundai further claims a 7% and 12% improvement in low and high-end torque respectively when comparing the GDI against an non-GDI engine of equivalent displacement. Mileage improvements are claimed to be as high as 10%.

Additional innovations in the second gen Theta engine include a three-stage variable induction system, which varies the air-intake volume to ensure an optimal air-fuel mix under any engine load condition. Both the intake and exhaust valves are controlled by Hyundai’s Double Continuous Variable Valve Timing (DCVVT) system governed by a steel chain system.

Further innovations seen in the Theta II include various weight saving efforts such as a redesigned crankshaft and reinforcing of the engine block without adding further weight. Internal friction of the engine is reduced by switching from a fixed-type piston pin to a fully floating design.

According to Hyundai, the Theta II engine is expected to debut in the new Sonata during the first half of next year.