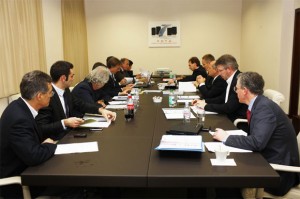 BREAKAWAY FACTION: The Breakaway 8 discussing their move in light of Bernie Ecclestone and Max Mosley’s recent rule changes that they feel are unacceptable and stifle the sport

For the longest time, everyone , well nearly everyone has been complaining that Bernie Ecclestone has had a iron grip on F1 and he keeps tightening it every year.

Teams complain they don’t receive enough Tv and other commercial money from sponsorship of the championship while track owners complain that they have to fork out STG10 million to host a race.

So when the regulations wrangling got ugly this year, the Formula One Teams Association (FOTA) decided enough was enough and raised their threat to form the breakaway series again but this time they appear to be genuine in carrying it out.

The eight teams that want to form the breakaway series are Ferrari, McLaren, Toyota, Renault, BMW, Brawn, Red Bull, Toro Rosso and they had a meeting at Renault’s HQ in Enstone and decided that they can no longer take whatever it is that Bernie and Max are dishing out.
Below is part of their Press Release

“The teams cannot continue to compromise on the fundamental values of the sport and have declined to alter their original conditional entries to the 2010 World Championship.

“These teams therefore have no alternative other than to commence the preparation for a new Championship which reflects the values of its participants and partners. This series will have transparent governance, one set of regulations, encourage more entrants and listen to the wishes of the fans, including offering lower prices for spectators worldwide, partners and other important stakeholders.

“The major drivers, stars, brands, sponsors, promoters and companies historically associated with the highest level of motorsport will all feature in this new series.”

They are even initiating talks with Dorna’s Carmelo Ezpeleta to find out if his company can provide turnkey organisation for the new series. Dorna runs FIM’s MotoGP very successfully.

With only Williams staying on in F1 and no one can be sure that they adn other teams would not jump ship anytime soon so all fans are holding their breath to see how this problem will be solved.

Suffice to say FOTA’s suggestion will lower the costs for fans, track owners and maybe even sponsors but without restricting technological advances. FOTA is also keen to have more teams taking part.

I say dump Bernie and start fresh, if Bernie wants you guys back in, squeeze him for all he is worth, no sport should be such an exclusive domain of one person, no one should have so much say in a championship that involves thousands and are loved by hundreds of millions of people around the world.