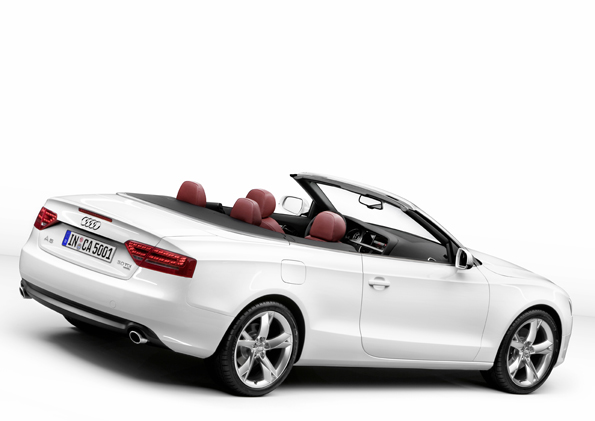 After launching the stunning A5 two-door coupe, Audi has quickly followed it up with a cabriolet version, unveiled for the European market back in December 2008. Featuring a fabric top and a similar lineup to the coupe version, the A5 Cabriolet will start to find its way into homes by the second quarter of 2009.

Customers will have a mind-boggling number of possible drivetrain combinations to consider. There are five engines – three petrol and two diesel – to choose from, and customers can pair them with a conventional 6-speed manual, the Multitronic CVT or the VW Group’s famous 7-speed Direct Shift Gearbox (DSG), named S-Tronic in Audi applications. Power can be sent either only to the front wheels, or to all four via Audi’s famous Quattro system.

Unlike the BMW 3-series Convertible, the A5 does not get a folding metal roof, and will have to make do with a fabric one. The powered top opens in 15 seconds and closes in 17. There’s also the option of an acoustic top, which Audi claims to reduce wind noise “almost to the hardtop level.”

The Audi A5 Cabriolet

Up front, the cabrio retains the same handsome fascia as the coupe, with the big Audi corporate grille flanked by a pair of intricately designed headlights. The side view is a standard cabriolet profile with only the wind screen and four headrests rising above the car’s shoulder. Like most cabriolets, when viewed from above, it has a sort of tub-like look when the top’s down. Depending on engine version, the A5 Cabriolet comes standard with 16″ or 17″ alloy wheels, but buyers can choose to upsize their rims to diameters of 18″, 19″ or 20″. 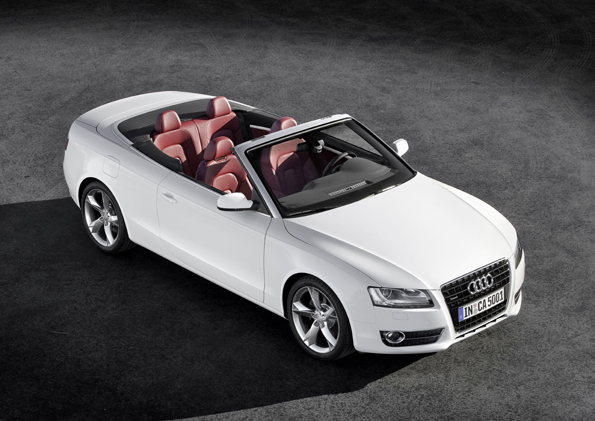 The taillights, which comes with a distinct LED pattern, are of a markedly different design from the A5 coupe and much better looking. It actually looks more like the taillights of the A4, although it becomes clear upon closer inspection that they are not the same. However, it does appear, from the photos at least, that the taillights of the coupe and cabriolet versions are interchangeable. The third brake is mounted to the tip of the bootlid 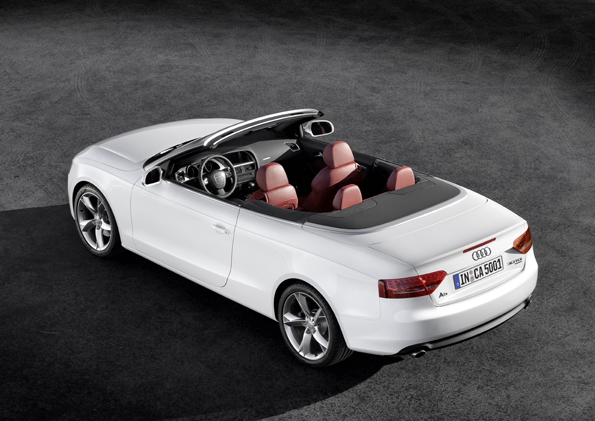 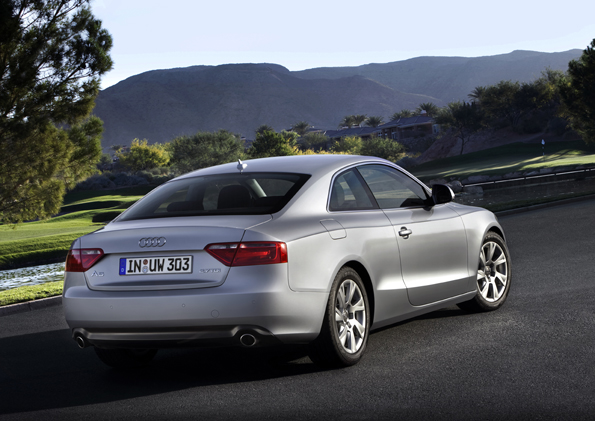 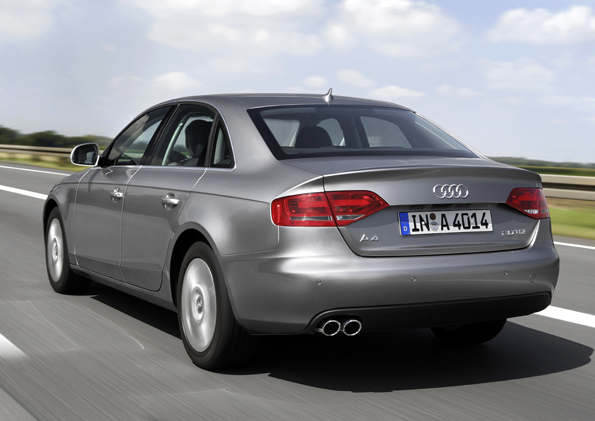 Its closest rival, the BMW 3-series comes with a folding metal roof as standard, so Audi needs plenty of good reasons to justify not putting a hardtop as well. That it ‘fits smoothly into the design profile’ is probably something made up by press relations, but that it is lighter in weight is a sufficiently valid reason. Not only is the roof material itself lighter than a metal top, but also the folding mechanism can be made less complex.

The top consists of three layers. Buyers can specify four colours for the outer layer and three for the inside layer. The middle layer is a cushioning pad, which can be replaced by a 15mm thick foam layer – forming the acoustic top, which is claimed to reduce wind noise to almost hardtop levels. The powered top, which takes 15 seconds open and 17 seconds to close, can be operated at speeds up to 50kph. When retracted, the top occupies 60 litres of boot space, reducing luggage carrying capacity from 380 litres to 320 litres. 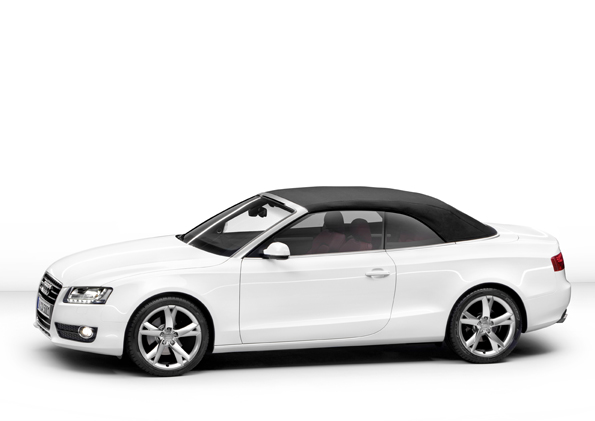 The entire front dash assembly and design of the A5 Coupe is carried over here unchanged. The pictures show the interior of a left hand drive unit with the MMI unit, but expect RHD versions to look little more than just a mirror image of this one. There’s little to fault this dash. The LCD screen is nicely integrated, but the sheer amount of buttons surrounding the gear lever gives the centre console a cluttered look. 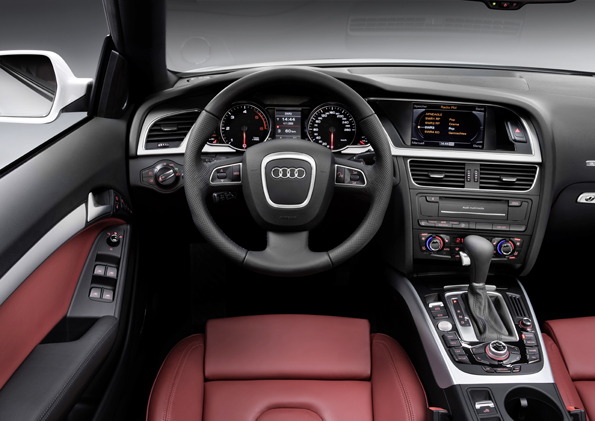 Fine dash, but too many buttons around gear lever gives cluttered look.

The Audi Multi Media Interface (MMI) operating system comes with either one of the two navigation systems available. Of course, just like how BMW claims the iDrive, and Mercedes the Comand, the Audi press release proclaims the MMI to be the best solution in the market – yes, I am sure they all are. Both versions come standard with 3D image navigation, versatile memory card reader, and DVD drive. The more expensive version, the MMI Navigation Plus, is equipped with a high-def monitor, on-board hard drive, and integrated to a Bang & Olufsen sound system and a digital TV tuner.

The standard seats that come with the car are mounted low. The English version of the press release homourously translates this from German calling it ‘the low standard seats’, but credit to Audi AG, their press department responded within 15 minutes after I emailed them of this glaring error. Electric seatbelt extenders are standard, and there are options for firmer sports seats, electric adjustment (not standard?), and the aforementioned climate-controlled seats.

The rear seats appear to take two passengers with sufficient comfort. It can be optioned with a dividing centre console equipped with two cup holders. They can be 50:50 split-folded to join the passenger compartment with the boot, creating 750 litres of storage – hardly impressive figures, but still useful all the same. 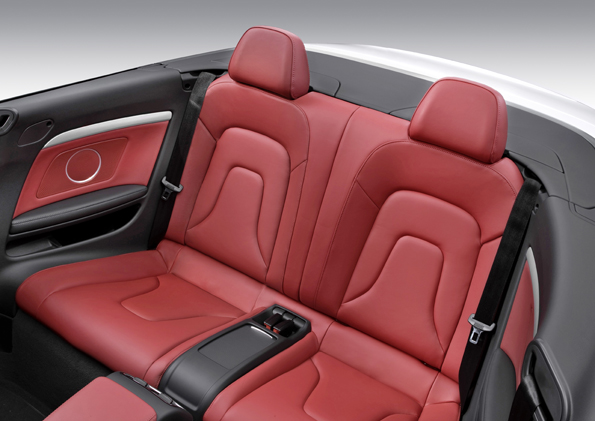 As mentioned earlier, the A5 Cabriolet is comes with a choice of five direct injection engines – three petrol and two diesel. Except for the 3.2 FSI engine, which complies with EU4 emission regulations, all the others are compliant with EU5 standards. On paper, they also look deliciously driveable with the maximum torque available at sub-2,000rpm engine speeds on a plateau well into the mid-range.

The petrol range starts with the 160hp 1.8-litre TFSI and followed by the 2.0-litre TFSI engine in two states of tune: 180hp/320Nm and 211hp/350Nm. The 180hp version engine is available only in front-wheel drive guise, paired with the Multitronic CVT. The more powerful 211hp version comes with the option of Audi’s famous Quattro all-wheel drive system paired together with the 7-speed S-tronic twin clutch transmission. Otherwise, this engine can also be paired a front-wheel drive drivetrain, featuring either a conventional 6-speed manual or the Multitronic.

There are also two V6 turbodiesel models to choose from: 2.7-litres and 3.0-litres; the 2.0 inline-4 TDI found in the coupe will not be offered for the cabriolet. The 2.7 is rated at 190hp and has 400Nm of torque available from 1,400rpm to 3,250rpm. It is available only in front wheel drive guise, whereas the 240hp 3.0-litre diesel is only available with the Quattro setup, as the peak torque of 500Nm @ 1,500-3,000rpm would probably be too much for the front wheels to handle by themselves.

On top of the range is the naturally aspirated 3.2 V6 FSI engine that generates 265hp of power at 6,500rpm. The figures show that this engine, being the only naturally aspirated one in the range, has a far more peaky character than the other turbo engines – torque being a mere 330Nm @ 3,000 – 5,000rpm. It can either be available in front-wheel drive (with Multitronic) or in Quattro form (with S-tronic).

Unfortunately, if the A5 does eventually come to Malaysia, it’s unlikely that we will see anything above the 180hp version of the 2.0 TFSI. As it stands, the only versions of the A4 and A6 available here are the entry level 1.8T and 2.0T respectively. However, you’re not getting a slouch though. The 180hp A5 does 0-100kph in 8.9 seconds, on the way to a respectable 219kph top speed, while returning a (claimed) fuel consumption figure of 7.4 litres / 100km (13.4km/l).

I recently tested the facelifted A6 2.0T rated at 170hp / 280Nm, and it still provided very rapid acceleration when paired with the Multitronic CVT – more than enough grunt to murder the BMW 523i. As such, I would expect the lighter A5, even at entry level having its engine in a more powerful state of tune, to have more than sufficient go.

Like every other chassis design that comes out these days, the one underpinning the A5 is claimed to provide class-leading ride and handling quality – meeting that perfect balance between sportiness and comfort. It features an advanced suspension setup, adaptive shock absorbers, massive disc brakes all round, and even the option of variable ratio steering.

The suspension setup of the A5 features extensive use of aluminium construction. Up front, the it features a five-link axle, while the rear end is supported by a trapezoidal link axle – a setup which Audi (naturally) claims to give ‘a smooth ride and maximum driving stability’. Audi also claims a ‘perfect distribution of axle loads’, though what they meant by ‘perfect’ is pretty much open to interpretation.

A hydraulic rack-and-pinion power steering comes as standard, with the option of upgrading to the variable ratio servotronic system. The servotronic works in conjunction with the Audi Drive Select system and features a superposition gear that varies the steering ratio by as much as 100% depending on driving speed.

The Audi Drive Select dynamic management system allows drivers to switch between three settings, varying engine mapping, fuel feed, transmission shifting points (for S-tronic & Multitronic only, obviously) and even the steering operating mode to give a varied driving experience. Buyers who go for the MMI can even programme their OWN preferred mapping – talk about ride customization.

At the top of the line is the high performance S5 variant, powered by a supercharged 3.0 V6 TFSI engine rated at 333bhp. Like the standard A5 engines, this one also boasts an impressively strong mid-range, with a maximum torque of 440Nm available between 2,900rpm and 5,300rpm. This is almost equivalent to the 4.4 V8 that powered the now discontinued BMW 545i and 645i.

The engine channels all its power to all four wheels via the Quattro system mated to the 7-speed S-tronic, and is available with an optional sport differential. Audi claims that the S5 will hit 100kph from rest in 5.6 seconds, with top speed electronically restricted to a European standard 250kph. Fuel consumption is claimed to be an impressive 9.6l / 100km (10.4km/l), though Audi is honest enough to admit that this is a preliminary figure.

As mentioned earlier, European buyers will begin to take delivery of the A5 Cabrio in the second quarter of this year. Prices start at EUR 37.3k (RM173k) for the manual 1.8T. There is no sign of its impending arrival in Malaysia, but if it does, expect to see a 1.8T with Multitronic priced in the region of RM270k* or a 2.0T with Multitronic priced at RM300k*.