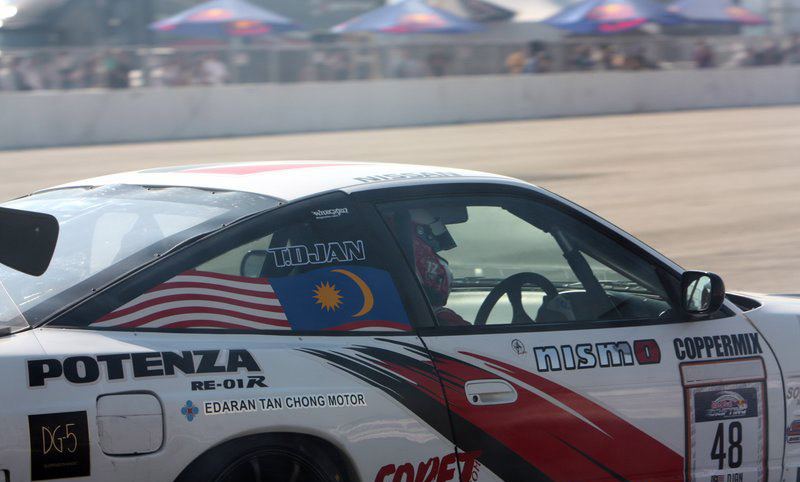 Tengku Djan falls to Sam Hubinette in best of 16

Th recently concluded Red Bull Drifting World Championship handed the crown to Rhys Millen, a veteran campaigner who races everything from track to to rally to hillclimbs.

Local hero Tengku Djan Ley made it past the the group of 32 but was beated by two times Formula Drift Champion Sam Hubinette who then went on to finish fourth in the championship. Djan was finished fifth in the 2006 D1 GP All Star World Series. 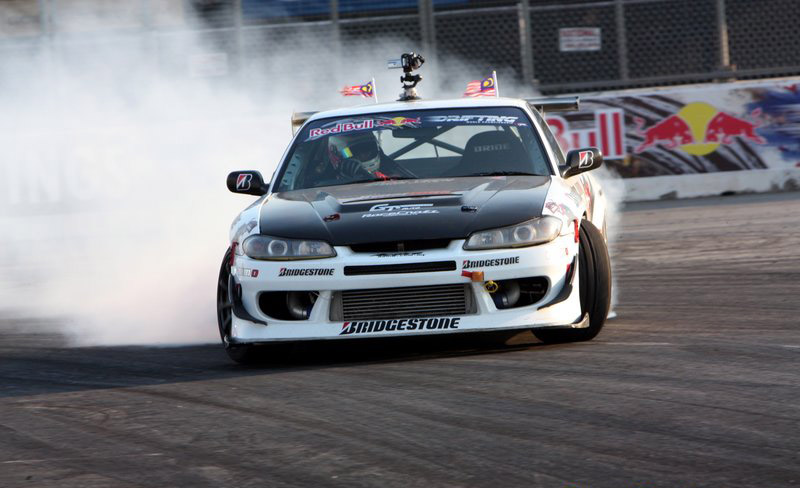 Hubinette was beaten by eventual runner up Daijiro Yoshihara 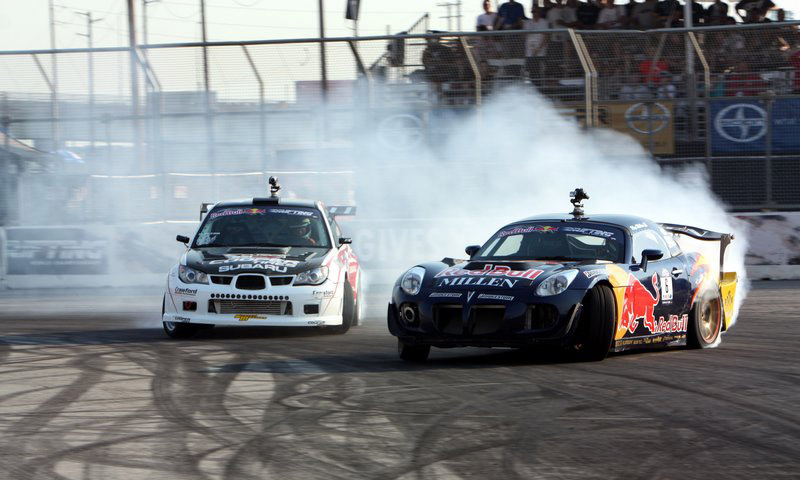 The host of Top Gear America and regular drifter, Tanner Foust was the other semi finalist and he fell to eventual champion Millen.

Below is the full Press Release

Long Beach, Calif. – November 16, 2008 – Rhys Millen won the title of “World Champion” at the inaugural Red Bull Drifting World Championship. History was made with the top drifters from around the world competing for the largest prize purse in drifting history at the Port of Long Beach.

17 past and present drifting champions from the top drifting organizations in the world gathered in Long Beach, CA for the first Red Bull Drifting World Championship. First place qualifier Rhys Millen and his Red Bull Pontiac Solstice outperformed the competition to win the largest single prize of $25,000 in drifting history. Teammate Daijiro Yoshihara and his Bridgestone / RMR Pontiac GTO took home the 2nd place prize of $15,000 and the 2007 and 2008 Formula DRIFT champion, Tanner Foust and the Rockstar / AEM Nissan 350Z took home 3rd place overall and $10,000.

“To come up after one of the most challenging years in Formula DRIFT and finish in the top 3 and then to be the marquee driver at this premiere event and take the Red Bull Drifting Championship outright is a feeling I have never had before,” says Rhys Millen, Formula DRIFT driver and event winner. “To stand on the podium with teammate Daijiro Yoshihara at this event to end the season is fantastic, what more could you ask for?”

Gathering at the Port of Long Beach were the top drivers that compete from Formula DRIFT, D1GP, D1 New Zealand, DMCC, Drift Australia, EDC, FD Singapore, IDS, Nordic Drift, New Zealand Drift, and Pro Drift. This was a battle of the champions and Formula DRIFT 2005 champion Millen came out on top.

“All the teams, fans, sponsors, supporters and especially Red Bull and the City of Long Beach made the Red Bull Drifting World Championship truly historical event,” said Jim Liaw, president and co-founder of Formula DRIFT. “We were able to bring the entire drifting world together under one roof and made for one of the best drifting competitions ever.”

The event was held at a special venue on the Port of Long Beach that featured a purpose built drifting track that was highlighted by a very fast entry and 6 technical turns. Event winner Millen set the speed bar high by also claiming the highest entry speed of the event with a speed of 103.7 miles per hour during the finals. The track proved to be challenging with many drivers falling victim to the walls and barricades and other drivers stepping up to show off their total car control.

The level of competition was at an all-time high and created one of the most exciting events in drifting history. The Top 32 drivers battled round by round and the semi-finals pitted (4) Formula DRIFT drivers against each other. Yoshihara got the best of 2-time Formula DRIFT Champion Samuel Hubinette in the Nuformz / Mopar Dodge Viper placing him into the Finals. Current Formula DRIFT champion Tanner Foust battled against Rhys Millen, with Millen coming out on top. The consolation round with Foust and Hubinette was a close fought battle, but Foust’s consistent driving proved to be the deciding factor placing him in 3rd place. The final battle between teammates Millen and Yoshihara was a close fight, but Yoshihara decided his fate with a spin in the last round, giving the inaugural Red Bull Drifting World Championship to Rhys Millen.For more information visit www.formuladrift.com.