But the pistons have to stop at just the right place

Mazda calls this system the Smart Idle Stop System or SISS and what makes it so smart is the simplicity of the concept.

Now that I have seen it, I am baffled why no one has thought of it before.

As you may already know, conventional stop-start systems rely on an extra large starter motor to restart the car once you release the brake pedal or put it in gear after a long stop at the traffic light or something.

In case anyone is asking the four strokes of the Otto cycle are induction-compression-combustion-exhaust.

What Mazda did was use very precise electronics and the starter motor to stop the engine at a precise crankshaft position so that it has pistons that are just about to begin the combustion cycle, i.e they are just slightly past their top dead centre and are holding back compressed air and a bit of fuel.

When you lift your foot off the brake pedal or put the car in gear, the electronics simply inject some more fuel into the combustion chamber and give it spark. The kick from this one piston then gets the ball rolling for the engine.

Mazda claims that the engine would restart in 0.35 seconds, faster than anything else on the market.

The question is this, how tightly will the piston rings have to sit against the bore liners so that all that compressed air, which is typically between 10 and 11 times of atmospheric pressure- depending on the engine’s compression ratio, would not start leaking into the crankshaft.

I am going to assume that no one can provide perfect sealing between two moving parts without creating so mcuh friction to make the engien itself inefficient and a disaster waiting to happen, so the next question is this: How long can the piston rings hold the pressure in?

Next question: If the piston rings now sit tighter against the cylinder bores, how much extra friction is it generating and how does this affect fuel economy?.

And here is something totally unconnected to the story, a picture of the Furai concept car, just because I think it is gorgeous.

Anyway, the full Press release is below. 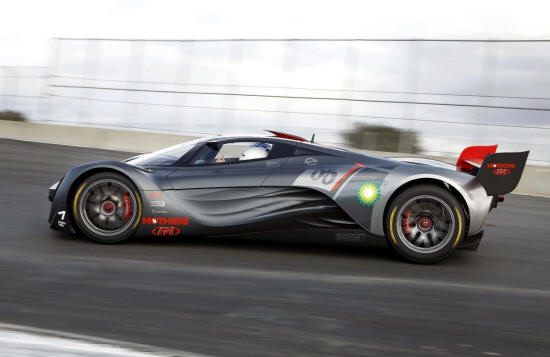 Mazda Motor Corporation has independently developed an idling stop system, called the Smart Idle Stop System (SISS), which improves fuel economy by about ten percent (in Japan’s 10-15 mode tests*1) in urban areas where vehicles frequently stop at traffic lights or in heavy traffic during operation. The SISS uses direct injection technology to achieve an excellent engine restart, ensuring drivers do not experience any discomfort with the new system. Mazda plans to introduce this core environmental technology to the marketplace in 2009.

Idling stop systems save fuel by shutting down the engine automatically when the car is stationary, and restarts it when the driver resumes driving.

Conventional idling stop systems restart a vehicle’s engine with an electric motor using exactly the same process as when the engine is started normally. Mazda’s SISS, on the other hand, restarts the engine through combustion. Mazda’s system initiates engine restart by injecting fuel directly into the cylinder while the engine is stopped, and igniting it to generate downward piston force.

In order to restart the engine by combustion, the pistons must be stopped at exactly the correct position to create the right balance of air volume in each cylinder. The Smart Idle Stop System provides precise control over the piston positions during engine shutdown to accomplish this. The SISS indexes each cylinder and initiates fuel injection before the engine begins to rotate. This enables the engine to be restarted in just 0.35 seconds*2, roughly half the time of a conventional electric motor idling stop system.

In addition to saving fuel, Mazda’s Smart Idle Stop System ensures that the engine will restart quickly and with exactly the same timing every time. Drivers will feel no delay when resuming their drive, which means they can enjoy a comfortable and stress-free ride.

*1 The 10-15 mode test is the Japanese standard for emission certification and fuel economy for light duty vehicles. It consists of two separate drive cycles. The 10-mode drive cycle is a low speed drive cycle test, while the 15-mode is a higher speed assessment.
*2 For vehicles with automatic transmissions. Restart times measured by Mazda.