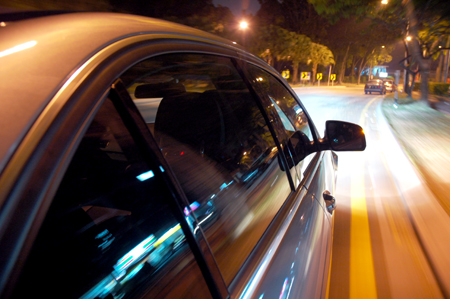 We humans rely a lot sight to keep ourselves safe. Vision is probably the most important of the five senses when it comes to safe interaction with the world at large because it is the most direct method of achieving spatial orientation.

When night falls we have to resort to a different set of sensors in our eyes, instead of using the colour-sensitive receptors we rely more on the ones that help us judge contrast, i.e we go on black and white mode.

The black and white mode has several restrictions, firstly it impairs our judgment of depth of field and by virtue of this we are also less sensitive to objects in our path. At night everything moves more slowly.

This applies to driving as well.

Where I live, there is a small but bustling commercial cluster among residential homes and as such we get a lot of non-locals passing through and these people seem to lack the sensitivity to the safety concerns of the people who live there.

They drive fast at all times. City Hall has put up a series of speed breakers on many of the roads there but there are still drivers who are intent on breaking some land speed record on these roads.

These same drivers seem to have extra sensitive night vision because the dark does not seem to slow them down. It is quite disturbing.

Look at the picture above and you will see that even with the best lighting technology on the Mercedes-Benz C-Class and ample street lighting, the driver’s vision is restricted to less than 100 metres. Sure we can still see beyond that distance but we simply cannot really pick out details joggers, children crossing roads and such.

On residential roads it is best to keep speeds of less than 40 kilometres per hour, anything beyond that is simply inviting danger. In fact going faster than 40km/h in residential areas are probably more dangerous in the daytime because there are more children about.

Just remember that if you hit someone, no amount of apologising is going to be enough and you will have to live with the guilt of ruining someone’s life and the life of those they love.

When the sun sets, slow down and take it easy. You are not going to impress anyone by going fast, you are just going to look like a jerk.