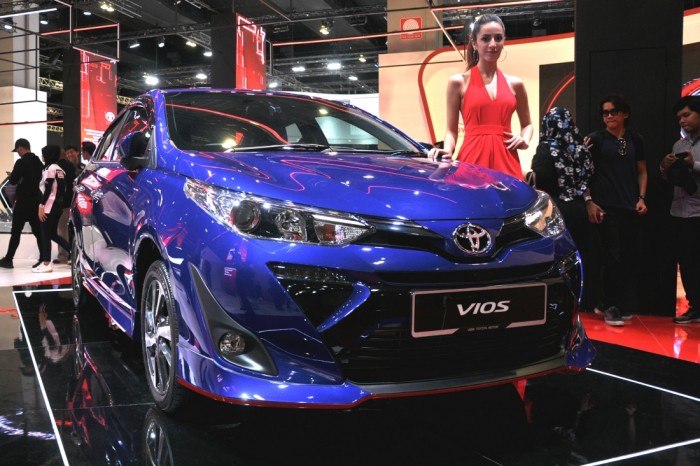 The all-new Toyota Vios is being previewed at the 2018 Kuala Lumpur International Motor Show (KLIMS’18) at the Malaysia International Trade &Exhibition Centre (MITEC). The popular B-segment sedan is now positioned as a more advanced and sportier car with more added value, compared to its first-generation debut as an entry-level compact sedan. Authorised Toyota dealerships are accepting bookings for this new Vios which has a Q1 2019 launch planned. 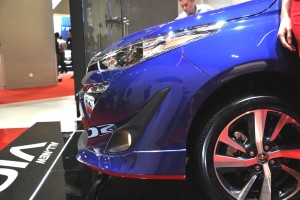 The all-new Vios takes on a curvier look in the front, with the outer edge of the lower bumper reflecting a catamaran look, while the sharp headlamps and radiator grille give it a sportier appearance. The silhouette continues to have a flowing roof line with dynamic curves flowing from the front to the sides of the car.

At the back, the character lines flow from the side of the car to the curvier combination tail lamps that visually emphasise width.

The primary target buyers are those in their 20s and 30s. “These customers expect a unique vehicle that they are proud to show-off to family and friends. That is why we aimed to create something with quality that can be seen at first sight. The design and comfort have been enhanced to a level our competitors cannot match,” as the All-New Vios Chief Engineer mentioned.

Buyers who want a sportier look can also add a new Aerokit specially developed for the Vios. The Aerokit consists of a front spoiler, rear spoiler, side skirts and bootlid spoiler.

The headlamps (projector halogen for the G variant) are supplemented by LED Daytime Running Lights (DRLs), while foglamps are available on the Vios 1.5G and 1.5E only. The two variants also get LED rear combination units.

A new feature for all variants is the “Follow-Me-Home” feature. This keeps the headlamps on for around 30 seconds after the engine has been switched off, for improved visibility in the dark.

As for wheels, the new Vios 1.5G has larger 16″ alloy wheels that have stepped spokes and machined details for a dynamic, cutting-edge look. A full-sized rim (16″) is also provided as the spare wheel.

Inside the car, the dashboard has been redesigned, with a chrome-plated frame wrapping the centre cluster which features a clear black panel on a flush surface. The steering wheel (leather-wrapped for Vios 1.5G) has switches for easier operation of various functions. 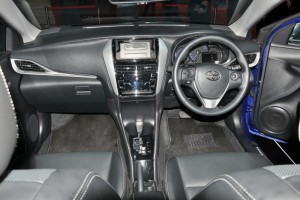 The Vios 1.5G will also get an Optitron meter and a 4.2″ TFT full-colour Multi Information Display (MID). This display shows the car’s operation as well as driving data. Specifically for Vios 1.5G, is a MID with a 3D start-up. For the other variants, the meters are continuously backlit for visibility at all times and the MID is a monochrome unit which shows running information.

Meanwhile, the infotainment system in the Vios 1.5G and 1.5E is a new DVD-AVX with a 6.8″ display panel. This new system developed for Toyota models can be linked to compatible smartphones using the USB mirroring feature. The driver will be able to use his/her favourite apps such as Spotify or Waze directly from the head unit. As with most other infotainment systems, Bluetooth connectivity also allows hands-free phone operation. This new DVD-AVX is able to support up to 5 phones for music streaming. The display panel also shows the image from the rear view camera.

Further, the Vios 1.5G and 1.5E also come with a Panoramic View Monitor (PVM) that gives the driver a bird’s eye view of the car. This makes it easier to spot obstacles on any side as well as to position the car more precisely in a bay or manoeuvring around tight spots. The images (including closer views of each side) are computer-generated using 4 tiny wide-angle cameras mounted on the car’s body.

For the base-level Vios 1.5J, the infotainment system is a 2-DIN unit which integrates neatly into the dashboard. Besides a CD-player and radio receiver, the system can also play MP3 files and has connectivity via an AUX port, USB and Bluetooth. The DVD-AVX system is also available as an option for the Vios 1.5J and can be specified at the time of purchase.

UMW Toyota Motor claims that changes have been made to the upholstery of the seats to provide better comfort. Headroom, hip room and shoulder room have also been increased at the rear as well. The Vios 1.5G gets perforated combination leather for a more premium feel. All variants get door armrests with soft touch surface (leather / fabric).

The Vios 1.5G and 1.5E variants continue to have 60:40 split folding backrests to extend storage space. Other conveniences include a new console box with 30% more volume and an armrest in between the front seats. The console box’s lid is finished with leather / fabric material and can serve as an extra armrest to the driver for more comfort. Additionally, there is a slot to hold a smartphone, as well as two USB ports at the rear of the console box for passengers’ convenience.

Unlike before, all variants now get fully automatic air-conditioning with a more integrated layout. When the air-conditioning system is set in fully automatic mode, the overall cabin temperature will be maintained at the chosen level by computerised control of the temperature, volume of airflow and also the distribution of air through the various inlet vents. A filter is installed in the ventilation system as standard to provide cleaner air blowing into the cabin.

To improve comfort and the premium feel, Toyota engineers have increased interior quietness by installing more sound insulation around the engine compartment. A sound insulator is mounted inside the engine cover while a 3-point engine mount system reduces vibration levels during idling. Insulation around the cabin now covers a wider area to keep out external noises and expansion foam is inserted in cavities to suppress vibration noise. Sponges are also used in the seals for more effective sealing. The existing Acoustic Windshield and Front Side Vibration Control Glass are now installed on the Vios 1.5E as well.

All Vios variants are fitted with a Smart Entry button on driver’s door handle for keyless locking and unlocking, as well as push-start button. 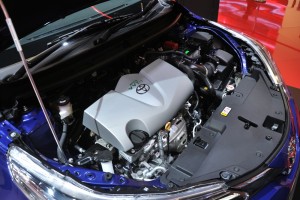 The Vios is fitted with the 2NR-FE 1.5L 4-cylinder 16-valve, DOHC engine with Dual VVT-i (Dual Variable Valve Timing with intelligence) that produces a maximum output of 107 PS at 6,000 rpm and 140 Nm of torque at 4,200 rpm. It is paired to a 7-speed Sport Sequential Shiftmatic CVT that is tuned to have a feel like conventional automatic transmission. Manual selection of gear is also possible by using the + or – positions located at gear shift; the Vios 1.5G gets paddle shifters.

Also found in all variants is the Drive Mode switch which offers a choice of NORMAL, ECO and POWER. Handling-wise, the all-new Vios has its suspension revised to provide a better driving and riding experience. The steering feel has been enhanced as well by improving the instrument panel reinforcement. The Vios 1.5G also benefits from the adoption of bigger disc brakes (front and rear) for improved braking performance. All variants come with disc brakes all around.

All variants also get no less than 7 SRS airbags. Pedestrian protection is also improved with areas such as the bonnet, front fender and cowl having impact-absorbing structures which can reduce the force of impacts experienced by a pedestrian’s head and legs. 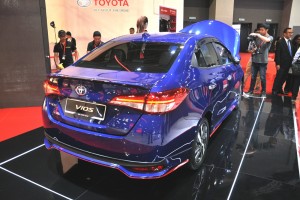 Safety sytems in the Vios include Hill-start Assist Control (HAC) which prevents the car vehicle from rolling back when moving off on a steep slope. Also newly added to the Vios 1.5G and 1.5E are the Blind Spot Monitor (BSM) and Rear Cross-Traffic Alert (RCTA). Fitted to the two higher variants is a new version of the Front Digital Video Recorder (DVR). The DVR has a G-sensor that will automatically ‘lock’ a recording when a severe impact had occurred so that it cannot be erased. It also has a Front Collision Warning system that detects a vehicle within the range of 15 metres ahead and gives visual and audible warnings. There is also a Lane Departure Warning which detects if the car is moving out of the lane (provided the road has visible lanes) and gives visual and audible warnings to alert the driver. Both features will only work when the vehicle speed is above 60km/h and above.

For drivers who want additional coverage, a Rear DVR is also available as an optional accessory. This activates automatically whenever the engine is started and the display is integrated with the Front DVR. For Vios 1.5J buyers, they can purchase the Front and Rear DVR separately at UMW Toyota authorized service centres after getting their cars. 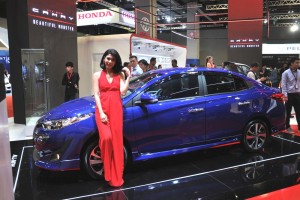 For all the accessories offered by UMW Toyota Motor, the installation is done professionally at the company’s own Accessory Centre in Integrated Quality Hub (IQH) located at Bukit Raja, Selangor.

The Vios is available in Super White II, Attitude Black, Silver Metallic, Dark Blue Mica Metallic and Red Mica Metallic (the latter two are new colours). The Vios will retail in the range of RM77k – RM87k. Warranty coverage is 5 years with unlimited mileage.