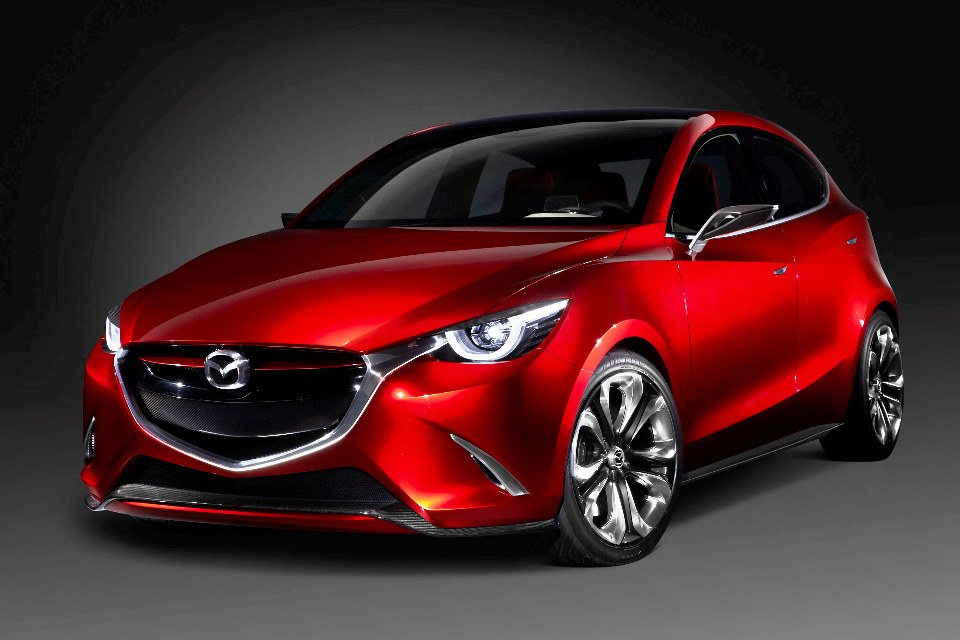 The next vehicle to come in the current generation of Mazda vehicles that started off with the CX-5 will be the all-new Mazda2, which is being previewed at the ongoing Geneva Motor Show as the Hazumi concept.

Sporting the latest interpretation of Mazda’s Kodo (Soul of Motion) styling language, the Hazumi concept’s name is derived from the Japanese word which translates to ‘bound’ or ‘spring up’. This is the smallest vehicle thus far to have received the Kodo styling language treatment, and Mazda’s designers have thus chosen an approach to give the vehicle the athletic image of a small but powerful animal ready to spring to action.

Like the current Mazda2 hatchback, the Hazumi concept has a wedge-shaped body that starts low up front and rises toward the rear, giving it an incredibly dynamic appearance, and which also had the unfortunate effect of giving the sedan derivative awkward proportions. For reasons of sanity and cost, we don’t expect the production models to wear 18-inch rims like the concept, but the Hazumi’s bodywork incorporates appropriately flared wheel arches to accommodate those enlarged rollers.

“Whereas with longer models such as the Shinari we use long and free lines of motion stretching from front to back to express Kodo, with Hazumi we’ve created a form which suggests explosive motion,” says Ryo Yanagisawa, Chief Designer of the Hazumi. This, Mazda says, is Kodo in its most highly concentrated form so far. 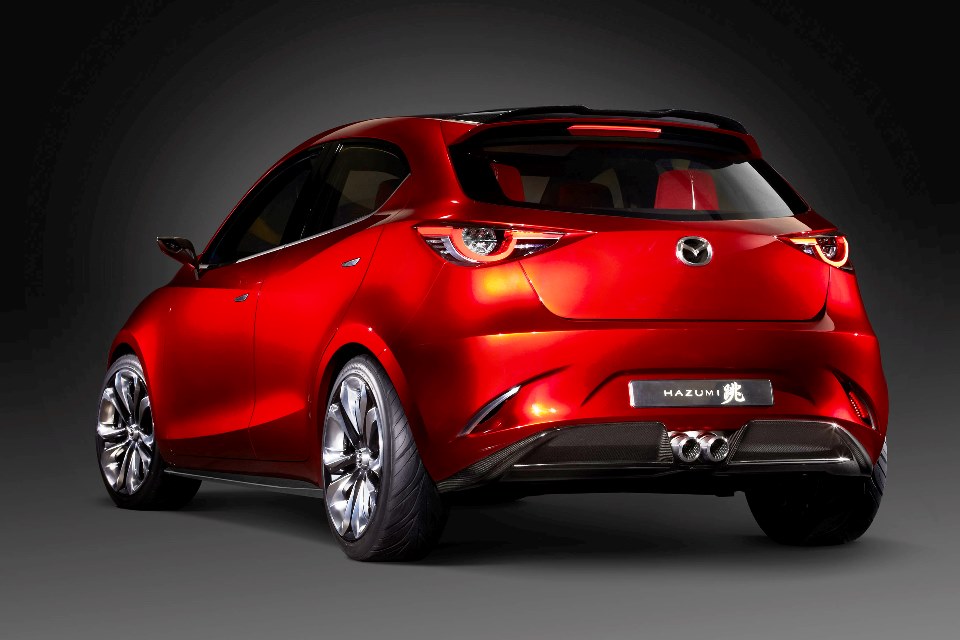 Nevertheless, in the context of a B-segment hatchback, the Hazumi is actually not small. It stretches the tape measure past four metres from stem to stern and the wheelbase is a generous 2,585mm. If these dimensions are carried to production, it would put the next Mazda2 as one of the bigger-sized members of the segment. The current model measures only 3,922mm long in hatchback guise and has a wheelbase of 2,490mm.

Whilst one can imagine most of the Hazumi’s exterior design cues to survive the transition to series production with the Mazda2, expectations may have to be toned down for the interior, although the basics still appear promising. The airplane-shaped instrument cluster from the all-new Mazda3 makes another appearance, and above it is a secondary display screen that is designed to allow drivers to quickly clean critical information without having to refocus to the main instrument panel. 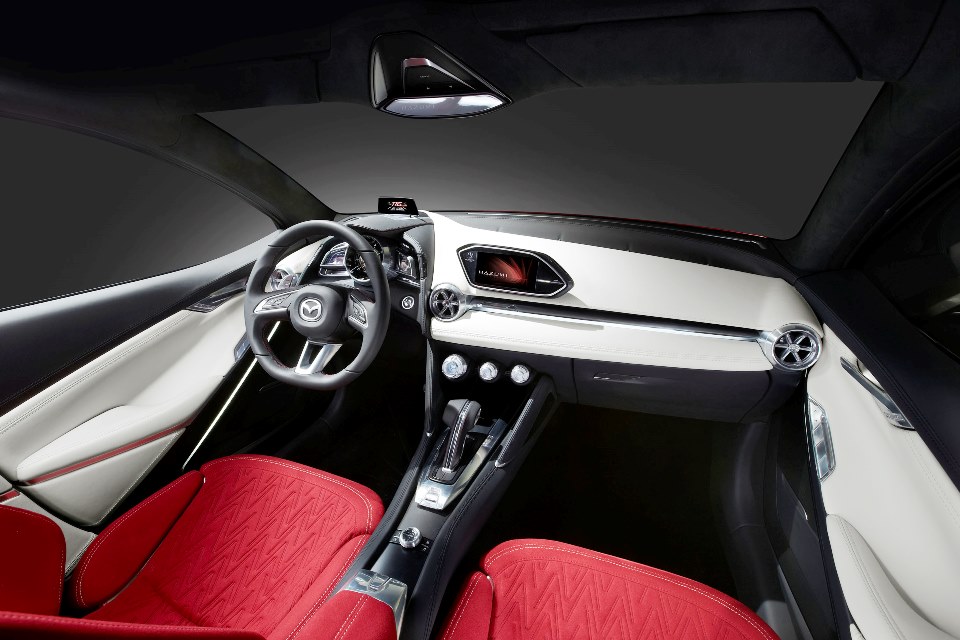 An iDrive-esque rotary control knob, presumably to operate the centrally-mounted display screen sits centrally along the minimalist centre console, and here’s hoping the production version does not neglect cup holders, or a handbrake for that matter. The similarly simplistic centre stack has room for only one circular air-con vent, three rotary control knobs (likely for climate control), and the aforementioned centre display screen mounted in stand-up fashion.

Debuting together, or rather debuting inside the Hazumi is a new 1.5-litre diesel engine that joins Mazda’s highly-acclaimed SkyActiv family of engines. It is the second diesel engine of the range after the 2.2 SkyActiv-D which we tested recently in a specially-arranged evaluation demo unit of the Mazda6. Performance figures of the new engine are not disclosed, but Mazda claims carbon dioxide emissions to be in the sub-90g/km range and full compliance to Euro 6 emission standards. 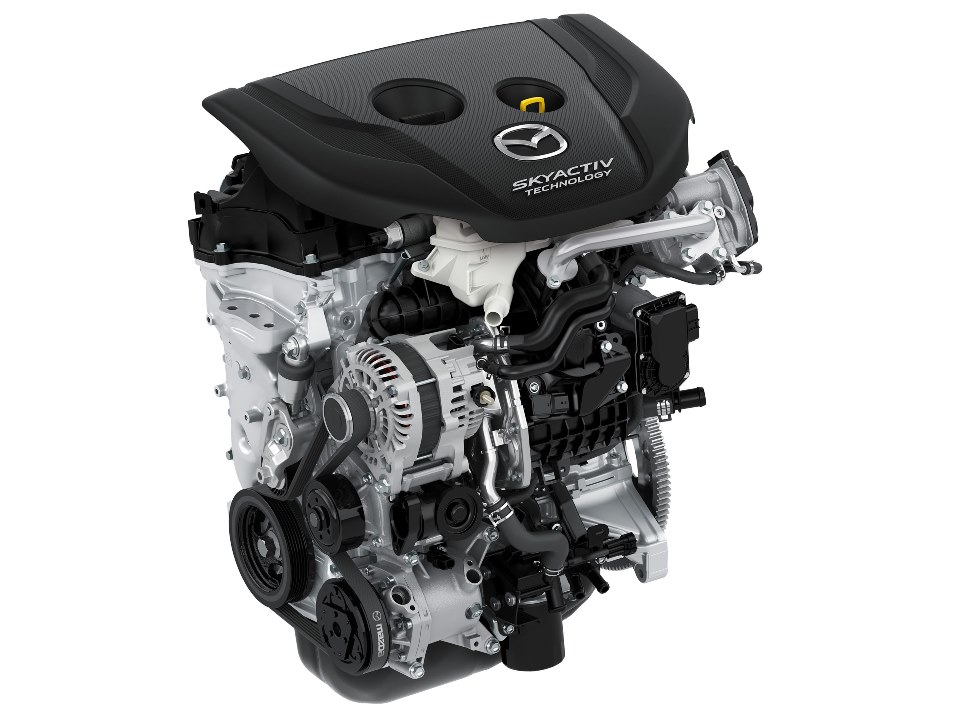