It has become a running joke among my friends and family that I test drive cars with amazing regularity. Especially since signing up for a part-time blogger here in AW test driving cars has been almost a weekly affair for me, even though I am not part of any media test drive events.

Somehow, I seem to get wind of almost every test drive event in the Klang Valley and sometimes beyond – even the more obscure ones. Usually, I would just pick up the newspaper, spot an advertisement of a test drive event somewhere, trot off to take a few cars out for a joy ride and then share the tales.

However, there were times (fortunately rare) when I drove all the way to the advertised location only to find nothing, or worse, a roadshow with no test drives despite being offered in the advert. In fact, I almost thought it was another one of those days when I drove from PJ all the way to Jusco Bukit Tinggi in Klang for the final of four legs of the Honda Mobile Roadshow.

When I arrived, I drove around the entire Jusco premises without being able to spot the Honda tent. Having answered false test drive ads before, it seemed likely that I might return home empty-handed. Nevertheless, I took a chance and entered Jusco’s paying parking lot, and eventually spotted the tent deep inside the lot.

The Honda Mobile Roadshow kicked off on 14-16 Nov at the Kajang Stadium before going to Rawang on 21-23 Nov, The Store Sg Buloh on 28-30 Nov and finally on 12-14 Dec here at Jusco Bkt Tinggi. It was a peculiar choice by Honda Malaysia (HM) to situate all of its roadshows along the perimeter areas of the Klang Valley, with not even one conducted in more central places like Subang Jaya, Petaling Jaya, Bangsar or Sri Hartamas.

I usually advocate arriving early for test drive events and to be among the first customers along the queue so that you can get the best out of the experience. However, this time around, I needn’t have bothered, as there were no customers there even at 12pm – usually the peak hour for such weekend roadshows. That’s fine with me, as I also needn’t have to wait for my turn to take the Honda Civic Hybrid and the Honda Accord for a spin. 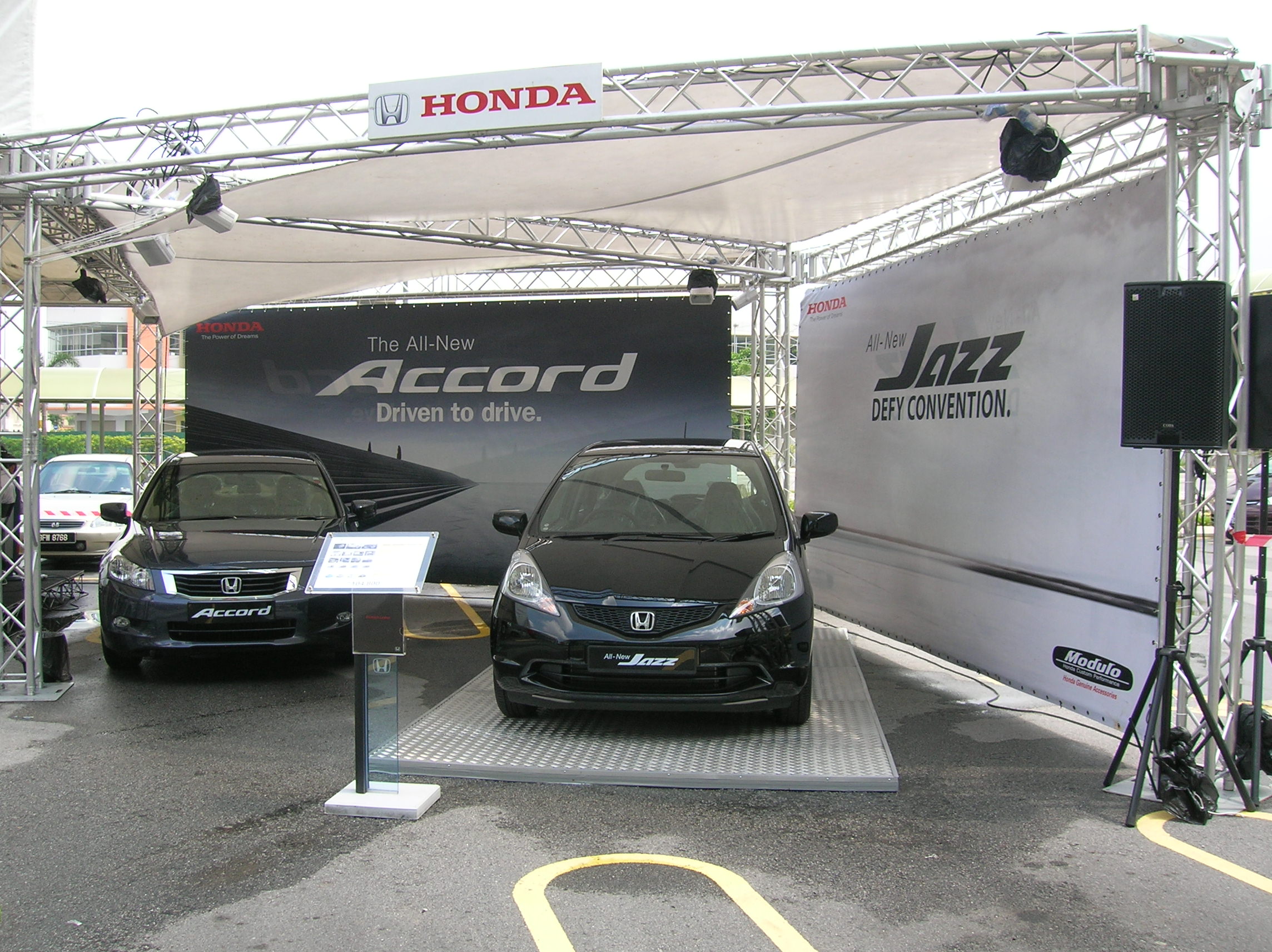 Accord and Jazz on display. For all its green credentials, at RM162k, the Civic Hybrid does not make a convincing case. Even if it returns the astonishing consumption figure of 4.6l/100km it promised, it’s going to be a while before your savings recoup the RM34k premium over the 2.0 i-VTEC model.

However, thanks to the new taxing structure favouring hybrid cars, the Civic Hybrid’s price will be brought down to the region of RM125 – RM130k (HM has yet to finalize the price), and that makes it an interesting prospect, as it’s now placed squarely in the line of sight of standard Civic buyers. Indeed, sitting in one, you’d be hard-pressed to tell the Civic Hybrid apart from the standard Civic. The interior is identical to the standard car, but that’s no issue, as far as I am concerned. It features the same two-tiered instrument cluster that houses the digital speedo in the upper tier and the tachometer with the gear lever indicator below. Upon deceleration, the IMA charges up its power unit by converting the car’s kinetic energy to electric potential energy – which, at the same time, doubles as engine braking. However, when you bury your right foot into the drive-by-wire throttle (like how I was doing for a while), the two motors team up to provide a combined output of 115hp and 167Nm.

That aside, it felt pretty much like driving a standard car, with only the little gauge at the instrument panel telling you whether the IMA is assisting the engine, or charging its batteries. The electric power steering was light to the turn, but not too light as I once experienced with a Honda City.

The brakes were most peculiar. The pedal’s travel felt to be no more than one and a half or two inches at most, but yet it was still relatively easy to modulate the vent disc / drum brake setup. At first, it felt more like a brake switch than a brake pedal, but then again, it was remarkably precise in responding to pedal modulation.

A pricetag of RM162k for this car is a dealbreaker, but, if as expected, when the Civic Hybrid is sold in the same price bracket as the 1.8 and 2.0 versions, then it becomes an alternative to consider. It looks and rides like your standard Civic, and if you don’t really need the extra performance of the higher capacity engines, I am sure you can do with the lower fuel consumption.

(+): The consumption, and how everything is directed at reducing it even more.
(-): Those set in the old ways of driving might not be able to accept this.

Verdict: You should consider this, if you have the budget at this range, but not needing the performance. 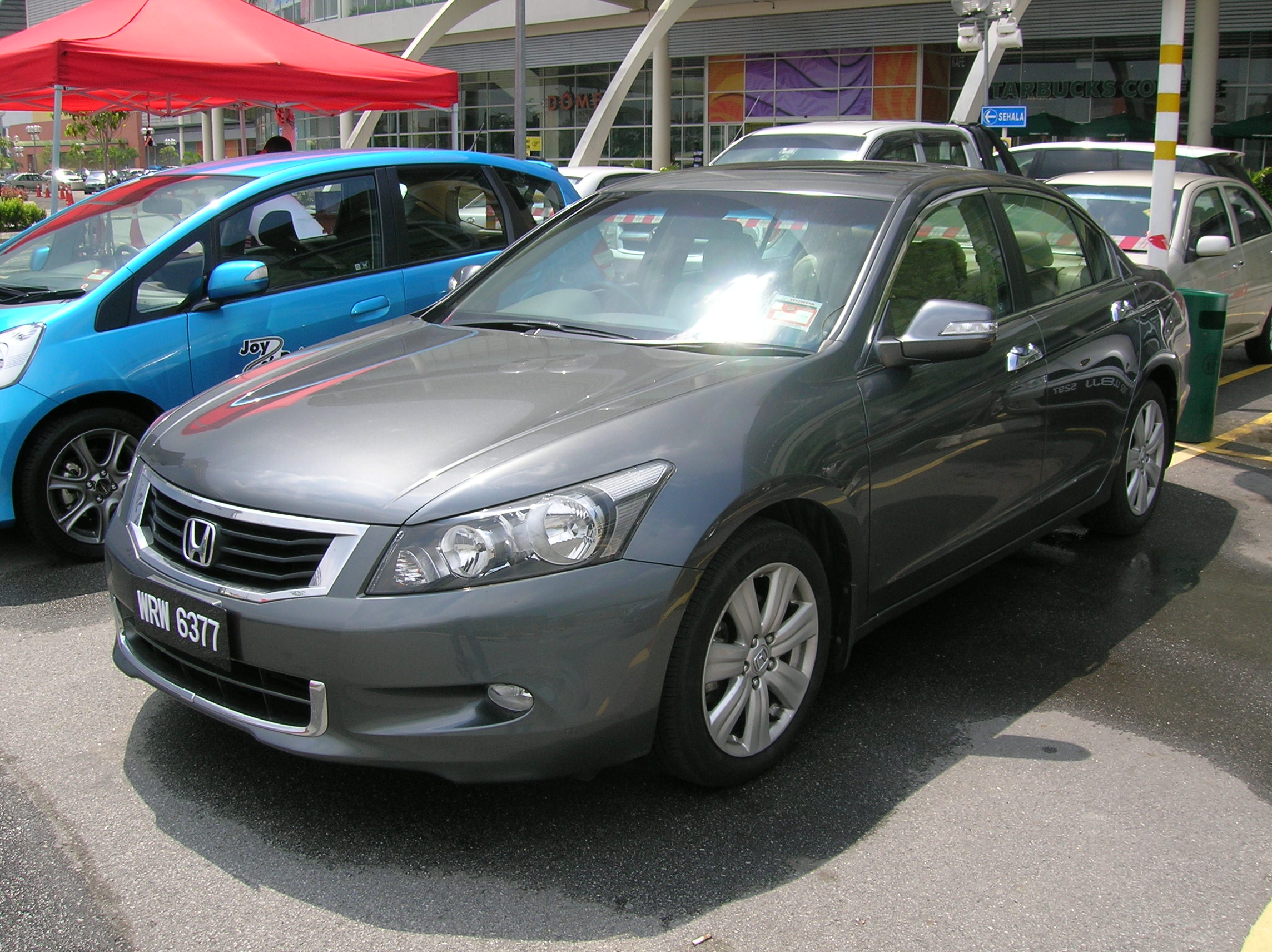 Coming out of the Civic Hybrid my next target was the Honda Accord. Recently, I was in motortrader.com.my forum debating with a bunch of forummers about the validity of a comparo written in Autocar ASEAN between this car and the Mazda6 – which saw the Accord score a surprising victory.

Being a big fan of the Mazda, I was also stunned by the result, which saw the Honda not only beating the 6 in terms of price, space, practicality, and interior (things the Honda are actually expected to win) but also the ride, handling and performance – areas which the 6 is supposed to trump all the ‘boring’ Accords and Camrys.

I have never driven any of the Accords before, but this one truly deserved my attention, and, to be honest, I made it a personal mission to test this one, and see how it compares to the Mazda6 2.5 I tested not too long ago. So, I did the natural thing, and asked for the keys to the Accord. 3.5-litre V6 engine comes with cylinder deactivation function, but with all cylinders firing, it’s good for 275hp and 339Nm

In addition, the engine comes with what Honda calls Variable Cylinder Management (VCM), which selectively de-activates certain cylinders when the car is traveling on a reduced load i.e. cruising. The technology is so refined that it works imperceptibly, with only the green ‘ECO’ light in the instrument cluster indicating that it’s working its magic.

The good news is that this little party piece (together with a few other things) is available standard for even the 2.0 and 2.4 models, more for the 2.4. This raises the question of whether if it’s worth spending an extra City’s worth of money for the 3.5 when the 2.4 is likely to do the job as well.

Your extra money are all going to an undoubtedly brilliant powerplant but little else. While 275hp and all the VCM trickery sounds wonderful on paper, they aren’t likely to make much of a difference in your daily down commutes. It gets worse when your friends driving the lower-end and very similar looking 2.0 and 2.4 start asking what’s the fuss about.

On the road, the powerful engine made light weight of the Accord’s massive bulk, but you’d expect it, given the price. Together with the VGR steering, it made the Accord feel lighter and more sprightly than its size suggest. Not knowing beforehand that the Accord has VGR can be quite disconcerting, as the steering was unbelievably light at low speeds.

The big question is now whether the top dog Accord is that good that Honda’s pricing it to encroach into German territory. While I believe it would leave the 2.0 for dead, I am not sure if the 2.4 can be that far behind that a customer would want to fork an extra RM78k for the 3.5. It doesn’t quite make sense. Look at those buttons… *pengsan*

(+): 3.5 V6 powerplant has bags of tricks. Variable gear steering as standard.
(-): Everything, except price, does not stand out against its weaker siblings.