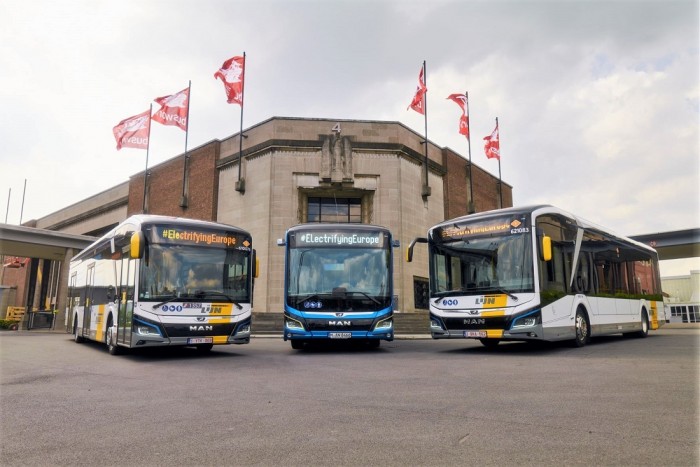 As part of the “Stars of the Year” event hosted by the German Association of the Automotive Industry (VDA) to mark the opening of IAA Transportation 2022 in Hanover, the “Bus of the Year 2023″ title was awarded to MAN Lion’s City 12 E.

In May, the all-electric MAN Lion’s City 12 E had made an impressive appearance at the “Bus Euro Test” in Limerick, Ireland, having been driven for about 2,500 kilometers from from Germany to the site. “It was a special experience for us as well as for the jury when we pulled up in Limerick with our MAN Lion’s City 12 E after 10 days of driving,” said Rudi Kuchta, Head of Business Unit Bus at MAN Truck & Bus. 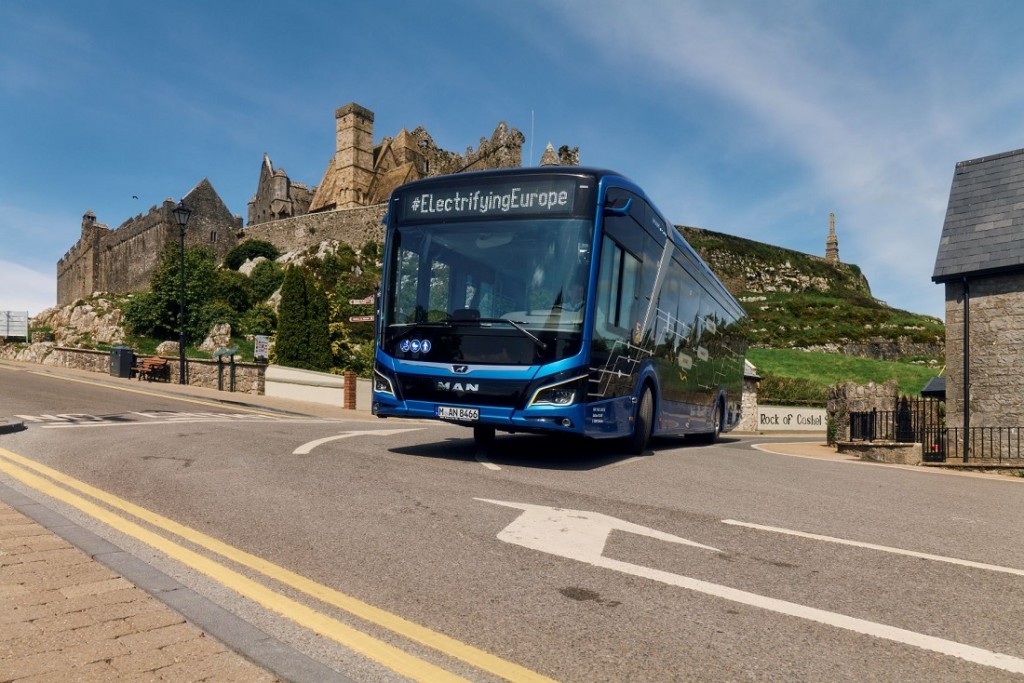 The “Bus Euro Test” panel of jurors had welcomed 5 bus manufacturers from all over Europe for comparison tests. After an intensive week of testing with numerous driver experiences and long technical discussions, the verdict was clearly in favor of the MAN Lion’s City 12 E as the new “Bus of the Year 2023″. The 23 European trade journalists were particularly impressed by the overall concept of the city bus, which scored points for its range, reliability, comfort and, above all, sustainability. This electric city bus entered series production in 2020 and is now on the road in many European countries.

“The new MAN Lion’s City 12 E has a ground-breaking design, high grade of comfort and a very quiet area inside. The drivers cabin is one of the best on the marked and with high grade of safety. MAN has focused on electric mobility from the first drawing and to a real product. In that way everything fits together and is not a ‘diesel bus converted to electric’. The International Bus & Coach of the Year Jury had a positive feeling from the first test drive and up to the decision that MAN Lion’s City 12 E is the Bus of the Year 2023″, said jury president Tom Terjesen, who presented the award to Kuchta.

The “Bus of the Year” award has been presented for 3 decades now. It is considered the most important international prize in the bus industry.

“We are all the more proud that our MAN Lion’s City E was so well received by the expert jury and that we are now receiving this prestigious award,” said Kuchta. “The award impressively demonstrates the outstanding work done by the entire MAN team. At the same time, it is an outstanding further chapter in the success story of our MAN Lion’s City E.”

However, the MAN Truck & Bus team continues working on the further development and improvement of the all-electric Lion’s City E. The aim is to continue making improvements through the use of technology and to provide public transport operators with the best possible support and solutions.

To enable operators to perfectly adapt their eBus to future use, MAN offers, among other things, 2 battery usage strategies for the Lion’s City E. In addition to the “Reliable Range” strategy (up to 270 km range), there is also the “Maximum Range” strategy for ranges up to 350 km. Further, the new CO2 air conditioning system and improved heating circuit ensure even greater efficiency. 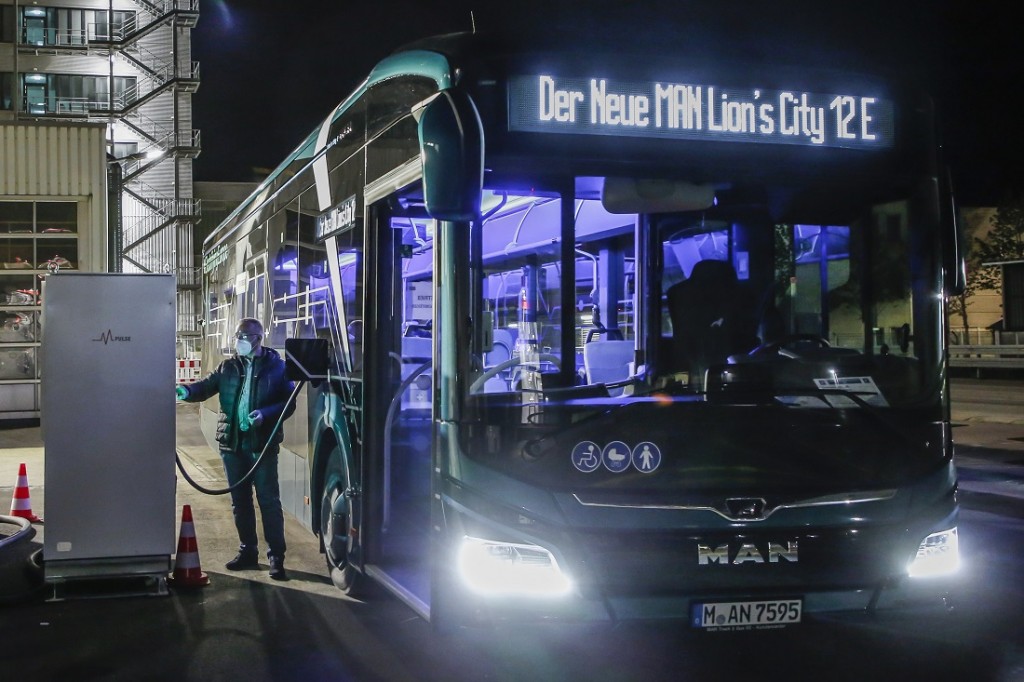 Also new are the modular batteries which allows electric bus customers to be able to specify the number of battery packs in the vehicle. This means that the all-electric city bus can be even better adapted to individual customer needs and requirements in terms of range and passenger capacity.

Additionally, MAN offers its customers a number of size alternatives. For example, the Lion’s City E is now also available as a short midibus version measuring 10.5 meters, which has one of the largest battery capacities in the segment. Thanks to its record-breaking turning circle and compact dimensions, it is the ideal solution for narrow city centers and busy pedestrian zones in particular. The midibus thus completes MAN’s electric bus range which now consists of 10.5-meter, 12.2-meter, and 18.1-meter vehicles.

“From the very beginning, it was clear to us that we would develop our eBus in close cooperation with our customers, but also that we would continuously optimize it. Our goal was and is to offer the best electric city bus. The fact that our efforts have been rewarded by the market and many experts is a great success,” said Barbaros Oktay, Head of Bus Engineering at MAN Truck & Bus. The electric city bus also received the iF Gold Award 2020, winning on ergonomics and aesthetics.

Beyond awards, it is the sales figures for the Lion’s City E tells of its popularity. More than 1,000 eBuses have already been ordered since the start of sales. “However, we want to put significantly more electric buses on the road: In the last fiscal year, just under 6% of our new city buses were electric; by 2025, that figure will be half. And we expect around 90% of our city buses to be battery-powered by 2030,” commented Kuchta. 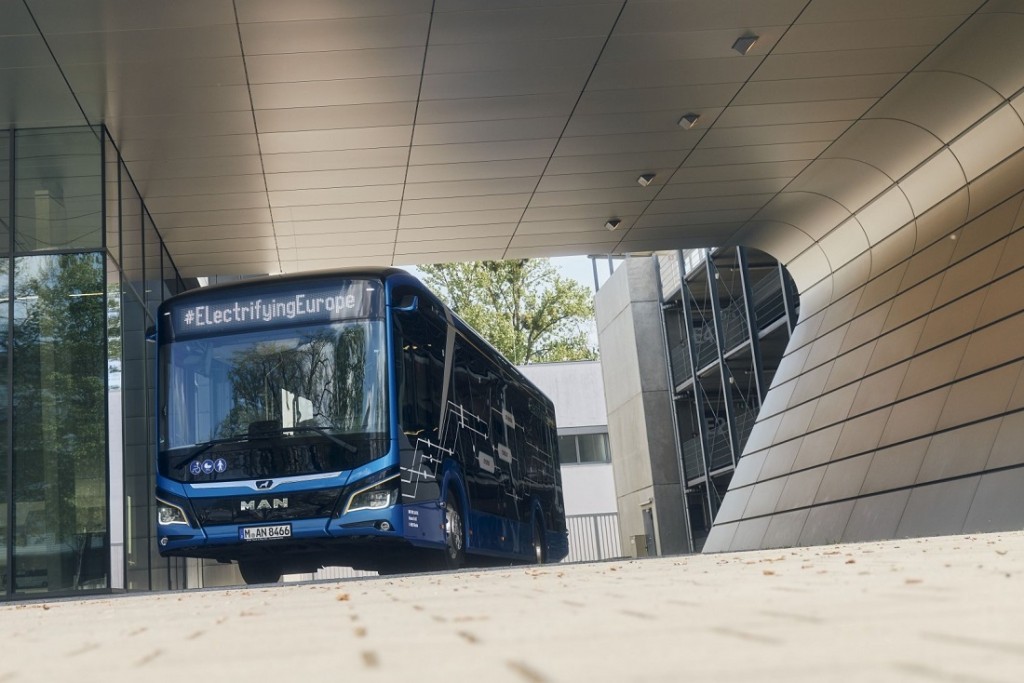 The Lion’s City E trip to Ireland was done during the “Electrifying Europe Tour”, traversing 8 countries in 10 days, from Munich to Limerick. The bus covered a total distance of 2,448.8 km and consumed a total of 1,763.7 kWh of energy, which corresponds to around 0.72 kWh per kilometer. These peak values were achieved thanks to the Lion’s City E’s efficient technology and an impressive recuperation rate of 20.8%. To make this trip possible, the eBus was fitted with 6 lithium-ion battery packs (480 kWh capacity) on its roof. Recharging was done after each daily stage and no intermediate charging was necessary as the bus had a range of up to 350 km. The Lion’s City E also meets the requirement to reduce pollutants and noise emissions in cities.

MAN is also offering the eBus chassis for international markets. According to Kuchta, “In order to meet the growing demand for electric buses worldwide and make an important contribution in terms of sustainable mobility, we are offering the MAN electric bus solution for international markets outside Europe with our eBus chassis”. In the future, the chassis will provide bodybuilders with a perfect basis for their all-electric models. MAN Malaysia Managing Director, Andrew O’Brooks had recently shared the company’s plan to introduce the electric bus chassis locally to support the drive for sustainable mobility in the public transport sector and to contribute to the country’s carbon neutral objective by 2050.