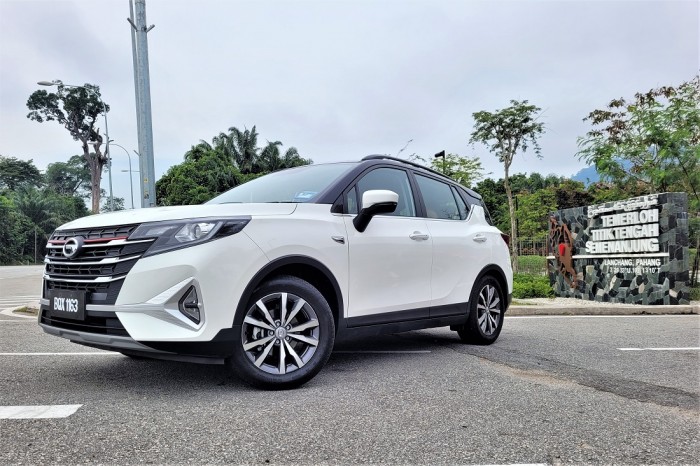 If you aren’t familiar with the GAC brand, you are likely not alone. In this part of the world, GAC can be considered a newcomer even though its establishment dates back to 1954. At the last count, the Guangzhou Automobile Group Co (GAC) is the 5th largest automobile manufacturer in China, the 4th largest plug-in EV manufacturer in China, and has joint ventures with a variety of foreign brands e.g. Toyota, Honda, Mitsubishi, Fiat and Jeep. The brands produced by the GAC Group include Trumpchi, Aion and Hycan.

And that is a brief background to the review vehicle, which is actually called the Trumpchi GS3 in China. For simplicity’s sake, it is branded as a GAC in sync with the stylized G logo. GAC in Malaysia is distributed by WTC Automotif which is a part of the Tan Chong Group. While the first batch of GS3s are imported CBU from China, subsequent batches will be locally assembled. This is also probably GAC’s long-term plan for growing its international presence as the Tan Chong Group has market presence and assembly facilities in several countries in the region.

The GAC GS3 is a compact SUV that is 4,358 mm long, 1,825 mm wide, and 1,660 mm tall (1,685 mm if you count the roof rails); its wheelbase is 2,560 mm. And while it has the wheelbase of a B-segment SUV, its width is comparable to a C-segment one; the widest in its class. This translates to more comfortable shoulder room for 3 rear passengers. And together with the generous headroom and legroom, these factors help elevate overall cabin comfort. Despite its generous space, the GS3 looks deceptively compact at a glance, until you park it next to some other B-segment SUV.

The Premium variant tested here (and likely what WTC Automotif expects to sell more of) has seats clothed in leatherette, with the driver’s seat featuring 6-way adjustability while the front passenger gets 4-way adjustment, both of which are manual. The cheaper Standard variant has the same type of seats but in a mix of fabric and leatherette. However, the Standard makes do without a centre armrest and centre headrest for the rear passenger; one of the few reasons why I think buyers will tend to gravitate towards the Premium one. This, and the omission of front side airbags, front fog lights, digital multi-info display, smart key and push button start would be the other reasons for me to pick the Premium. Both variants however, get cruise control and 8″ infotainment touchscreen display with Apple CarPlay (regretfully, I am an Android user).

On a long road trip, the GAC GS3 performed admirably. The cabin was comfortable for everyone as the GS3 rode steadily on the highways and trunk roads, its front MacPherson and rear torsion beam set-up, as well as the 17″ tyres handling the terrain competently. Additionally, the rear seats can be reclined slightly for a more relaxed posture. The GS3 uses electric power steering which may feel light and not as engaging to some but it makes light work of parking and I had no issues with it on the highway (I actually had the steering mainly in Sport setting). High speed stability was also not an issue though you can expect some wind noise intrusion somewhere around the highway speed limit. Incidentally, you can get set a speed alert in the vehicle settings menu which will annoy you any time you breach this limit. This is useful for those who don’t have the habit of collecting speeding tickets nor using cruise control.

And if I were to impose my preferences on others, I would say I don’t mind the analog speedometer and tachometer because it is easy to read. I would also only want an electronic parking brake instead of a mechanical handbrake if I needed the extra space in the centre console. But in the GS3, the cup holders next to the handbrake are large enough (it even has a removable separator) as is the cubby in front of the gear shift. Moreover, in today’s world, USB ports are practically a necessity and the GS3 has only 2, with one of them located in front for connecting to the infotainment unit. However, there is a 12V socket to expand device charging accessibility. Continuing on the positive, the GS3 also has a proper retractable tonneau cover for its 356-litre boot; something that isn’t necessarily offered in competing models.

What I found challenging with the GS3, as a driver, is the Drive Mode button to the left of the gear shift that let’s you switch between Normal, Manual and Eco modes. It’s not a very tactile button and takes a while to remember where it is. This shouldn’t be an issue if you’re an owner driving this long term, but I would prefer such a button to be somewhere on the dashboard and within my line of sight while driving. The other thing I had to learn with the GS3 is the oddly laid out buttons on the gear shift. My first instinct was to press the button on left side of the hammerhead knob to engage gear, but that is actually the +/- switch for manual shifts. The button I need to go from P to D is at the front of the hammerhead and not immediately obvious from the driver’s view. Again, this is something an owner would get used to.

Despite this, the driving part was a pleasant affair. The GS3 uses a 1.5L D-CVVT engine which provides 114 PS @ 6,000 rpm and 150 Nm @ 4,500 Nm to the front wheels via a 6-speed automatic gearbox from Aisin. This non-turbo powertrain doesn’t come with much drama, providing you with smooth delivery of power and gear shifts. You do have to plan ahead a little when overtaking especially on the trunk roads as there is a slight delay in downshifting. But this is where muscle memory and familiarity with the location of the Drive Mode button and manual switchgear are helpful for quick work. Though its official claim for fuel efficiency is 7 l/100km, I had managed 6.7 l/100km, travelling on a combination of highways, trunk and kampung roads in Normal mode for about 360 km. Eventually, I had settled for 7.7 l/100km when I included some long idling time as well as hard driving.

On its appearance, the GS3 also doesn’t try to be overly aggressive in styling, save for the front ‘Flying Dynamic Wing 3.0′ grille design which makes up most of its face. The rest of the vehicle is pretty clean in design, with the black ‘floating’ roof and minimal black cladding on the lower parts of the doors and bumpers helping to give the GS3 a more compressed profile. Where it falls short when compared to segment rivals is the use of (non-automatic) halogen projector headlamps instead of LED units. On the ‘bright’ side, halogens are more economical to replace and its warm coloured light generally has better penetration in bad weather. The GS3’s fog lights and tail lights are LED though. And there is also no rain-sensing wipers, if you’re into such features.

But GAC makes up for this with the safety features. No, there is no driving assistance suite, but you do get 6 airbags (including side airbags), Hydraulic Brake Assist (HBA), Hill Descent Control (HDC), and Blind Spot Detection (BSD), besides the usual ABS, EBD, Hill-start Hold Control, ESP, and reverse camera.

The GAC GS3 was launched in Malaysia with a retail price of RM96,800 (on-the-road price without insurance, for private registration) which included a reduction of 50% on Sales Tax due to the exemption which had since lapsed. This price tag puts the GS3 squarely in a very competitive price range where buyers have a varied choice of hatchbacks, sedans, SUVs and 7-seater MPVs.

There is not much drama with the GS3 to really create polarising opinions and perhaps because of that it may not achieve top-of-mind with car buyers. But there are buyers who don’t want too much flair or overly sophisticated electronics which they’ll never use. They just want something that is solid, stable and sturdy. And the GAC GS3 gave me that feeling. For peace-of-mind, WTCA is giving a 5-year (or 150,000 km) warranty on the vehicle.