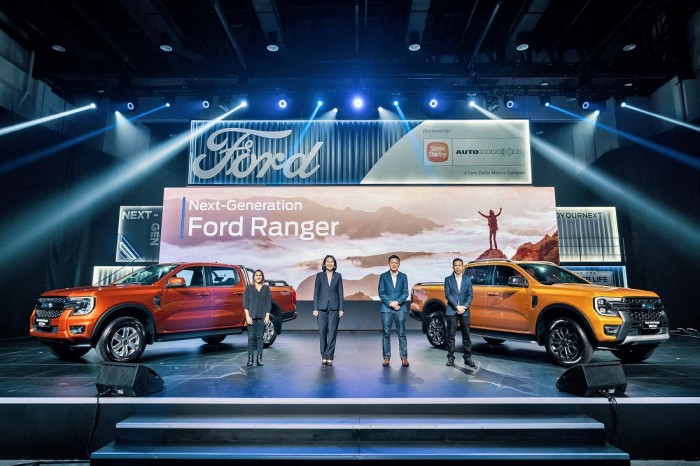 Ford Motor Company and its local distribution partner, Sime Darby Auto Connexion (SDAC), have launched the next-generation Ford Ranger which comes with improved ride and handling and adds more tech. The Ranger line-up consists of the XL, XLT, XLT Plus and WildTrak. For the enthusiasts, the range-topping Raptor will officially arrive in Q4 2022.

The new Ranger gets an even bolder appearance than before, keeping in line with Ford’s truck design language. Its face features a new grille and new signature C-clamp headlight treatment. Meanwhile, the subtle shoulder line along the sides incorporates bolder wheel-arches to give the Ranger a surefooted stance. Furthermore, this will be the first time the Ranger offers matrix LED headlights (on the WildTrak variant) with auto high beam (standard on the XLT Plus). At the rear, the taillight design syncs with the signature graphics at the front.

The design of the new Ranger at the front allows for improved airflow so that the cooling is optimised, particularly when towing and carrying heavy loads. This is courtesy of a hydro-formed front-end structure that also helps future-proof the Ranger for other propulsion technologies. Currently, the Ranger comes with a 2.0L Bi-Turbo (XLT Plus and WildTrak) and a 2.0L Turbo diesel engine for the rest. The Bi-Turbo engine puts out 210 PS @ 3,750 rpm and 500 Nm @ 1,750 – 2,000 rpm, and is paired with a 10-speed automatic with SelectShift. Meanwhile, the single turbo engine produces 170 PS @ 3,500 rpm and 405 Nm @ 1,750 – 2,500 rpm. The transmission choices for the latter engine are either a 6-speed automatic with SelectShift or a 6-speed manual.

The next-generation Ranger’s track and wheelbase see a 50 mm increase for better stability on and off-road. It has also improved the front approach angle to 30 degrees (up from 28.5 degrees), and rear departure angle to 23 degrees (up from 21 degrees). Engineers also increased the turning range and shifted the rear suspension dampers outboard of the frame rails to give drivers and passengers a more controlled ride whether the vehicle is laden or not. 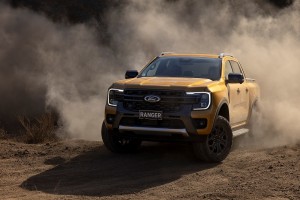 Traditionally, only the Ranger Raptor offers selectable drive modes. This has now expanded to the other variants, with up to six different modes depending on variant i.e. Normal, Eco, Tow / Haul, Slippery for on-road, Mud / Ruts and Sand for off-road. The Ranger WildTrak gets all these modes while the variants from the base XL to the XLT Plus come standard with 4 drive modes sans the off-road ones. These modes adjust everything from the gearshift to throttle response, traction and stability controls, ABS and more. Further, off-road recovery is made easier with the dual recovery hooks in the front bumper.

Ford also saw an opportunity to make major improvements to the Ranger’s usability, after observing how customers climbed up to the load box. With that, it designed an integrated side-step behind the rear tyres (WildTrak) for more convenient access to the box. In addition, the Ranger team worked to ensure that a wider variety of cargo could fit and stay secure in the load box. By widening the truck by 50 mm, customers can now load large flat items, such as plywood sheets or a full-size pallet.

Additional convenient touches include a new, tough plastic-moulded bedliner (XLT Plus and WildTrak) that helps protect both the truck bed from scratches as well as the owner’s knees from kneeling on a steel truck bed. There are also extra cargo tie-down points on strong steel tube rails to provide convenient points to secure loads. Durable, flexible load box caps around the sides of the box and across the tailgate also help conceal structural attachment points for canopies and other aftermarket accessories.

The next-generation Ranger also offers a new cargo management system designed with dividers to hold various sized items such as lumber or toolboxes. Owners can also create smaller compartments to store objects, which would otherwise have to go in the cab, using a system of ultra-strong spring-loaded cleats that clip into rails bolted to each side of the cargo box. The tailgate can also double as a mobile workbench with an integrated ruler and clamp pockets to measure, grip and cut building materials.

Inside, the car-like cabin of the next-generation Ranger offers a more modern and functional design. The new Ranger has a high level of technology integration, functional storage, premium soft-touch materials and visual cues to enhance cabin ambience. The heart of the Ranger’s connective experience is the first-in-class 10.1″ or 12″ touchscreen (depending on variant) in the centre stack. It complements the fully digital instrument panel and is loaded with Ford’s latest voice-activated SYNC®4A communications, entertainment and information system.

Many of the traditional driving mode controls have been moved from the dash and centre console to their own dedicated display on the SYNC screen. With the press of a button, drivers can go to Ranger’s dedicated screen for all off-road and drive modes where you can monitor the driveline, steering angle, vehicle pitch and roll angles and other controls. In the WildTrak, the screen is also linked to a 360-degree camera, making parking a breeze in tight spaces. It can also be used to assist in negotiating tricky off-road terrain.

The design team also created clever storage and useful features for owners including places to store a phone or charge it wirelessly (XLT Plus and WildTrak) as well as a large centre console bin. The door pockets have  also been designed to carry more, while the wide dash conceals an upper glovebox. There are also storage bins under and behind the rear seats.

For safety, the next-generation Ranger offers more of the latest in crash protection features and advanced driver assistance technologies. The WildTrak gets the segment-first Evasive Steer Assist feature. This system helps drivers avoid potential forward collisions by helping to steer with less effort when a collision cannot be avoided by braking alone.

The WildTrak and XLT Plus also come with a new Post-Collison Braking system which applies the brakes after a collision, to reduce the risk of secondary collisions. Also new to the Ford Ranger is Adaptive Cruise Control with Stop-and-Go feature, Cross Traffic Alert and Reverse Brake Assist on the WildTrak. As part of the smart technology safety suite on next-generation Ford Ranger, the Automated Emergency Braking (AEB) system on the XLT Plus and WildTrak has been enhanced with cyclist and pedestrian detection in addition to providing AEB support at an intersection in some instances.

“The Ranger has always been a trusted partner to small business owners, families, adventurers, commercial fleets and so many morein more than 180 markets around the world. With the new advanced features offering even greater capability and versatility, we believe that the next-generation Ranger will continue to revolutionise the pickup segment and build on its widening appeal in the market,” said Yukontorn ‘Vickie’ Wisadkosin, President, ASEAN and Asia Pacific Distributor Markets, Ford Motor Company. 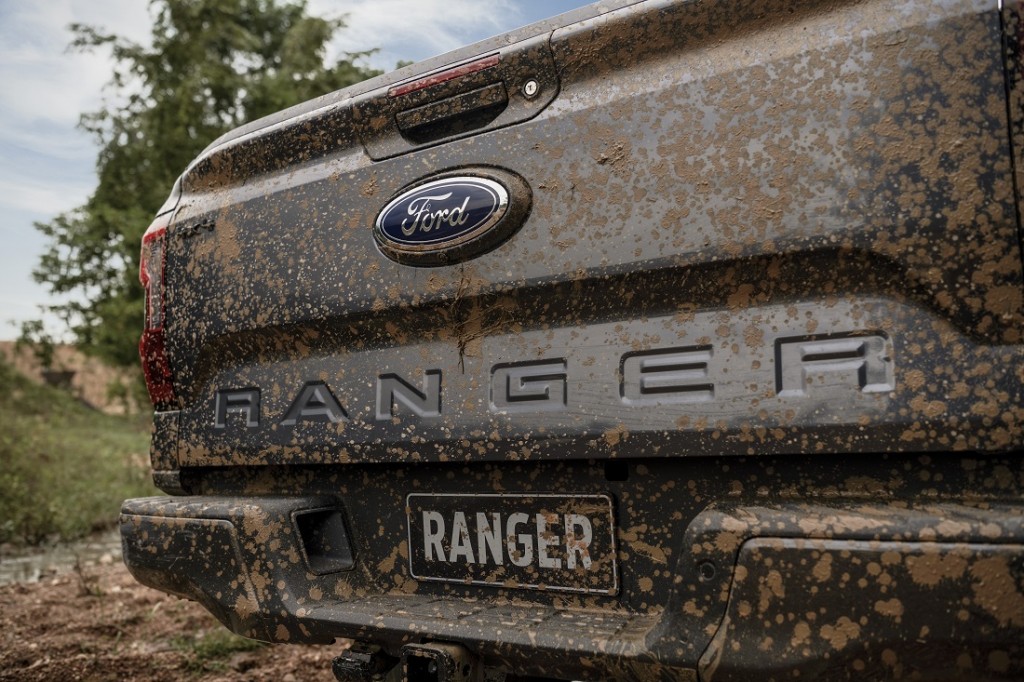 The next-generation Ranger is available in 2 new stunning colours i.e. Sedona Orange and Luxe Yellow on the WildTrak, in addition to the existing colours of Arctic White, Meteor Gray, Aluminium Metallic, Lightning Blue and Absolute Black (depending on variant). The retail prices are (on the road without insurance): 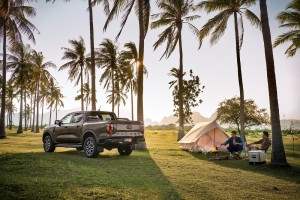 “The trend towards pickups for more than just work has been growing in Malaysia. This is especially true for the upwardly mobile and affluent who used to prefer SUVs but are now gravitating to the Ranger, particularly WildTrak, for its work capabilities, latest technologies, and premium sedan interior. We are confident the next-generation Ranger will fulfil the needs and wants of an even broader range of customers as an all-rounder vehicle for work, family and play,” said Turse Zuhair, Managing Director, Sime Darby Auto ConneXion.

In conjunction with the launch of the next-generation Ford Ranger, SDAC is also introducing several new aftersales and service enhancements to provide better the ownership experience. For a start, next-generation Ranger owners can opt for an extended service package, through which you can make upfront payments for scheduled services for up to 5 years. A key benefit is cost savings as you can lock-in the current price amidst rising costs and build the payments into your loan.

Additionally, besides the standard 5-year warranty, you can also choose an extended warranty of up to 7 years for better peace of mind.

Furthermore, as a Ranger owner, you will become part of the Ford Inner Circle in Malaysia. This is a community of like-minded individuals who enjoy pushing boundaries and exploring new horizons, contributing back to society and going for excursions such as the Ford Ranger Getaways, with friends and family.

Created exclusively for the Malaysian market, next-generation Ranger customers will receive a privilege key code which offers exclusive discounts to get you started on your Ford Ranger Getaways adventures, in addition to invitations to exclusive events. You will also gain access to scheduled familiarisation sessions at a Ford showroom that not only allows you to build relationships with your preferred dealer, but also provides you with in-depth understanding of the features and full potential of your Ranger.