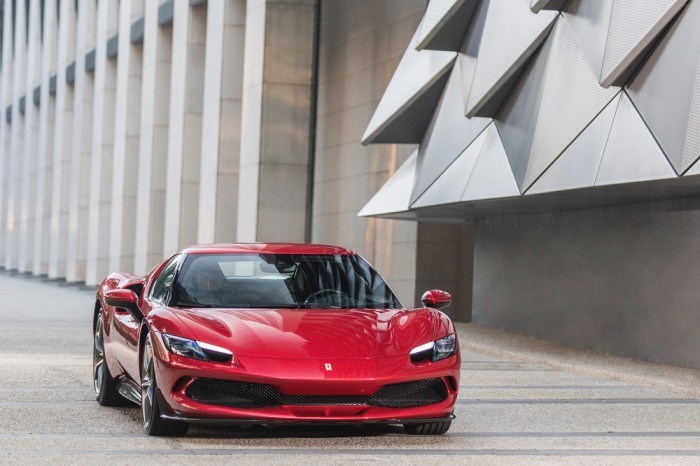 The Ferrari 296 GTB has been launched in Malaysia. Introduced by Naza Italia, the official importer and distributor of the Ferrari brand in Malaysia, the 296 GTB is the Italian marque’s latest mid-rear-engined 2-seater berlinetta (a.k.a. sports coupe). Maranello claims that the 296 GTB guarantees a thrilling experience, not just when pushing the car to its limits, but also in day-to-day driving. 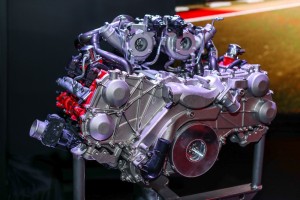 The Ferrari 296 GTB brings with it a significance for Ferrari as it introduces a revolutionary engine type to flank its multi-award-winning 8- and 12-cylinder power units i.e. a new 663 cv 120° V6 coupled with an electric motor capable of delivering a further 122 kW (167 cv). This is the first Ferrari road car to have a V6 engine with a V angle of 120° and coupled with an electric motor. As a result, it can unleash a massive 830 cv total power output to deliver previously unthinkable performance levels. The “cv” term represents “cavallo vapore” which literally translates to ‘horse steam/power’. 663 cv equates to approximately 654 mechanical hp, while 830 cv is about 819 hp.

This engine also ushers in a new V6 era that has its roots deep in Ferrari’s storied 70-year-plus experience in motorsports. The first Ferrari V6 featured a 65° architecture and debuted on the 1957 1,500 cc Dino 156 F2 single seater. This was followed by bigger displacement versions in 1958 on the front-engined sport prototypes i.e. 196 S and 296 S, and F1 cars, such as the 246 F1 which powered Mike Hawthorn to the F1 Drivers’ Championship title the same year.

The very first Ferrari to sport a mid-rear-mounted V6 was the 246 SP in 1961, which won the Targa Florio both that same year and in 1962, amongst many others. Also in 1961, Ferrari secured its first Constructors’ title in the Formula 1 World Championship with the 156 F1, which was powered by a 120° V6. Ferrari first installed turbos between an engine’s cylinder banks on the 126 CK in 1981 and subsequently on the 126 C2 in 1982, which became the first turbocharged car to win the Formula 1 Constructors’ World Championship title. This was followed up with a second title in 1983 with the 126 C3. Since 2014, V6 turbo hybrid architecture has been used on all Formula 1 single-seaters. 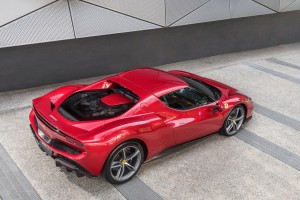 As per its naming convention, the car’s name is a combination of its total displacement (2,992 cc) and number of cylinders. The GTB acronym stands for Gran Turismo Berlinetta. The Ferrari 296 GTB’s plug-in hybrid (PHEV) system guarantees an incredibly usable car. The electric motor (MGU-K or Motor Generator Unit, Kinetic) cuts pedal response time to zero and delivers a 25 km range in all-electric eDrive mode.

The car’s compact dimensions and the introduction of innovative dynamic control systems as well as meticulously honed aero ensure that the driver will instantly experience its astonishing agility and responsiveness to commands. Its sporty, sinuous design and extremely compact dimensions also visually underscore its exceptional modernity, brilliantly referencing the likes of the 1963 250 LM, the perfect marriage of simplicity and functionality.

As was the case with the SF90 Stradale, for clients who want to exploit the car’s extreme power and performance to the utmost, particularly on the track, the 296 GTB is also available with the Assetto Fiorano package, which includes lightweight features and aero modifications. This special package provides significant weight reduction and aero content. Most notably, it includes special GT racing-derived adjustable Multimatic shock absorbers optimised for track use, high-downforce carbon-fibre appendages on the front bumper that can deliver an additional 10 kg of downforce, a Lexan rear screen, and more extensive use of lightweight materials such as carbon-fibre for both cabin and exterior.

The Assetto Fiorano package involves much more than simply replacing elements. Some components required that the standard basic structure be redesigned, including the door panel, resulting in an overall weight-saving of 12-plus kg. Lastly, a special livery inspired by the 250 Le Mans can also be ordered exclusively by owners who opt for the Assetto Fiorano package. Its design runs from the front wings and hugs the central grille and delineates its edges. This styling element continues along the bonnet, creating a hammer motif before running lengthways up to the roof and then down onto the rear spoiler. Other content available to order solely with the Assetto Fiorano package includes an ultralight Lexan rear screen that brings the overall weight reduction to 15 kg, and Michelin Sport Cup2R high performance tyres which are especially suited to track use because of their grip. 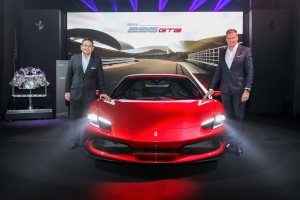 “The Ferrari 296 GTB is a defining part of Ferrari’s new era of electric technology and takes the marque to thrilling new heights as its first rear-wheel drive hybrid mid-engined V6. Its technology combined with immense power and striking design, make the 296 GTB a definite showstopper and we are delighted to introduce this model to the Malaysian market,” said Dato’ Nik Hamdam Nik Hassan, Group CEO, Automotive Group, Naza Corporation Holdings Sdn Bhd.

The Ferrari 296 GTB is covered by the extended 7-year maintenance programme which covers all regular maintenance for the first 7 years of the car’s life. This scheduled maintenance programme for Ferraris is an exclusive service that allows clients the certainty that their car is being kept at peak performance and safety over the years. This very special service is also available to owners of pre-owned Ferraris.

Regular maintenance (at intervals of either 20,000 km or once a year with no mileage restrictions), original spares and meticulous checks by staff trained directly at the Ferrari Training Centre in Maranello using the most modern diagnostic tools are just some of the advantages of the Genuine Maintenance Programme. The service is available on all markets worldwide and from all Dealerships in the Official Dealership Network.

The Genuine Maintenance programme further extends the wide range of aftersales services offered by Ferrari to meet the needs of clients wishing to preserve the performance and excellence that are the signatures of all cars built in Maranello.

The Ferrari 296 GTB is available from the base price of RM1,228,000 (before duties, customisation options, taxes and insurance). For further details, contact the Ferrari Malaysia Showroom.