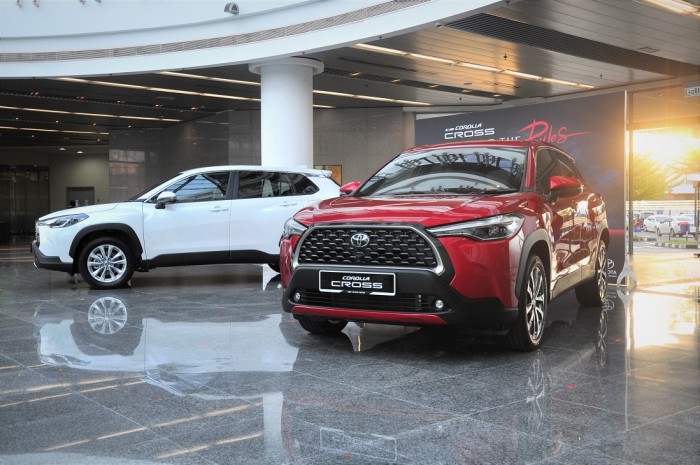 The Toyota Corolla Cross made its global debut in July 2020, and here we are less than a year later with the official launch in Malaysia. UMW Toyota Motor organised a test drive recently to let us build our first impressions of its latest crossover. The drive covered some highway, urban roads as well as not-so-urban roads to give us an idea of what the Corolla Cross is like. 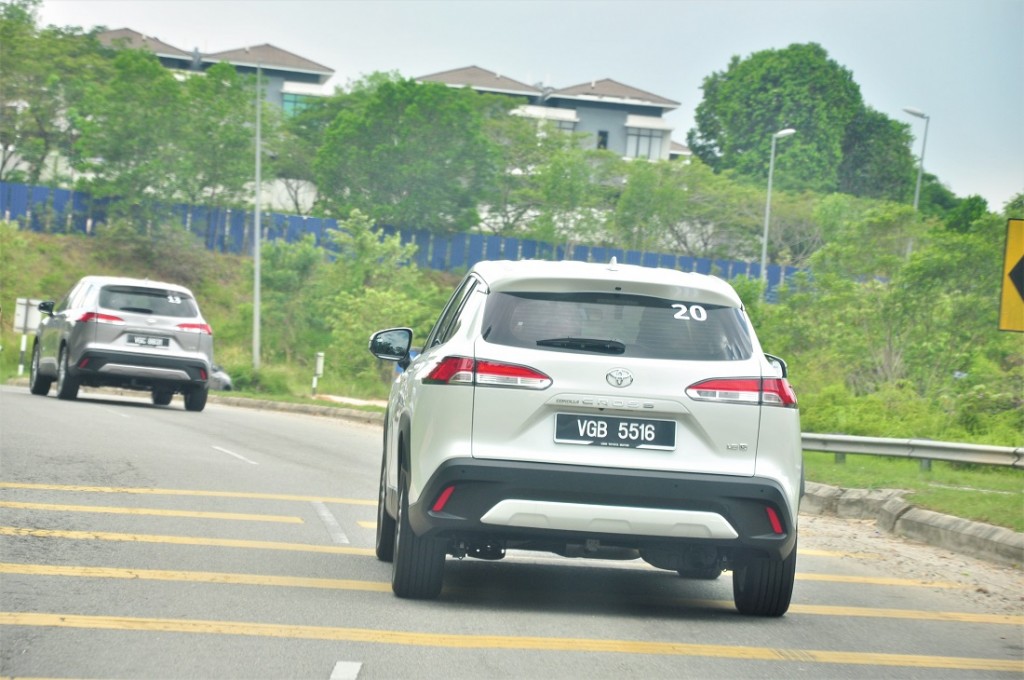 Only the Corolla Cross 1.8G was made available for the drive. This is the base spec that is mechanically similar to the higher 1.8V, but does without certain equipment (which we will mention later) and the Toyota Safety Sense suite. You can read the details from the launch here: http://autoworld.com.my/news/2021/03/25/toyota-corolla-cross-launched-in-malaysia-two-variants-available-from-rm124000/

We start off with the most apparent item on the list – what the exterior looks like. Normally I would gloss this aspect over as looks are subjective and based on individual preferences. Of course, there are car designs so extreme that they make the majority of us fall in love. Or want to poke our eyes out multiple times.

But one of the first impressions given by the Corolla Cross is how little resemblance it bears to the Corolla Altis sedan. On the positive side, this gives some variety and differentiation to the Corolla range.

While the Altis has an edgier design and more chrome trim, the Cross is more subdued and has more plastic cladding slapped on. The vertical crease on the outer edges of the front bumper could be the closest similarity between two, though in the Corolla Cross, it is not home to fog lamps (which are housed below the grille) like the Altis.

Nonetheless, there are defining character lines on the front and rear fenders to keep the Corolla Cross from looking too plain. Though these become less obvious in the darker body colours. But overall, the Corolla Cross has an understated appearance that is not polarising and should age well. It will be appreciated by those who don’t like flashy vehicles. 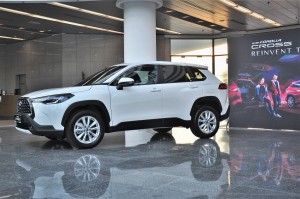 I did mention that we drove the base spec 1.8G and in 2021, the halogen headlights AND daytime running lights really stand out in a sea of LED. For the LED lovers, the front and rear fog lamps have them. As do the tail lights which are LED combination sets. If you need LEDs for everything, then the range-topping 1.8V will provide it all, including LED light curtain effect in the front and rear.

Another difference between our two variants is the 1.8G doesn’t get the acoustic windshield of the 1.8V. The 1.8G also uses 17″ alloy wheels instead of 18″, which should make replacing tyres easier on the pocket. That aside, both variants have powered access to the 440-litre cargo space, complete with kick sensor for hands-free operation.

The dashboard area is where you see some Corolla Altis. The centre console, steering wheel, gearshift, and air-con vents and trim are shared elements. The arm rests on the door cards and front seats are also similar. However, fans of the 6.8″ multimedia touchscreen unit in the Corolla Altis will be disappointed to learn that the Corolla Cross uses a larger 9″ touchscreen instead. It also comes with Apple CarPlay and Android Auto-ready wired connectivity. The screen also shows a 3D panoramic view of the vehicle’s surroundings to aid manouevring in narrow spaces. The image isn’t 2k standard, but is clear enough.

The leather seats are fairly comfortable and offer enough support for the front occupants. Taller passengers in the rear may appreciate more thigh support but this is compensated by a reclining backrest, even if only for 6 degrees. The rear passengers get to enjoy dedicated cooling vents and a pair of 2.1A USB ports for charging devices. The front, however, only get to enjoy a single USB port attached to the head unit. There is also a 12V socket inside the centre armrest storage to add more charging; you can also add in the wireless charging pad option when you purchase the vehicle if you need it. Anyway, if you do not frequently have more than two power-hungry occupants in the vehicle, the default ports will be sufficient. 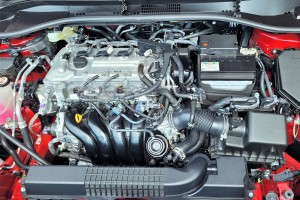 The Toyota Corolla Cross is fitted with the 1.8L 2ZR-FE engine paired with a 7-speed CVT with Sequential Shiftmatic that channels 139 PS and 172 Nm of torque to the front wheels. Acceleration isn’t mind-blowing but this doesn’t pretend to be a sporty crossover. It is far from lethargic and the CVT shifts are smooth and get you up to speed fairly well. But once you are in the high rev range, the engine sounds a little harsh. Some added insulation could hide this but that will show up in the final price tag.

Experts in online search engines will be able to find the slight difference in engine output of the Thailand version i.e. 140 PS and 177 Nm. But bear in mind that the Thai version is slightly different to suit that market. The non-hybrid variant for example, uses the 1.8L 2ZR-FBE flex fuel engine that can combust E85 gasohol. Not exactly something we need here.

We also don’t get the hybrid version, yet. But whether we do or not will depend on various factors such as government incentives and market acceptance. FYI, the Corolla Cross Hybrid uses a 1.8L 2ZR-FXE engine with a Synchronous Motor with Permanent Magnet to offer a combined output of 122 PS. 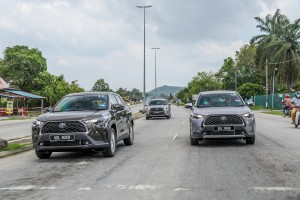 But, back to the driving. The TNGA-C platform of the Corolla Cross is shared with the Altis and C-HR and provides a rigid base for handling stability and ride comfort. But instead of a double wishbone suspension set-up at the rear like the mentioned models, the Corolla Cross gets a torsion beam with stabiliser. There is no deficiency in handling with this set-up, at least not for a family-style SUV. It was driven on a twisty stretch in Hulu Langat and there wasn’t much drama to it in terms of body roll or control. On the upside, the torsion beam allows for more space in the boot, and simplifies the suspension system which helps to keep the retail price lower.

Toyota claims that the A-pillar of the Cross has been narrowed to give better driving visibility, but this is in relation to the Altis. It is still substantial but the higher seat position and front quarter glass still offers good visibility out. It also has the best turning radius of 5.2 m compared to its nearest rivals in price and size.

The Corolla Cross 1.8G however doesn’t get Toyota Safety Sense, but is still fitted with cruise control, Blind Spot Monitor and Rear Cross Traffic Alert, as well as the standard VSC, TRC, HAC, ABS, EBD, etc. Additionally, the use of a foot operated parking brake evokes some nostalgia of the old days, and discourages the practice of handbrake turns to preserve tyre life. 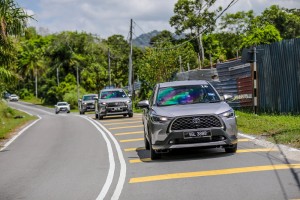 This is always the tough question. If you place value on an SUV that behaves like a sports car at 200 km/h then this isn’t for you. But if you want something that gets you places, in a dependable and fuss-free way, the Corolla Cross is priced acceptably for what it offers.

Is this perfect? No. Unless it has more luxurious interior trim, a fatter steering wheel, and perhaps rear seats with better thigh support (even though I almost never get to enjoy it), as well as an extra 100 hp on tap. If these things don’t matter much to you, then…