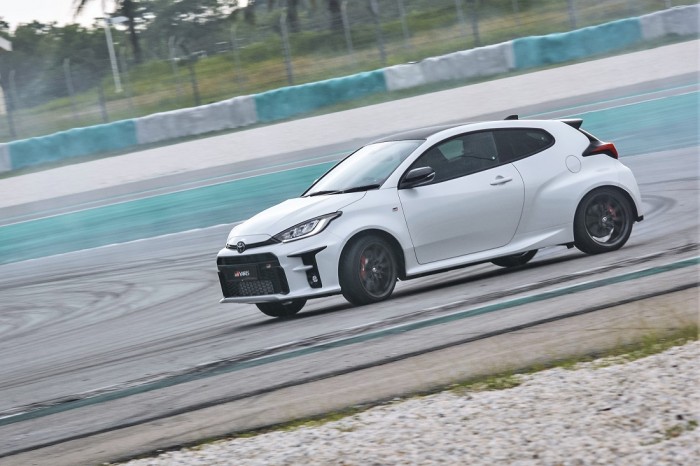 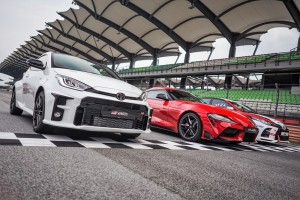 It looks like Toyota is going all out to reclaim the ‘sporty’ proposition it owned in the days of the Supra, Levin, Celica and MR2. In fact, Toyota has a strong rally heritage dating back to 1973 that includes four World Rally Championship (WRC) Manufacturers’ Championship titles, and three Drivers’ Championship titles. UMW Toyota Motor Sdn Bhd is bolstering that with the launch of the Toyota GR Yaris in Malaysia.

The highly-anticipated performance hatchback has a limited global production volume of only 25,000. It is built in Toyota’s Motomachi facility, on a dedicated Gazoo Racing production line, near the birthplace of the Lexus LFA. Due to its limited numbers, Malaysia will get less than 200 units of the GR Yaris giving it some exclusivity.

To commemorate the launch, UMW Toyota Motor Sdn Bhd is offering an Early Bird Package that offers buyers an exclusive helmet bag, a GR Yaris scale model and a GR Yaris Driving Experience in 2021. The combined value of this package is RM5,000.

The GR Yaris is essentially a WRC car built for the road and is the only WRC road legal car you can buy for non-competition purposes. Even before designers produced the very first renderings, it was conceptualized as a WRC car – designed, engineered and built using the expertise and knowledge of a winning WRC team; and then turned into a road-going car. This is contrary to the convention of converting a mass produced car into a rally car.

The GR Yaris represents Toyota’s first homologation model for the WRC since the Celica GT-FOUR, last produced in 1999. The GR Yaris is built on a unique platform combining Toyota’s new GA-B platform (the new generation Yaris hatchback) with a rear section adapted from the GA-C platform (the Corolla and C-HR). The GR Yaris is engineered in collaboration with the Toyota Gazoo Racing World Rally Team and Tommi Makinen Racing, under the stewardship of its team principal and WRC legend, Tommi Makinen. 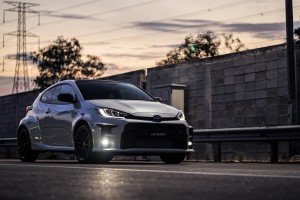 The team’s WRC designers and engineers were able to focus on perfecting the aerodynamics, weight distribution and lightweight construction of the car – three key qualities essential to achieving the best performance and driveability. The result was a lower roofline to enhance the GR Yaris’ aerodynamic performance; an all-new 1.6-litre turbocharged engine; better chassis balance to improve handling, stability and responsiveness; and the birth of a new three-door body shell made from lightweight materials including carbon fibre polymer and aluminium. These factors allow the car to deliver an impressive power-to-weight ratio while the new platform allows for a wider rear track and new double wishbone rear suspension system. 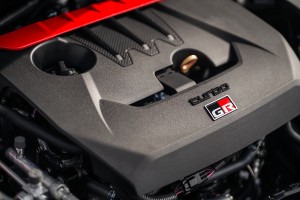 This performance hatch is powered by a 1.6L inline three-cylinder turbocharged engine with DOHC and intercooler that generates 261 PS @ 6,500 rpm and 360 Nm of torque @ 3,000 – 4,600 rpm. This is paired with a six-speed manual gearbox with i-MT (Intelligent Manual Transmission). The i-MT function detects the driver’s shifting and matches the engine speed to provide a smooth and comfortable shift feel. Every detail was addressed to project its performance pedigree. The gear shift lever is positioned high on the centre console and set closer to the steering wheel for quicker shifting while the shift stroke is shortened and lightened for a more engaging feel.

“The 1.6-litre engine follows the WRC 2 regulations. We can safely call it the world’s most powerful three-cylinder engine, the lightest and the smallest 1.6-litre turbo charged unit currently in production,” said Atsunori Kumagaya who led the development project of the GR Yaris. 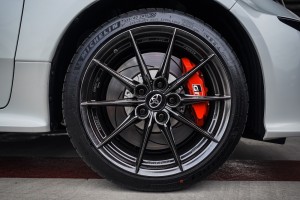 The GR Yaris is fitted with 18″ inch BBS forged alloy wheels wrapped in Michelin Pilot Sport 4S 225/40 R18 tyres which are exclusive to the Performance Pack Edition. The wheels are driven by an all-new full-time four-wheel drive system (GR-Four) offering Normal, Sport and Track modes. It is the first four-wheel-drive system to be developed since the one in the Toyota Celica GT-4 over 20 years ago. The GR-Four system distributes power between the front and rear axle via a high response coupling and an electronically controlled multi-plate type clutch that manages the power split between the front and rear wheels.

In Normal mode, the torque is split 60:40 front:rear, changing to a 30:70 split in Sport and 50:50 in Track mode for an even balance. The Performance Pack Edition also includes a Torsen limited slip differential (LSD). 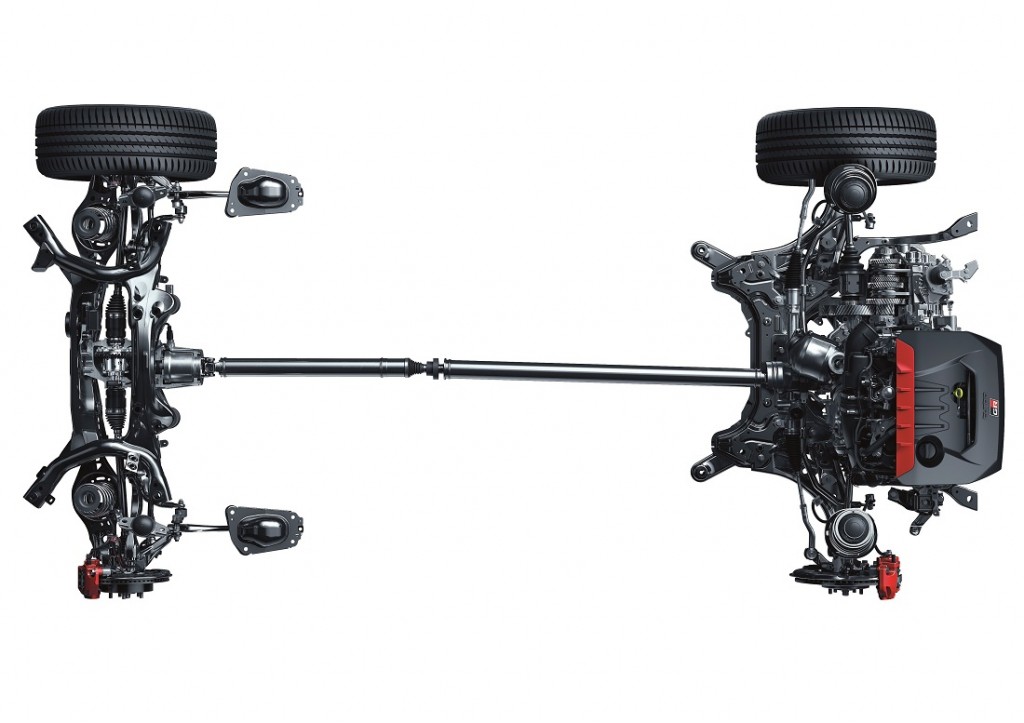 The GR Yaris weighs in at 1,280 kg due to the lightweight construction method that preserves structural integrity and offers better power-to-weight ratio. This includes a roof made of a new forged (rather than woven) carbon material and C-SMC (carbon sheet moulding compound), aluminium bonnet, front doors and rear boot, as well as a three-door design which reduces weight by another 24 kg, and thin-sheet steel in the wings and side members, with light and strong high-tensile steels in critical areas to ensure structural rigidity and ability to safely absorb and dissipate impact forces.

The relatively small 1.6L turbo engine, as well as suspension and brake components also contribute to weight reduction. The suspension is tuned by the Toyota Gazoo Racing World Rally Team to maximise tyre grip. The front anti-roll bar of the Performance Pack Edition is thicker and the diameter of the front suspension spring is increased for greater stability and agility. The front brakes are 356 mm ventilated two-piece brake discs with a four-piston red aluminium GR calipers, and the rear uses 297 mm ventilated discs with a two-piston aluminium red GR calipers. The GR Yaris is also fitted with a mechanical hand operated parking brake for extreme cornering in rally stage driving.

The interior of the GR Yaris has been kept simple and functional, with priority on weight saving. The seats use a light but highly rigid frame that is wrapped in black leather with red stitching (front), and all-black  leather (rear). The sports pedals are drilled aluminium designed with a wider surface for easier contact and to facilitate heel and toe shifting. The pedal position, pad angle and pressing angle have also been calculated in line with the driver’s hip point to gain the best possible controllability.

“We are absolutely excited and thrilled to welcome the GR Yaris to Malaysia. It is a car that has attracted so much of attention and praise globally, it sets a new and higher bench mark not only for a vehicle in its segment but also in the very way in which the car was actually built, and when you’re finally confronted with it, all I can say is the GR Yaris’ reputation as a competition-bred performance car precedes it,” said UMW Toyota Motor Sdn Bhd President Ravindran K. 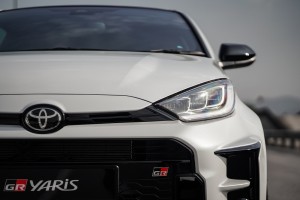 Meanwhile, UMW Toyota Motor Deputy Chairman and Gazoo Racing Malaysia’s Chief Motorsport Officer Akio Takeyama said the GR Yaris underlined Toyota’s commitment to excel at the highest levels of international motorsports and to channel this experience, knowledge and benefits back into manufacturing ever better vehicles for the masses. “The manufacturing process is a first for Toyota, whereby the competition elements and requirements dictated the building and engineering of the GR Yaris. The end product and the results have been phenomenal.”