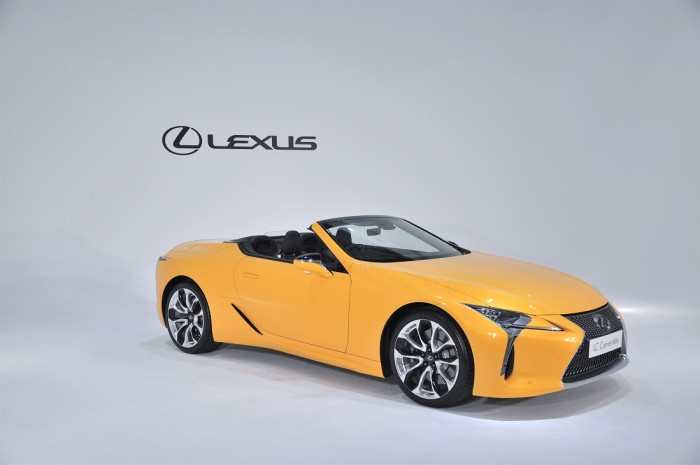 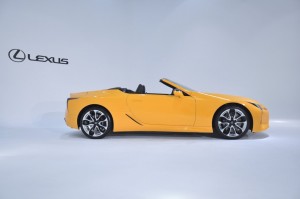 If you have a million and some change laying around, and you enjoy taking the top off then the Lexus LC 500 Convertible is for you. Just launched by Lexus Malaysia, the LC 500 Convertible is the premium marque’s first convertible model. It is priced at RM1,350,000 after sales and service tax, but excludes insurance.

Replacing the roof of the LC 500 with a soft top allowed Lexus engineers to further accentuate the sleek lines of the coupe body style which would not have been possible with a bulkier hard top. The soft top material is made up of four layers (three are fabric and one for NVH). The roof is hydraulically controlled and features an innovative folding mechanism. It can be operated at speeds up to 50 km/h, opening in 15 seconds and closing in 16 seconds. A tonneau cover is incorporated to cover the roof storage space to give the convertible a neat and sleek appearance.

To blend the soft top roof into the car’s overall silhoutte, its profile is lifted slightly with a ‘kicked up’ design. The rear spoiler’s surface has been broadened to emphasise the low and wide stance of the car. Additionally, the centre brake light has been integrated into the bootlid since there is no windshield like the Coupe. 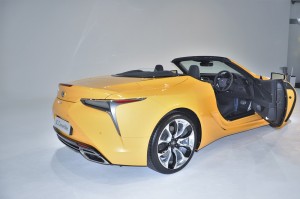 Extensive airflow studies and sound insulation keep wind noise and turbulence to a minimum when the roof is down, enabling the LC 500 Convertible to retain excellent aerodynamic performance. A transparent deflector is installed in between the rear seats to improve cabin comfort at speeds below 60 km/h, reducing wind intrusion by about 20%. Further, despite the addition of the roof folding mechanism, the LC Convertible only adds 90 kg over the Coupe. Its luggage compartment is still a fairly usable 149 litres.

Its other exterior features are similar to the Coupe’s i.e. the sharp front end, three-beam LED projector headlights, signature spindle grille, and rear LED combination lamps with infinity mirror design. In addition, the door handles are flushed with the sheet metal to improve aerodynamics.

The interior of this 2+2 grand tourer uses the omotenashi (hospitality) mantra and is filled with an intuitive layout and luxurious appointments. From the fine semi-aniline upholstery to the low profile instrument panel to offer a better view of the road.

The driver is fed information by the 8″ instrument cluster, which features a moveable meter ring reminiscent of the LFA’s, and the head-up display. Other functions within the car can be accessed via the 10.3″ HD display through Lexus’ Remote Touch Interface touchpad. The multimedia system includes Android Auto and Apple CarPlay for easy connectivity, enabling the use of Google Assistant and Siri. The entertainment system is a 13-speaker Mark Levinson Reference Surround Sound System which ensures premium sound quality even during open top driving.

The interior entertainment is boosted by a sound generator transmitting the engine sound through the dash panel. Further, engine sound is enhanced by an exhaust valve where a clamshell muffler switches between two different exhaust notes depending on throttle input. 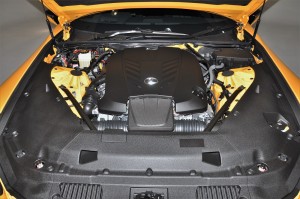 Making the engine sound is a 5.0L V8 naturally aspirated engine (2UR-GSE) with a power output of 470 hp and 540 Nm of torque. It is paired with a 10-speed Direct Shift automatic transmission managed by an Artificial Intelligence Shift Control. Running on 21″ forged wheels with two-tone polished finish and black coating, the LC 500 Convertible takes only 4.9 seconds to go from zero to 100 km/h. The power is transmitted to the rear wheels via a Torsen Limited Slip Differential. Its top speed is limited to 270 km/h.

Providing ride comfort and handling is an Adaptive Variable Suspension which controls the damping force up to 650 levels for smoother and more precise control. Further, a Performance Damper connects the right and left sides of the rear frame to reduce body flex and reduce vibrations.

The Lexus LC 500 Convertible complements its performance with the Lexus Safety System+. This system includes a Pre-Collision System, Dynamic Radar Cruise Control, and Lane Departure Alert with Steering Control. Other safety systems include Automatic High Beam, Blind Spot Monitor and Rear Cross Traffic Alert, as well as six SRS airbags. In the event of a roll-over, hidden Active Roll Bars extend upwards to provide support if the car is upside down.

“The new LC 500 Convertible brings with it specific attributes that can only be associated with open top driving,”said Deputy Chairman of Lexus Malaysia, Mr Akio Takeyama. “Armed with dynamic performance and handling as well as a sexy silhouette, the new model not only elevates the sensorial experience for the driver but also allows them to feel more closely connected to the car, the road and their surroundings.”

The Lexus LC 500 Convertible is covered by a 5-year unlimited mileage warranty and free service, or for the first 100,000 km, as long as it is cared for accordingly by trained Lexus professionals at authorised Lexus Centres. If you book one now, you can expect to receive it some time in February 2021.

2021 Altair Enlighten Award To Include Award For Sustainability Initiatives