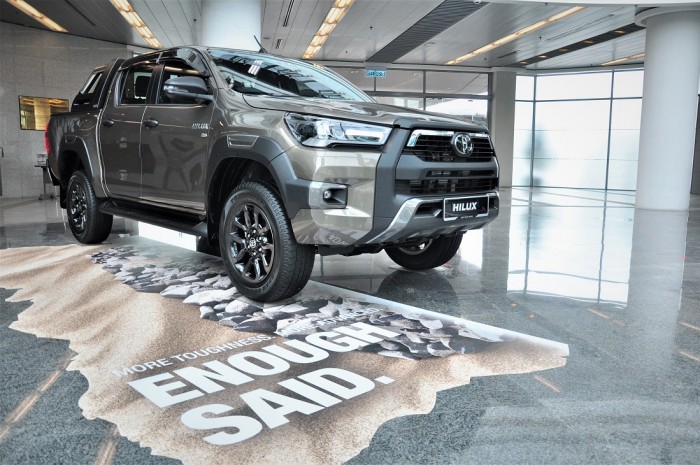 The upgraded 2020 Toyota Hilux is officially launched. As Malaysia’s best-selling pick-up truck, the new Hilux bears quite a major update in appearance. Updates can also be found in the cabin as well as under the bonnet, and includes the Toyota Safety Sense suite. For the 2020 Hilux, UMW Toyota Motor Sdn Bhd has made available five variants (only one is a single cab) i.e. the flagship Hilux Rogue 2.8 Double Cab AT; Hilux 2.4 V AT Double Cab; Hilux 2.4 E AT Double Cab; Hilux 2.4 G MT Double Cab; and Hilux 2.4 MT Single Cab.

The new Hilux wears a bolder look, with very prominent front grille and bumper design elements. On the Rogue, the black cladding flows from the fog lamp bezel to the wheel arches right to the back. The LED headlights and rear lights are also redesigned. There is now minimal use of chrome on the Rogue, which I personally prefer. Further, the cargo bed comes installed with a pair of LED lights for night-time loading and unloading convenience. The tailgate also gets hydraulic assistance making it easier to open and close. Do bear in mind that some of these features mentioned are available only on the Rogue 2.8 and 2.4 V (such as the bi-LED headlights; others get new headlights but are halogen) so be sure to check the spec sheet. 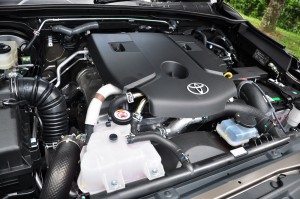 Under the bonnet, the Hilux Rogue has a 2.8L turbodiesel engine which has received technical improvements to improve power output and torque. The output is now 240 PS @ 3,400 rpm (+27 PS) and 500 Nm @ 1,600 – 2,800 rpm (+50 Nm). This 2.8L diesel engine (1GD-FTV) is one of the updated Global Diesel engines designed to provide stronger low-end torque delivery, better acceleration response, greater reliability and improved fuel efficiency. With the new tweaks, the fuel consumption has reduced by 4% to an average of 10.9 km/L, despite the increase in power.

Meanwhile, the 2.4L 2GD-FTV engine, which also has a Variable Nozzle Turbocharger (VNT) and an intercooler as well as a common-rail system, has received refinements to improve cooling and fuel economy. By increasing pressure in the common-rail system, fuel efficiency has been improved by 5%. Power output remains unchanged at 150 PS and 400 Nm.

Further, the improved engine for the new Hilux allows longer service interval so it is now every 10,000 km / 6 months (instead of 5,000 km / 3 months). This will help to reduce maintenance costs in the long run. 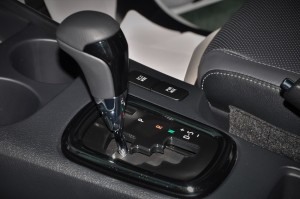 All Hilux variants are fitted with 6-speed transmissions. The Double Cab variants are only available with Super ECT automatic transmission with Sequential Shift, while the Single Cab is available only with a 6-speed manual. Two driving modes can be selected, while on the move, if the driver wants to prioritise fuel economy or have stronger acceleration. 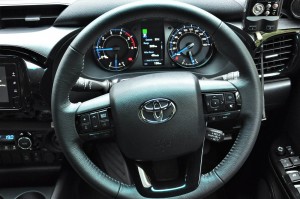 For driving, the Hilux uses a hydraulic power-assisted rack and pinion steering system with a Variable Flow Control (VFC) system (except for the Single Cab variant) to reduce demand on the power steering pump, thus benefitting fuel economy. Additionally, the new Auto Limited Slip Differential (Auto LSD) which uses the Traction Control System (TRC) provides for better grip and stability in difficult driving conditions. The TRC helps to control braking and engine output when one of the rear wheels start to spin. The Auto LSD is faster and more effective compared to the mechanical 4×4 system.

In the cabin, a more premium image is evident with the new trim. For the flagship Rogue, the premium interior ambience is elevated with the use of clear blue door trim. Both the Rogue and 2.4 V also get illuminated footwell, room and push start button. They also feature a new Optitron meter cluster with a 4.2″ colour Multi-info Display, and a six-speaker infotaiment system with Apple CarPlay and Android Auto-ready connectivity. The seats are perforated and combination leather respectively, with the driver’s seat fitted with electric 8-way adjustment.

Every Hilux variant comes with a customized security system consisting of an engine immobilizer, alarm and cabin intrusion sensor. Additionally, a Vehicle Telematics System (VTS) is installed as standard in the Hilux Rogue and 2.4 V (option for the other variants) and this enables real-time tracking of the vehicle using GPS signals.

Exterior colour choices are Bronze Mica Metallic (new), Crimson Spark Red Metallic, Attitude Black Mica, Phantom Brown Metallic, Medium Silver Metallic, Silver Metallic and Super White II. The Single Cab is available only in Solid White. The prices were already announced prior to the launch and can be found here. Monthly instalment starts from as low as RM788 with an additional RM89 for the Toyota Service Savers package through the Toyota EzBeli financing scheme (depending on variant, terms and conditions apply).

The Toyota Hilux is covered by a warranty of 5 years / 150,000 km (whichever occurs first after original registration).

With the Toyota Service Savers package, you can buy the new Hilux and save up to 13% during vehicle servicing and enjoy discounts up to 20% for selected items and parts replacement. 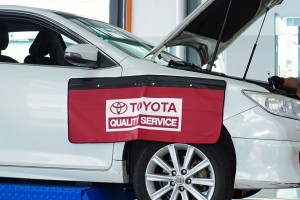 The package is available for a period of 5 or 3 years, and the cost of the package can be included in the financing scheme as part of the vehicle purchase cost. The Toyota Service Savers package is available from RM3,580 and can be used at any authorised Toyota service centre nationwide, with attention provided by trained technicians.

Peace of mind can be guaranteed as all work is done using professional tools and the parts are Genuine Toyota parts or approved by Toyota.

Customers are also recommended the Toyota Insurance Package, exclusive to Toyota owners. This insurance package offers benefits which can allow an owner to regain use of his or her vehicle as quickly as possible after an accident. Owners can choose from the various insurance companies which are on UMWT’s panel of insurers. The panel of insurers trust UMW Toyota Motor’s quotation of the cost of parts to be replaced. If not exceeding RM20,000, the claim can usually be approved within 24 hours, enabling repair work to commence quickly.

Besides faster processing, choosing the Toyota Insurance Package also brings many other benefits that can reduce the outlay of money on their part. For example, there is no requirement to pay a betterment charge which is a share of the cost of parts that are replaced. This is required in some insurance policies because the part replaces an item that may be older and worn out. Many insurance policies have an Excess Clause which requires a certain portion to be borne by the vehicle owner. This is usually a fixed amount and the insurance company will pay for the remainder above that amount.