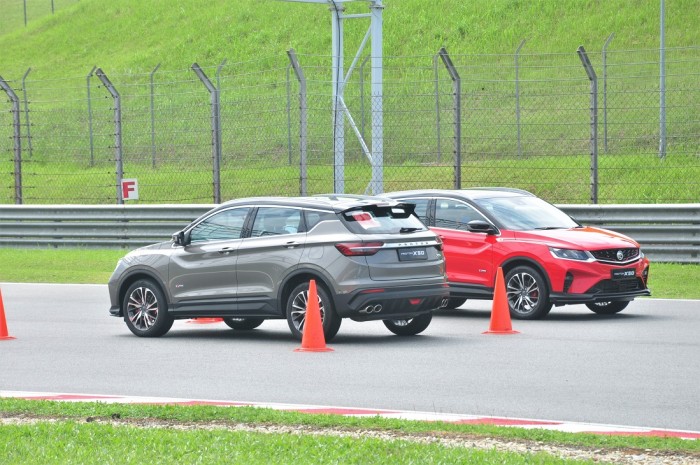 It is very obvious that the amount of buzz recently generated in the internet and numerous chat groups over the Proton X50 is making it look like the most highly anticipated model since the X70. After spending some brief moments experiencing the key features of the X50, we list of some of the details of this compact crossover. 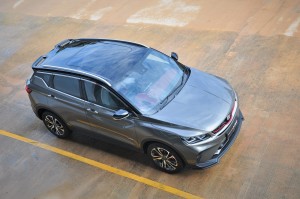 We won’t delve into its physical looks or design except to say that it is pleasing, not polarising. There are creases and pinches on every exterior surface but they don’t seem excessive. The X50 looks good from nearly every angle except for maybe the dead-on from the front or rear, as it makes its compact B-segment dimensions look more obvious, but that is to be expected. It is a compact B-segment crossover / SUV. The most important impression is that the X50 does not look like a budgetary compromise. 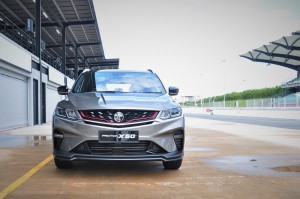 The X50 uses the Geely group’s BMA (B-segment Modular Architecture) platform, which was developed over a four-year effort by nearly 100 modular architecture experts from over 20 countries. But it is more than a mere rebadge of the Geely Binyue / Coolray. Firstly, the re-engineering into a right-hand-drive vehicle is a task in itself. Headlight angles, wiring harnesses, sensors, dashboard, and many other components have to be re-done and relocated. Secondly, the ride and handling had to be adapted to Malaysian roads and driving styles. There are new springs and dampers, anti-roll bar and electronic power steering system to optimise ride comfort. 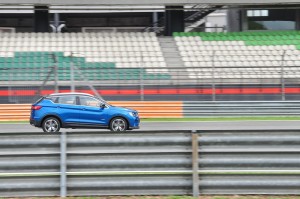 Our time at the Sepang circuit was only in the range-topping 1.5 TGDi Flagship variant. This has a more powerful direct injection turbo engine, producing 177 PS and 255 Nm (vs 150 PS and 226 Nm of the port injection engine). Average fuel consumption between the two are nearly equal with the TGDi 0.1 litre / 100 km better at 6.4 l/100km. This engine (jointly developed by Geely and Volvo) has gone through 1.4 million km of tests and is used in over 550,000 vehicles worldwide.

Having only three cylinders, the development was focused on addressing the vibrations and noise resulting from the imbalance. This includes stiffer components, injectors with anti-vibration design, silent fuel pump and even an insulated engine cover. The powertrain is also designed for better thermal management and fuel efficiency, with a 7-speed wet dual clutch transmission that has a maximum of 97% transfer efficiency. The official 0 – 100 km/h time for the 1.5 TGDi is 7.9 seconds. 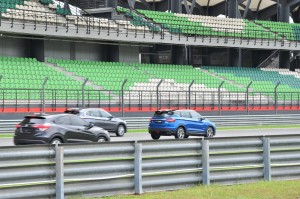 On the track, a 0 – 110 km/h drag race between another 1.5L three-cylinder turbo and a 1.8L N/A mostly favored the X50 as the victor. This is by virtue of its relatively higher total power output compared to its drag race challengers, as well as the smooth-shifting, drive-by-wire dual clutch gearbox. That said, it still has to be emphasised that the X50 should not be considered an outright performance and power monster. The X50 was mostly driven around in Sport mode but you can also opt for the more sedate Eco or Normal. The power steering also comes with four choices of feel. 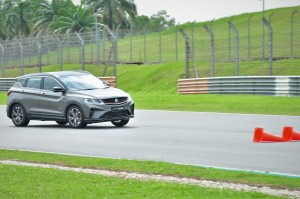 On a drive around the track, it is clear that the X50 is biased towards providing a comfortable ride. The cabin is quite a serene place with muted outside noise and comfortable seating. However, race track surface and regular road surface are very different in character. There is quite a bit of lean in the corners but it is expected of an SUV. The rear seats have ample legroom for tall adults though shoulder room might be a pinch with three abreast. There are rear air vents and two USB ports for passenger convenience.

Also highlighted is the Level 2 autonomous driving technology of its Advanced Driving Assistance Systems (ADAS) which is only available in the top spec model. Other than the blind spot information system, intelligent high beam control, lane departure warning, forward collision warning, and autonomous emergency braking (now with pedestrian detection) it now adds on intelligent cruise control and adaptive cruise with stop & go feature, as well as lane keeping assist. Level 2 autonomy provides more assistance with the throttle, brakes and steering but still requires the driver to be aware and in control of the vehicle. 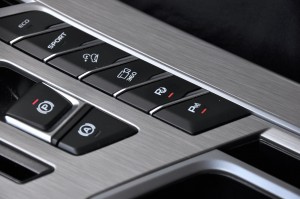 The biggest USP (unique selling point) of its ADAS might be the Automatic Parking Assistance. This is capable of performing perpendicular / vertical parking and parallel parking, including exiting a parallel parking spot. As mentioned, the driver is still responsible even though the X50 can detect the parking spot, vehicles and other obstructions, and will select the right gear and steer the vehicle with no human input. While this is being done, the driver has to hold down the auto park button. Taking your finger off the button will deactivate the system; this is a safety feature. This demo was done in optimal conditions and we look forward to test it in the real world.

Since PROTON has opened up the order books, and provided two preview sessions to selected groups, we can expect the official launch of the X50 to happen soon. Like all right-thinking consumer, the biggest question in mind would be “How much does it cost?”. The selling price talk is also the most conspiracy-theory level thing about the X50.

And even though the attention has been on the top-of-the-range Flagship variant, it would be interesting to note the eventual price point of the base 1.5T Standard variant. Would it be priced attractively enough to basically offer folks less encouragement to look at the others? This, to us, is the most highly anticipated detail that even its rivals want to know.