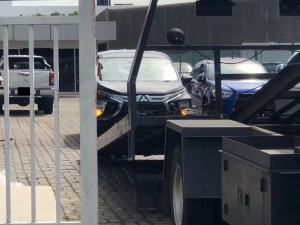 The internet is full of information, if you know where to look. And from that haystack of data, some needles were found. There are a couple of recent photos of the Mitsubishi Xpander being loaded on a flatbed tow truck at what appears to be the compound of a Mitsubishi Motors facility in Malaysia (there are several other Mitsubishi models in the area).

Earlier in the year, there were photos circulating of a Mitsubishi Xpander being inspected at an assembly area, allegedly located in Malaysia. The only known facilities which assemble Mitsubishi Motors vehicles here are in Kuala Lumpur and Pekan. It is likely to be Pekan as it looks to be a larger facility; the Kuala Lumpur facility is an outsourced assembly plant.

Anyway, the Xpander seen in those photos is that of the facelifted version. It features the updated front grille and a dual-layer fascia with redesigned three-segment headlight cluster in the front bumper, similar to the more SUV-styled Xpander Cross variant. Since this is the facelift version, the headlights should be LEDs, although the fog lights clearly are not. The LED daytime running lights flank the grille. And like all current Mitsubishis, the brand’s Dynamic Shield face is very prominent.

The Xpander is a 7-seater MPV based on the XM concept. It has a wheelbase of 2,775 mm with a body that is 4,475 mm (l) x 1,750 mm (w) x 1,695 mm (h). The Xpander is already on sale in neighbouring Indonesia, Thailand and Philippines where it has quite a following. As this is an entry-level 7-seater MPV / SUV, its price should be within the range of the Toyota Avanza, Perodua Aruz and Honda BR-V.

The Mitsubishi Xpander is powered by a 1.5L MIVEC engine with output of 103 hp and 141 Nm of torque. And since it plays in the same budget-friendly playground, that power will be transferred to the front wheels via a 4-speed automatic transmission.

We assume an official launch in Malaysia will happen soon, judging from these leaked photos.