Tanjung Malim, 29 October – All cars have a finite lifespan and there comes a time where the manufacturer has to stop production of parts to free up resources and space for newer models. Sometimes, people keep their cars longer than this either because it still works fine or they really love the car. But Perodua is showing that it is not pressuring owners of its past models to change to newer ones with its investment in a new stamping machine for its old models.

This investment is part of Perodua’s plan to centralise parts production for its past models at its supplier, IQM Sdn Bhd’s facility. It is also one of Perodua’s many initiatives to help its suppliers expand their business and capabilities, taking them one step closer to becoming global automotive suppliers. 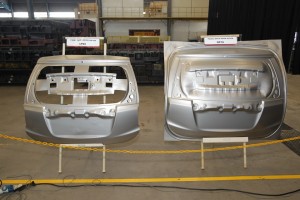 The RM7 million investment, which includes transportation and installation costs for the machine, was made entirely by Perodua. The 1,600-metric tonne hydraulic press stamping machine will produce body parts such as bonnets, side outer panels, rear quarter panels, fenders, doors and roofs for past Perodua models like the first-generation Myvi, Viva, Kelisa and the Kancil.

Perodua has also transfer the parts dies of the past model parts to IQM’s facility so that it frees up space in Perodua’s plants. This also helps to simplify the entire operation, reducing lead time and cost, and improving efficiency. Perodua is also assisting IQM with skill transfer and training for the past model parts production.

IQM has been a Perodua supplier since 2002 and currently supplies metal stamping, body assembly parts and brake tube components to Perodua. It began making Viva parts when production of the model ended in 2014, and last year it began making parts for the second-generation Myvi on a dedicated new line.

“Perodua’s decision to centralise past model parts production at IQM is four-pronged. One, we want to continue supporting owners of our past models with quality, quick and affordable parts through our Body & Paint business, because as long as you own a Perodua vehicle – old or new – we will always be there for you.

“Two, we are committed to empowering all 135 of our Malaysian suppliers, not just by buying from them but helping to develop them via skill and technology transfers. Three, it represents our commitment to the nation and its economy by helping to boost the competitiveness of the Malaysian automotive ecosystem.

“Finally, it represents our commitment to ourselves. To keep improving our quality and efficiency so that Perodua can be a better and leaner company moving forward,” said Perodua President and Chief Executive Officer Dato’ Zainal Abidin Ahmad.

With this streamlining of production and freeing up of space in Perodua’s own facilities, Perodua will be more efficient in focusing on the production of its current models as well as new ones.

Since 1994, Perodua has sold over 3.7 million cars in Malaysia and currently, one third of the demand for Perodua parts is for past models.

With all its current models having over 90% local parts content, Perodua is naturally the biggest buyer of automotive components in the country, having spent RM4.5 billion on parts so far this year out of an earmarked RM5.4 billion for 2019.