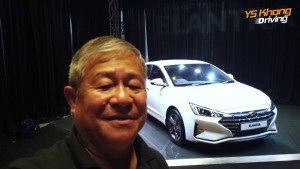 Kuala Lumpur, 19 April 2019 – Hyundai-Sime Darby Motors (HSDM) officially launched the refreshed Hyundai Elantra 2.0 Executive today. I actually thought the outgoing model was quite good-looking, but within a time frame of slightly over a year and a half, the refreshed model is already here. I was told that world-wide, the acceptance for the Elantra waned after the launch of the outgoing model, which prompted Hyundai to quickly come out with this one. 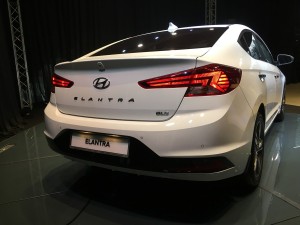 The refreshed Elantra gets a new front end that looks markedly different from the outgoing Elantra, plus a new rear end as well. Just for the record, the main body frame remains the same, as the doors are still the same as the previous model. Looks are quite subjective, and it must be that that I am part of the minority, as I actually liked the previous shape. Still, the new shape is what I would call ‘safe’, made up of mature lines, perhaps laced with some angles, creases and corners that actually make it look quite sporty. The side profile continues to give it a coupe-like look, so the overall demeanor is ‘sporty’. 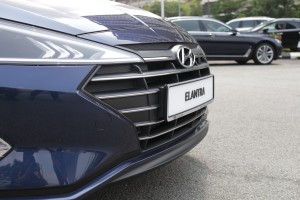 Hyundai has stated that there has also been some work on the torsional rigidity, claiming an improvement of 25.3 percent in this area. Whilst it may sound like jargon to some, what the additional rigidity means is lower levels of NVH (Noise, Vibration and Harshness), plus a better ride and handling as a direct result of a more rigid frame.
The drive train remains the same, made up of the by now familiar Nu 2.0 litre MPI (Multi-point injection) engine that pushes out a respectable 152 PS at 6,200 RPM, and delivers a healthy maximum torque of 192 Nm at 4,000 rpm. Drive is to the front wheels through a 6-speed automatic transmission, and the wheels are 17-inch. Suspension, for the record, is made up of McPherson struts at the front, and a tubular torsion beam at the rear. Brakes are ventilated discs at the front and solid discs at the rear, while steering is electrically powered, as most vehicles today are. 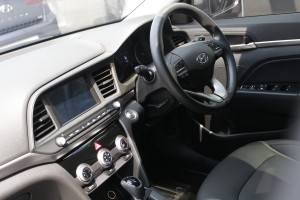 The interior is said to come with a new cluster meter design, but when I looked inside, the instrument lights were not on, so all I saw were some blank rectangles and circles. They really should have switched the instrument panel lights on. The top part of the dashboard has soft-touch covering, while the rest of it is hard plastic. Anyway, the seats are leather-bound, but are mechanically adjustable only. The audio system features Android Auto and Apple Play, while there are two USB ports for convenience.

Naturally, we did not get to drive the car, but the release from HSDM says the new Elantra has a Smart Drive Mode intelligent system that adapts to the driving style of the driver, and switches automatically between two modes, Normal or Sport.

The retail price for the Hyundai Elantra 2.0 Executive is RM109,888 (on-the-road without insurance, Pen. Malaysia)