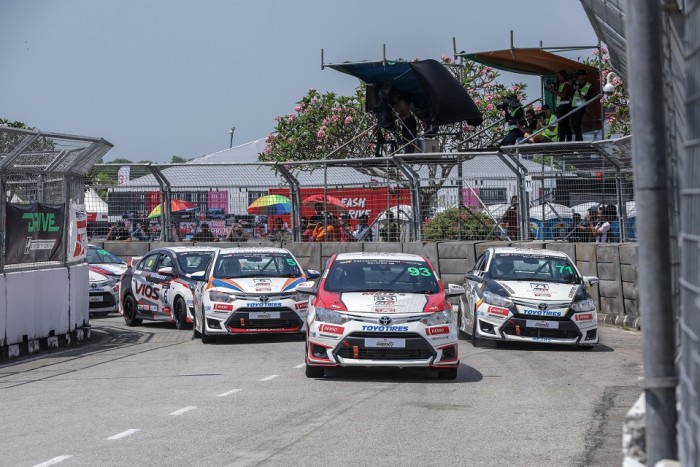 The first day of the Toyota Vios Challenge in Batu Kawan, Penang last weekend was filled with drama, as Zachary Ho put it. On Sunday, the second and final day of racing at Round 3 of the Vios Challenge was no less exciting. There were lots of thrills and spills to keep more than 10,000 race fans and spectators on the edge of their seats at the 1.56km Stadium Batu Kawan street circuit.

In the Super Sporting Class, M7 Racing Team’s Syafiq Ali made the most of his pole position, and a first corner incident, to lead Race 2 from start to finish. Two seconds behind Syafiq was Team Dream Chaser’s Brendan Paul Anthony who finished in second spot in Race 1 the day before, while third place went to Team Nanoplus driver Keifli Othman, who also was in third spot on Saturday.

With a great start, Syafiq held his lead into the first corner, unaware of the drama behind him at the exit of Turn 1. Brendan, who stayed on the outside line into the first corner also managed to steer clear of bunched up cars, and together with Keifli, broke free of the confusion in pursuit of Syafiq.

“I was unaware of what happened behind and was focused on the clear track ahead. It wasn’t until a few corners later that I realized the rest of the grid was nowhere to be seen with the exception of Brendan and Keifli,” said Syafiq. Syafiq was able to maintain a comfortable 2-second gap to Brendan throughout the race, and Brendan having no answer, had to settle for second place.

For Keifli, the two third place finishes were more than he could ask for as he began the race weekend with damage sustained during qualifying. “The incident during qualifying had left me short of new tyres for the race. The team took a gamble not to purchase any new tyres for the race which would have required me to start from the back of the grid. Fortunately, that gamble paid off this weekend but towards the closing laps of the race I just couldn’t push the car any further as I was struggling with grip,” said Keifli.

Sporting Class had its fair share of excitement, with missed opportunities and close contacts. The race ended with Jakson Tan of Revo Technik Malaysia wining the race after fending off a strong challenge from Kenneth Koh and Dato’ Ken Foo.

Jakson, who is team substitute driver, made a brilliant getaway from second spot on the grid to lead the 22-lap race from start to finish. Polesitter, Eddy Tan, faltered his start and dropped to fourth position after being passed by Hiewa Racing’s Wong Chin Eeg and celebrity Shawn Lee. Eddy’s race eventually came to end on the second lap after he braked too late and made contact with the wall.

The top five runners remained unchanged for eight laps, with Jakson leading the pack consisting of Wong, Lee, Eric Yong and Koh. However, when attempting an overtaking manouevre for second place, Lee nudged Wong into the wall, and Lee’s own race ended on lap 17 after also hitting the wall. 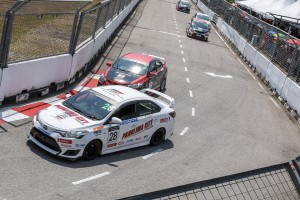 Although he finished second, Koh was undoubtedly the fastest man on the track, climbing the ranks from ninth place on the starting grid to a well-deserved second place. “It was all about keeping it together today, not being overly eager to overtake and coming into contact with anyone on the track,” said Koh who had admitted to causing a collision in Race 1. “I am responsible for yesterday’s incident and it was a very hard lesson for me, but after the dust settled, it has nevertheless been a great weekend of racing.” 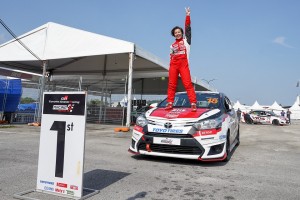 Meanwhile, the action in the Promotional Class was mainly towards the end of the 20-lap race. Starting from pole position, actress Janna Nick immediately jumped into the lead thanks to a brilliant start, with TV presenter and comedian Nabil Ahmad in hot pursuit for some 18 laps. Nabil eventually overtook her but had his work cut out for him as Janna continued to battle for the lead.

Much to the surprise of the spectators, Janna eventually regained the lead just a few corners before the chequered flag. Singer Aiman Tino rounded off the podium spots. “Nabil was obviously faster but I did all I could to prevent him from overtaking. Eventually, I gave way… but just enough for him to enjoy the lead for one lap before regaining it and going for the win,” said an ecstatic Janna who celebrated her first ever race win in 14 races. “Finally (the race win)… It certainly helps to start from pole position.” 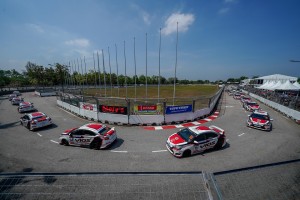 Diana Danielle, winner of Race 1, couldn’t repeat her success as her race ended four laps from the finish line when she went wide into the corner and hit the wall, conceding her fourth place in the race. Other race casualties included Akim Ahmad, whose drive to as high as third position, also came to an abrupt end after fellow singer Khai Bahar jostled him into the wall. Singer Nabila Razali also ended the two-race weekend with two collisions with the concrete barrier.

Akio Takeyama, who is Deputy Chairman of UMW Toyota Motor, is racing in the Vios Challenge for the second year and in Race 2, he managed a fifth place finish.

The fourth and final round of the Toyota Vios Challenge Season 2 is scheduled for 27 – 28 April 2019 at the Sepang International Circuit.