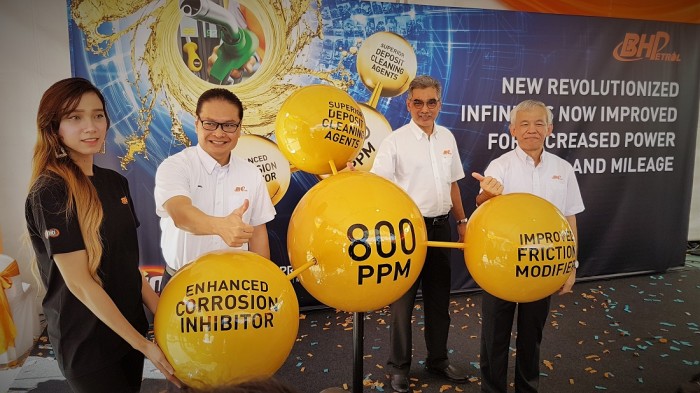 Boustead Petroleum Marketing Sdn Bhd, which retails the BHPetrol brand of fuels, has launched its latest improved version of its premium ‘Infiniti’ petrol. The revolutionised Infiniti petrol is available in both RON 95 and RON 97 grades and retails at the same price as the previous versions.

The new Infiniti petrol has been improved with a formulation that uses the latest generation of additives. There are three major elements to the new additive package i.e. a new Friction Modifier, an enhanced Corrosion Inhibitor, and superior Deposit Cleaning Agents. 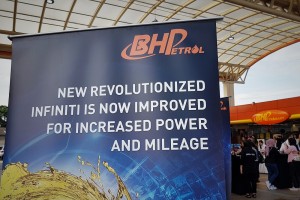 The new Friction Modifier further reduces internal friction which means more energy is available to power the vehicle, thus increasing performance. Lower friction also increases efficiency and fuel economy. Meanwhile, the Corrosion Inhibitor is an enhanced version that puts a layer of protection on metal surfaces inside the engine. This helps reduce corrosion so that the engine remains in optimum performance range for longer. The Deposit Cleaning Agents help remove chemical deposits in the engine to help keep it clean and efficient. These benefits are said to be more apparent through regular and long-term use of Infiniti petrol. 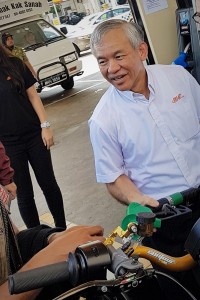 “Since the launch of BHPetrol in 2005, we have consistently aimed to offer best quality petroleum products to motorists. Our association with one of the global leaders in fuel additive technology, based in Germany, has enabled us to develop advanced formulations for ‘Infiniti’ petrol that deliver better performance, improved fuel economy and cleaner exhaust emissions,” said K.T. Tan, Managing Director of Boustead Petroleum Marketing at the launch.

“Over the years, in tandem with the advancements in engine technology, we have also improved the formulation of ‘Infiniti’ petrol so as to maintain the high level of performance and fuel efficiency. Furthermore, to maximise the benefits to our customers, we enhance our ‘Infiniti’ petrol with 800 ppm of additive which is double the minimum treat rate recommended by our additive supplier,” he continued.

“Today, we are proud to once again announce even better ‘Infiniti’ petrol with a further improved formulation which results in increased power and mileage, while also keeping the engine running clean,” he added further. 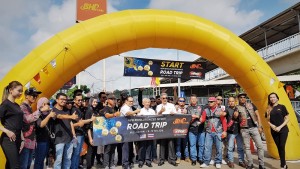 To commemorate the launch of the improved ‘Infiniti’ petrol, BHPetrol organised a road trip for several motoring clubs, as well as some members of the media, to experience the revolutionised petrol touted to have improved performance and fuel economy. The road trip from Kuala Lumpur to Hat Yai, Thailand covered over 1,000 km. Most of the media were given either the Haval H1 or H2 SUV to drive. 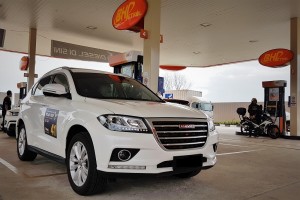 According to Google Maps, the route from BHPetrol Kg Sungai Kayu Ara, Petaling Jaya to BHPetrol Sungai Dua Northbound, for our refueling stop, is 338 km. We refueled the Haval H2 with about 27 litres here, which gives us an approximate fuel consumption of 7.99 litres per 100 km (or 12.52 km per litre). Unfortunately we did not do the same run with the old formulation as a comparison. But with three adults and baggage in the H2, this was acceptable fuel consumption for an SUV with a 1.5 litre turbocharged engine and 6-speed automatic; it has 147 hp and 210 Nm if you must know.