Now that the ‘tax holiday’ (ref the transition period between GST and SST) in Malaysia is at its tail end, most car makers are rushing to register and make deliveries before SST kicks in, but some of them are already thinking ahead about the inevitable price adjustments. Honda Malaysia will be launching the refreshed HR-V real soon, and is looking at carving itself a large chunk of the post-GST market with it. 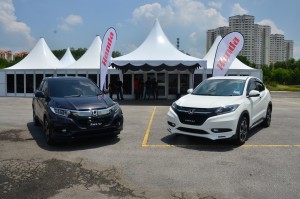 The Honda HR-V ‘refresh’ exercise, or Minor Model Change (MMC) is the mid-life cycle update or what is commonly known as a ‘facelift’. Traditionally, facelifts or MMC’s would be based on the existing body structure, but would usually be accompanied by a minor changes in the body panels, such as the front grille and front bumper, and at the rear, there would be changes in the rear taillights and rear bumper as well. Sometimes some specification upgrades are incorporated to make the vehicle more appealing.

From what we could see today at a special ‘teaser’ drive of the new Honda HR-V, there are two variants available, and these would be the E variant, and a new RS Variant. The RS, which somebody told me, in a serious tone, stands for ‘Road Sailing’ and is a higher spec’ed variant. 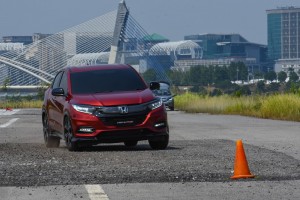 The new Honda HR-V, as expected, does get a new front grille and front bumper as well, and Honda has gone a step further to include a technical change in the headlights. The lights follow the same basic shape, but are projector headlamps are now standard in the E variant. The RS variant goes up a notch with LED headlamps.

The front bumper and grille combination gives the new HR-V a different look – the new grille gets a thick chrome rendering compared to the slim chrome accent on the outgoing one, a reflection of the current evolution in the Honda grilles, and the same format will appear as the new models are released. There are some minor changes to the lower bumper, and a couple of small fog or driving lamps have been incorporated as standard equipment.

Mechanically, the new Honda HR-V is the same as the model it replaces – there is a small difference in the steering mechanism – it now comes with Variable Gear Ratio Steering, which works to improve maneuverability at low speeds, a fact that was attested to during a short trial during the drive. 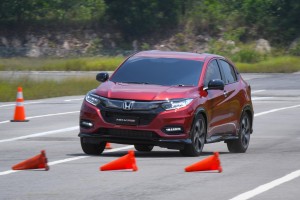 The RS variant is the highlight of the new HR-V – in addition to all the trim differences, the RS gets a very useful feature that has filtered down from the Honda Accord – this is Lane Watch, which in essence allows the driver a great view of the left hand side, or ‘blind side’ of the vehicle. Lane Watch is activated whenever the left hand turn signal is deployed, and a camera provides a wide angle view of potential hazards approaching from the left, such as a motorcycle or another car trying to overtake you from the left. Given Malaysian driving habits, this feature could prevent many untoward incidents and accidents. In addition, the RS variant also gets LED headlamps, and 18-inch wheels with wider tyres compared to the standard E variant’s 17-inch wheels. 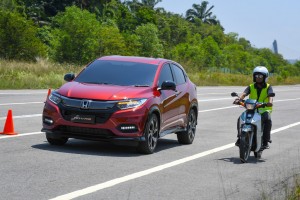 The difference in handling that resulted directly from the larger diameter and wider wheels was immediately felt on a short slalom course set out in the test drive course.

By now you must be wondering about the interior, right? Unfortunately, as a pre-condition to attending the test drive, we had to sign a document agreeing to an embargo on the interior features until the time of launch, so I am afraid I cannot tell you much about the interior, except that it is ‘great’ – which means there is nothing for you to worry about. 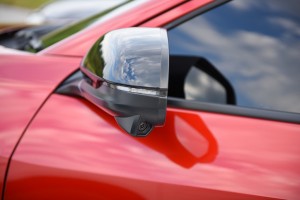 No prices are announced, of course, but we do not expect the apple to fall too far from the tree – thus, if you are in the market to buy one, and you missed the boat for the tax holiday, it might be a good idea to put your booking down so that when it is launched, you will not have to wait, that long.