The UD Trucks Extra Mile Challenge (UDEMC) has crowned its Malaysia-leg winner and it is Muhammad Khairul Bin Abd Halim from Setia Maju Jaya Logistik Sdn Bhd who emerged as Malaysia’s Ultimate Driver in this exciting drivers competition. Muhammad Khairul has won himself a trip to Japan in October to represent Malaysia in the UDEMC Global Final 2018. 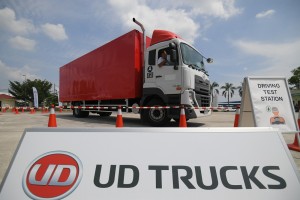 The UD Trucks Extra Mile Challenge (UDEMC) is a friendly drivers competition aimed at increasing drivers’ competency through skills enhancement and knowledge of maximizing the capability of a UD Quester heavy-duty truck.

In Malaysia, the UDEMC is jointly organized by UD Trucks and its sole distributor partner in Malaysia, Tan Chong Industrial Equipment Sdn Bhd (TCIE). This year is the third time this local edition of the global competition was held since its introduction in 2016. It is also the first of its kind to be organized by a Japanese truck brand in Malaysia. 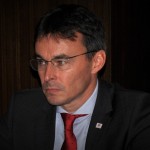 “Truck drivers are the backbone of the economy as they journey across the nation to deliver goods. Now, with the help of smart logistics where innovative features and capabilities can be found in the UD Quester, drivers and companies are able to utilize these to plan, manage and perform their deliveries in more efficient, productive and cost-effective manner. At UD Trucks, we are motivated to continue our rich legacy of building the ‘truck that the world needs today’ and upholding our brand promise of ‘going the extra mile’ to provide  optimum support to our clients, including aftersales,” said Filip Van den Heede, Managing Director Hub Malaysia, UD Trucks.

“UDEMC is not only about driving skills, it is a valuable platform which provides support for the drivers to better understand safe driving, fuel efficiency, and how to maximize truck uptime to reduce unnecessary  operational cost. Thus, we hope that through UDEMC, both our customers and their drivers will benefit greatly with the experience and learnings from this annual drivers’ competition,” he elaborated.

Jaclyn Loy, Chief Operating Officer, Tan Chong Industrial Equipment Sdn Bhd said, “UDEMC is indeed a one-of-its-kind competition that not only benefits the truck drivers but also the company they work for. We received many encouraging and enthusiastic feedback from our customers who understand the value of the competition thus, this motivated us to expand the scale of this year’s competition to the East Coast region.”

“As a long-time partner of UD Trucks in Malaysia, we share the same sentiment in making UDEMC a key platform in the industry that educates drives, fleet managers, customers and other stakeholders on the importance of good driving etiquettes. On our quest in doing so, UD Trucks and TCIE are on a mission to find and recognize the very best drivers on the road – we call them the ULTIMATE DRIVERS. That is why, the UD Extra Mile Challenge was created,” added Jaclyn.

There were ten UD Quester truck drivers who qualified for this year’s final round of the Malaysia UDEMC and they came together to compete at TCIE’s showroom in Ipoh, Perak recently. These 10 finalists partook in a one-day event where they were given briefings on safety and competition route tour. UDEMC Global 2016 champion, Yuzairi bin Ibrahim from ASAC Logistics Sdn Bhd and UDEMC Global 2017 – Best Pre-Drive Inspection winner, Anuar bin Ahmad from Gardenia Bakeries (KL) Sdn Bhd, were also present as UDEMC Malaysia ambassadors, to share their experience and important tips with the finalists.

The 10 finalists were assessed based on the best overall score for Best Pre-Drive Inspection, Best Fuel Consumption and Best Driving Skill, to be named the Champion of UDEMC Malaysia 2018.

In the end, Muhammad Khairul Bin Abd Halim from Setia Maju Jaya Logistik Sdn Bhd was announced the champion of this year’s competition and will be representing Malaysia in an all-expense paid trip to Japan for the UDEMC Global Final 2018 in October 2018. 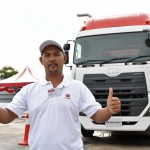 “I have been driving the UD Quester for 3 years and it is such an exceptional truck from all aspects. Last year, I participated in the challenge and was one of the 10 finalists in the competition and I won the Best Pre-Drive Inspection category. My employer and friends encouraged me to participate again in this year’s UDEMC, which I did and never in my wildest dreams that winning it crossed my mine! This competition has taught me a lot, especially the insights and experience shared by past winners Yuzairi and Anuar. I will definitely bring what I’ve learned today to go the extra mile in the UDEMC Global Finals Japan so that I can bring the trophy home!” exclaimed the overjoyed Muhammad Khairul.

As the newly-crowned UDEMC Malaysia champion, Muhammad Khairul is also the 2018 UDEMC Malaysia ambassador. Besides winning an all-expense paid trip to Japan, he also won Quester Parts voucher worth RM2,000 and an exclusive driver training session for all the drivers from Setia Maju Jaya Logistik Sdn Bhd. Besides the grand prize, Muhammad Khairul also created history by winning the Best Pre-Drive Inspection category for the second consecutive year.