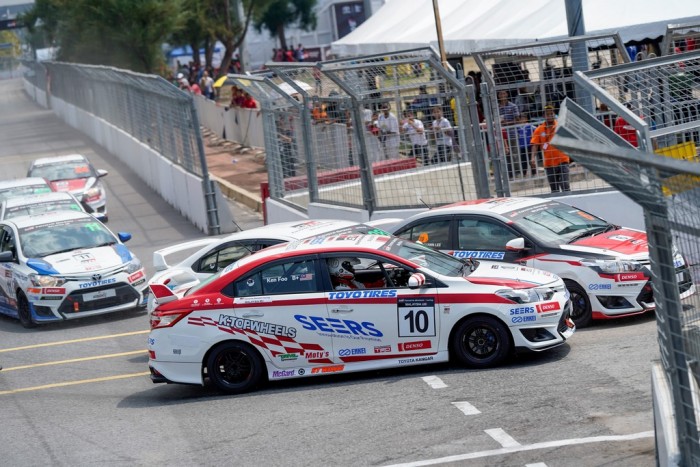 Day Two of the Toyota Gazoo Racing Festival Vios Challenge races was even more exciting than Day 1, which already saw many upset wins. The introduction of ‘Reverse Grid’ for all three Classes of races also threw a spanner in the works for many of the race competitors – the reverse grid arrangement in this case means that the first eight finishers in Race One on Day 1 will be placed in reverse order for the start of Race Two on Day 2. This means that the winner of Race One would be starting in 8th grid, while the eighth position winner gets to be on pole. The second place winner gets to start on 7th grid, while third and sixth position winners will also be exchanging grid position, and so on and so forth.

Day 2 started off in great way with the Super Sporting Class race taking place first at 1.30pm in the afternoon. Syafiq Ali started in Pole, with Mark Darwin in second grid position. Keifli Othman was in third grid, followed by Kenny Lee in fourth. Boy Wong took fifth grid while William Ho was in sixth. Newcomer to the race, Eddie Lew started in seventh, while Brendon Paul Anthony started in eighth. A total of 14 cars started in the Super Sporting Class. 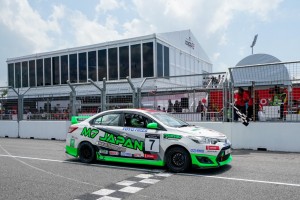 The competition was so intense in Race 2 of the Toyota Vios Challenge Super Sporting Class for professionals that the drama on the 1.65km track at the Sultan Mizan Zainal Abidin Stadium unfolded even before the 14 drivers reached the first corner.

Jostling for position just moments after the lights turned green, Keifli Othman cut in to the left to take the inside line for Turn One (left turn) and made contact with Kenny Lee. That sent Kenny slamming into the concrete barrier and both drivers into retirement.

Eddie Liew, who drove a clean race the day before, was also a fist lap retirement – going into Turn Ten (a right handed turn closely followed by another right hander at Turn Eleven, making it like a U-turn just before the start/finish straight), Eddie got pushed into the wall, which broke his front right wheel, effectively putting him out of the race too. The incident resulted in the opening three laps of the 22-lap race being run behind the safety car as track officials rushed to clear the debris. 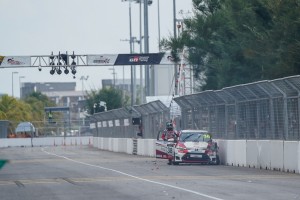 By the time Safety Car left the track, it was a battle at the front between M7 Racing Team’s Syafiq Ali who started from pole position, Mark Darwin of Dream Chaser, and Race 1’s winner William Ho who despite starting from sixth position and the fourth row of the grid, was fortunate to have not only avoided but took advantage of the carnage between Keifli and Kenny at the start of the race. 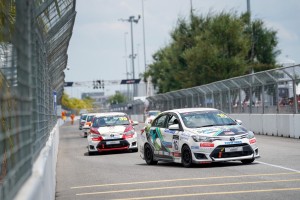 With less than a second separating the top three drivers, William piled on the pressure in the opening stages of the race, first claiming second position from Mark before pushing hard in trying to get past Syafiq. The action between William and Syafiq had spectators at the edge of their seats for at least 10 laps but Syafiq kept his cool and focus, and gradually his lead grew to between 1.5 and 1.8 seconds, while Mark who was in third, ran a solitary race a further 2.5 seconds behind.

“This was a fantastic result for both the team and I. This is my first race victory. My best last season was only in second place,” said Syafiq.

“Being at the front I only needed to make sure that I kept my cool and try to build as much distance between me and the cars behind, and that was precisely what I did.”

With a win in Race 1 and a second place in Race 2, Revo Technik Malaysia’s William Ho concluded Round 1 of the Toyota Vios Challenge with a fantastic lead in the overall championship, with three more rounds consisting of six races ahead. 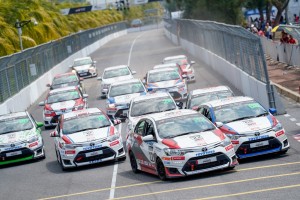 “While I would have loved to have ended the weekend with a double victory, I’m happy with today’s second place. The season is still long and there was really no point taking too much risk at the expense of damaging the car and my chances,” he said.

While there were no notable incidents in the Sporting Class for amateur drivers, the race too concluded in dramatic fashion when drivers were forced to finish behind the safety car due to heavy rain 15 laps into the 22-lap race. 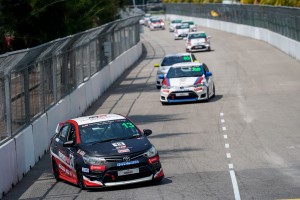 “Starting from pole position, I was lucky to get a good start and just drove sensibly to save my car and finish the race unscathed,” said Patrick.

For Dannies, second place and finishing the race behind the safety car may not have been the most ideal situation, but was certainly the best decision taking into account the safety of the competitors.

“I had a good start to climb from third to second position, and was then involved in a close fight with Vincent before it started to rain and eventually led to the safety car being called out. Safety takes precedence over competition in these conditions and it was the right decision to make in the interest of everyone on the track,” he said. 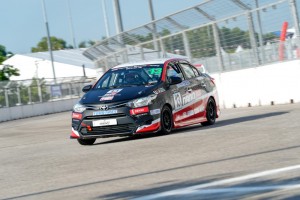 Meanwhile, Race 1 winner Shawn Lee made a brilliant start to surge from eighth position on the starting grid to fifth place by the end of the first lap. The celebrity racer was placed under tremendous pressure by the chasing pack and in the end conceded two positions to Brendon Lim and Kenneth Koh to finish the race in seventh position. Fellow celebrity Mohd Shukri Yahaya however, retired after six laps.

Not to be outdone by the dramas in the Super Sporting and Sporting classes, the trio of newcomer celebrities Akim Ahmad, Aiman Tino and Nabil Ahmad stormed into victory in Race 2 of the Toyota Vios Challenge in an equally nail-biting 22-lap race. 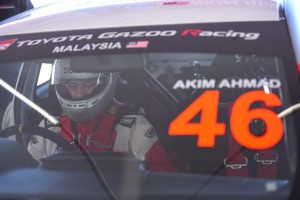 Singer Wany Hasrita failed to make the most of her pole position after stalling at the start. That allowed UMW Toyota Motor Sdn Bhd Deputy Chairman Akio Takeyama to jump straight into the lead with Akim Ahmad in hot pursuit. Setting a blistering pace around the 1.65km track, Akim stormed past Takeyama at the last corner before the end of the first lap and kept his lead until the finish.

As he stretched his lead, the battle 24 seconds behind for second spot was between Nabil and Aiman who were locked in a close fight for several laps until the ninth laps when Aiman found an opening through the tight track to take second place.

Aiman’s speed, consistency and his ability to contain the pressure saw the 18-year-old singer stretch his lead over Nabil as he chased down Akim, chiseling at the gap of more than 15 seconds to finish 1.7 seconds behind and in the process set the fastest lap of the race at 1 minute 19.726 seconds. 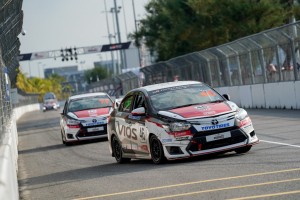 Nabil settled for third, finishing a further 20 seconds behind, followed by Nabila Razali and Wany, who redeemed herself after the earlier mistake to cross the line in fifth position.

In its first ever visit to Kuala Terengganu, the two-day Toyota Gazoo Racing Festival provided race fans and the locals with a colourful weekend on and off the racing track.

While the racing action on track was nail biting and intense, a myriad of activities on the Festival grounds provided spectators with plenty to indulge in, from the display and test drive of Toyota’s latest range of models, to stage performances by celebrities, promotional activities, lucky draws, a Superfans Signing Session for a chance to mingle with the celebrity drivers, display and merchandise booths, stage games, and a simulator racing challenge.

The Festival also welcomed the participation of members of the Toyota Hilux, Toyota Avanza and Toyota Vios Car Club members who not only put their rides on display for the public, but were also invited to judge a contest for the best looking Toyota Vios Challenge race car.

UMW Toyota Motor Sdn Bhd Pesident Mr Ravindran Kurusamy said the Toyota Gazoo Racing Festival is about bringing Toyota’s products, offerings and services to the people, and presented in a carnival atmosphere, will include both motor-racing action, namely the Toyota Vios Challenge, and a myriad of off-track events catering to spectators and families.

“In line with the company’s tagline All About the Drive, both the festival and the Toyota Vios Challenge has been successful in promoting the merits of the brand  particularly for models such as the Vios,” he said.

“On track, the racing activities visibly demonstrated the Vios’ competitiveness, reliability, durability, safety and agility. It’s All About the Drive and truly appreciating the capabilities of the car means you have to first get behind the wheel of a Vios! And this was precisely why we challenged ourselves to organise the Toyota Vios Challenge.”

From Kuala Terengganu, the Toyota Gazoo Racing Festival and Toyota Vios Challenge will move to the Malaysia Agro Exposition Park Serdang (MAEPS) in Serdang, Selangor in October; the Batu Kawan Stadium in Penang in February 2019; with the finale being contested at the Sepang International Circuit in April 2019.