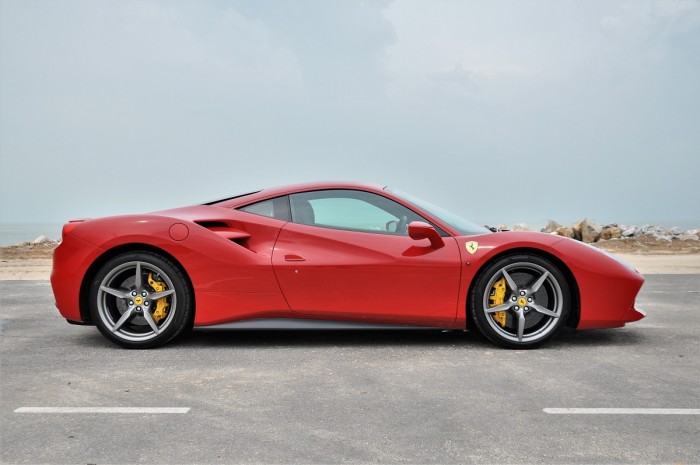 For starters, ‘GTB’ does not stand for ‘Great Torque Beneath’ but rather it is fancy Prancing-Horse-speak for ‘touring coupe’, or ‘Gran Turismo Berlinetta’. The 488 GTB is Ferrari’s successor to the 458, and also a re-juggling of the company’s naming convention.

Ferrari used to have the first 2 digits represent the engine capacity, while the 3rd digit represents the number of cylinders in said engine. With this method, we know the Ferrari 458 has a 4.5L engine with 8 cylinders.

But this naming convention becomes a predicament when you introduce a smaller turbocharge engine into a new model as the marketing guys don’t favor using lower digits. Thus with the 488, Ferrari had decided to replace engine capacity with the unitary displacement value of an engine cylinder, as the first 2 digits. The ‘8’ at the end means it’s still a V8.

The Ferrari 488 GTB looks like a practical re-imagining of the 458. If there’s any flamboyance, it’s done with pragmatism. There are similarities with its predecessor, like the headlights, tail lights and body profile but tweaks were made based on Ferrari’s principle of ‘aerodynamics by subtraction’, a minimalist approach to improve downforce or reduce drag without adding parts.

Starting from the 488’s nose, the twin pillars in the center speed up airflow to the radiators for cooling and to the underside of the car to generate extra load. The tiered horizontal front splitters spanning the width of the face are learned from Formula One and function to channel airflow under the car. This air moves along the flat underbody, guided by vanes, to generate downforce and keep the car sticking to the road.

Over the car’s body, the air is guided to the scalloped air intakes in the rear fenders by the contours built into the car such as the front fenders, wing mirrors, door creases and door handles. The rear air intakes are split by a fin to charge air air into the intercooler at the bottom, and to the engine at the top. To allow this incoming air to exit smoothly and reduce drag, a ‘base bleed’ is integrated into the rear section which accelerates the air out through openings next to the tail lights. To further smoothen airflow, the 488 features a blown rear spoiler integrated into the bodywork, instead of sticking out like a sore thumb.

As you would expect from a sports car, the cabin is driver-biased; even the media controls are with the driver. All the essential switches are literally a touch away, with most of them sitting on the steering wheel. Controls for the headlights, indicators, wipers which are conventionally on stalks are placed on the steering wheel.

But there is a learning curve to having easy-to-reach convenience. For example, the switches for navigation, entertainment and information displays are split between an identical set of knobs and buttons on either side of the steering wheel, and you’ll have to remember which side to go for. Navigation, entertainment and drive information show up on 2 displays in the meter binnacle on either side of the tachometer. Your passenger also gets entertained by an LCD display set into the carbon fiber trim above the glove compartment which shows the speed, gear and engine rpm so that he/she can be a backseat driver in a car with no back seats.

Speaking of no back seats, this the 488 GTB has a mid-engine configuration, the engine sits behind the front seats. Ferrari seems to have made no effort to hide the engine and instead displays it with pride, surrounded by carbon fiber of course. The engine can be clearly seen and heard; features that will not go unappreciated. Between the engine and the two comfortable sports seats is enough space for a couple of weekender bags, as well as a cargo net for odds and ends. If you need extra space, the front of the car can easily hold 2 cabin bags.

Cabin trim is largely a combination of carbon fiber and fine leather, but that’s all up to the buyer what goes in there and in what color. 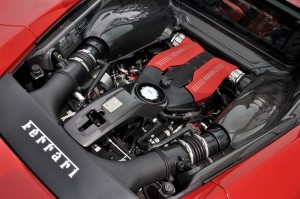 With turbocharging, Ferrari is able to use a more compact engine that produces more power than a larger non-aspirated one. Out of the smaller 3.9L V8 engine with 2 parallel-mounted twin-scroll turbochargers comes 670 hp and 760 Nm (versus 562 hp and 540 Nm from the 458’s 4.5L engine).

Ferrari has tuned the powertrain with different torque maps for every gear to ensure that as long as you’re driving flat out, you will get full potential no matter which gear you are in. Turbo lag can be an annoyance but Ferrari has tuned this engine to respond as quickly as a naturally aspirated one. In the lower gears, power is suppressed until you make the pedal meet the floor. This helps make the 488 easy to handle in slow traffic.

The only way to change gears is with the carbon fiber paddle shifters, but to first get the car to move, you will need to press one of the buttons on the carbon fiber center console. There is ‘Auto’ to move forward, ‘R’ to reverse, and ‘Launch’ to send your heart to your throat.

At the 4 o’clock position on the steering wheel is the manettino which is Italian-speak for ‘change drive modes with this dial’. You have a choice of Sport, Wet, Race, Traction Control Off, and get-me-diapers Stability Control Off modes. If you’re looking for Eco mode, you’re sitting in the wrong car. But despite having Sport as the ‘normal’ mode, the 488 GTB serves out a wide range of driving character, making this a fun car to put on the track or a windy kampung road.

Ferrari has thrown in the works into the ride and handling department. The 488 GTB comes with a ‘Bumpy Road’ option to save your spine. The settings for the adaptive dampers are accessed easily from the steering mounted button. There is also the Side Slip Control 2 software which works with the electronic differential and dampers to put the car in a controlled slide, thus allowing you to accelerate out of a corner faster and look like less of a zero.

This car is definitely not for the person who regularly keeps track of petrol pump prices.