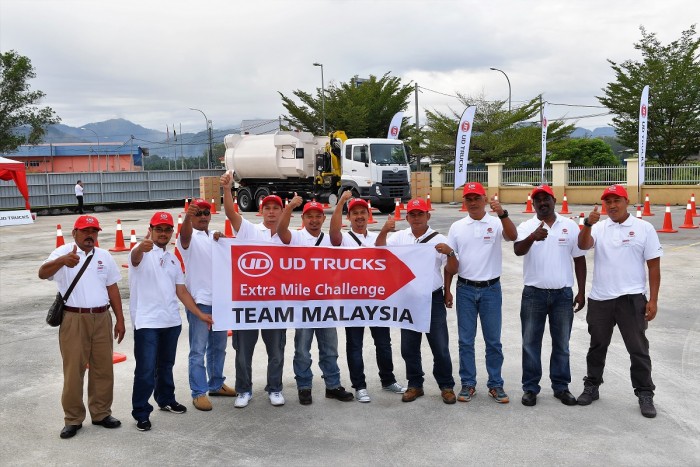 The UD Trucks Extra Mile Challenge (UDEMC) is a truck driving competition open to UD Quester fleet owners and its drivers. It not only fosters closer relations between UD Trucks and its customers, but it helps to promote fuel efficiency, road safety and driving competency among the truck drivers.

Contrary to the negative perception of some, there are actually truck drivers who are professional and take their jobs seriously. The UDEMC, held for the 2nd time in Malaysia and co-organized by UD Trucks (the Japanese truck manufacturer formerly known as Nissan Diesel) and Tan Chong Industrial Equipment (TCIE, its sole distributor partner), is a channel to improve driving and technical knowledge. This has a knock-on effect on efficiency and uptime, which translates to reduced running costs and better profit margins.

This year’s Malaysia winner is Anuar bin Ahmad who drives for Gardenia Bakeries (KL) Sdn Bhd, thus qualifying himself for an all-expense-paid trip to Japan to compete in the UDEMC Global Finals next month. 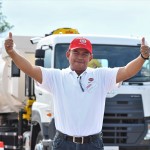 The highly elated Anuar Bin Ahmad shared, “UDEMC has taught me a great deal about how to maximize the capability of Quester and to ensure efficient use of fuel. It is also about how to keep a Quester in optimum condition so that we can go the extra mile together. Winning the Malaysian chapter of UDEMC has given me the inspiration to improve my skills and push my capabilities further. I am really excited and looking forward to the challenge in Japan. Fingers crossed I can win a second trophy for Malaysia!” (Last year’s UDEMC Global Final in Japan saw another Malaysian UD Quester truck driver, Yuzairi Bin Ibrahim from ASAC Logistics Sdn Bhd, take the top spot after displacing competitors from other countries) 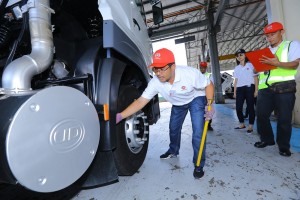 Filip Van den Heede, Managing Director Hub Malaysia, UD Trucks, said “One of the most important and successful philosophies of the UD brand is the ‘gemba’ spirit, which means the ability to go to the actual place to create value. Through UDEMC, we brought out this ‘gemba’ spirit in truck drivers by offering them a platform where they are encouraged to improve their skills and develop more appreciation and pride in their job.” 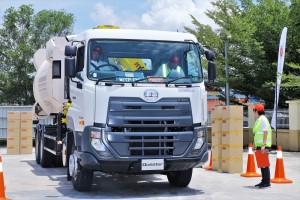 “The cost of fuel is a big issue facing the logistics industry. With UDEMC, we are taking a holistic method that addresses drivers’ skills, vehicle maintenance and performance which all together contributes to business bottom line, efficiency and safety. UDEMC was designed so we could partner with our customers to give them a comprehensive approach to improving fuel economy and profitability starting at the grassroot, by training the end users.”

“In these two years, we have trained drivers on the importance of fuel efficiency and the growing participation from drivers and their employers this year speaks volumes of the impact we have had with UDEMC”, he elaborated.

Wong King Yoon, Chief Executive Officer, Tan Chong Industrial Equipment, said, “UDEMC was organized as a competition to increase truck drivers’ competency by improving their driving skills and knowledge on how to maximize the capability of a UD Quester heavy-duty truck. UDEMC guides drivers on how to maximize all the innovative features of a UD Quester truck in order to achieve the highest truck uptime and reduce operational cost.”

“As UD Trucks’ sole distributor partner in Malaysia, Tan Chong Industrial Equipment looks forward to making this competition a key platform in the industry that educates drivers, fleet managers, customers and other stakeholders about the importance of good driving practices. It is also our commitment in helping Malaysian companies and truck drivers achieve maximum fuel economy, reduced cost, increased profitability, and enhanced safety,” he added.