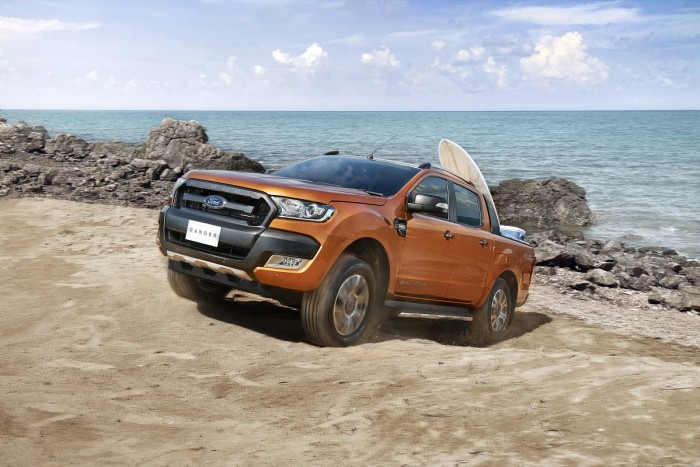 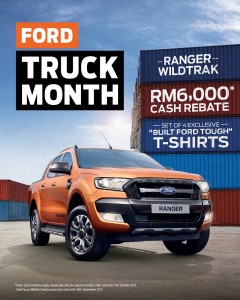 The ‘Ford Truck Month’ is still ongoing, celebrating 100 years of the Ford truck, with deals and savings on the world’s best-selling truck, the Ford Ranger. Sime Darby Auto Connexion (SDAC), the sole distributor of Ford in Malaysia, is offering exclusive RM 6,000 in cash rebates and exciting booking gifts (set of 4 ‘Built Ford Tough’ t-shirts), when you book a Ranger WildTrak at any Ford dealership nationwide; this offers stands from now until the 31 October, 2017.

The Ranger is powered by a 3.2-liter Duratorq 5-cylinder TDCi diesel engine with output of 147 kW and 470 Nm of torque, suitable for heavy-duty towing. The Ranger is also awarded NCAP 5-star safety rating.

“It’s an amazing test of time for Ford trucks as they celebrate a century of leadership, innovation, capability and durability for their iconic trucks,” said Syed Ahmad Muzri Syed Faiz, Managing Director, Sime Darby Auto Connexion, adding that SDAC is extremely proud and honored to be a part of Ford truck’s 100-year celebration.

“We hope more Malaysians will take this limited opportunity to make a smart choice to book and drive home this powerful truck,” he said. “The Ranger is able to handle everything thrown at it with its wide array of smart technologies. Today’s Ranger builds on strengths that lifelong customers have come to love, and then taking them to a whole new level,” he added.

To prove this, the Ranger was pushed beyond boundaries with extreme tests to showcase its toughness in a series of videos – Science of Trucks at Ford Malaysia’s YouTube channel or via http://www.sdacford.com.my/models/trucks-vans/ranger/overview. 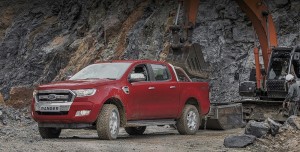 The videos document the Ranger’s Towing Capability, Frame and Chassis strengths that were put to the test by strapping 600 kg of mass and spun at 4.75Gs of opposing forces. Adaptive Load Control, Electronic Stability Control and Rollover Mitigation capabilities, meanwhile, were tested by dropping a load of bricks and an ATV into the back of a moving Ranger.

Further, there is the Rollover Mitigation system to identify a potentially dangerous driving situation and activate the ESC to restore stability. Hill Launch Assist and Hill Descent Control help to pull away on steep inclines and stay in control on steep downhill grades easily. The Collision Warning Alert system detects the
potential of a collision up ahead and it will flash a red warning signal on your windscreen and pre-charge your brakes, ready to stop quickly.