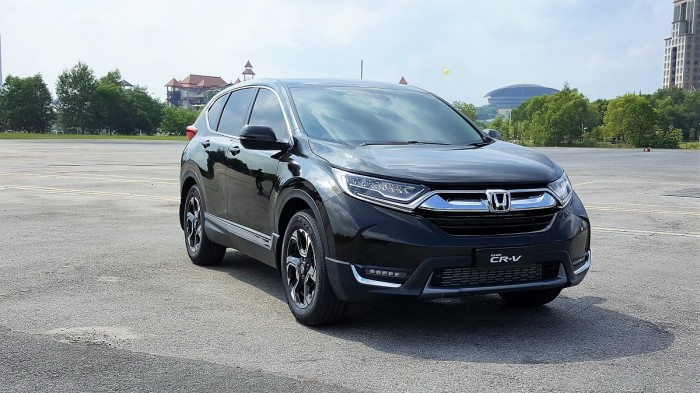 The new Honda CR-V will be launched in early July, or at least that is what all the signs point to, but ahead of the launch, Honda organised what they call a ‘teaser drive’ to give us a taste of what is coming insofar as the 2017 CR-V is concerned.

Well, we know that the new CR-V in Thailand is available as a 7-seater, and there is also a diesel engine option, but for Malaysia, we will only get the 5-seater and the gasoline engine version, at least for now.

The teaser drive was a little different from what we are used to – traditionally, Honda Malaysia has taken us to Thailand to sample the new models, but this time, possibly due to the fact that our models are quite different in terms of specifications, it was decided to have it in a ‘secret’ location somewhere in Putrajaya. 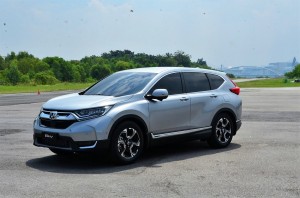 After a briefing session at a hotel, we were chauffeured to the secret location a short distance away – I half expected to be blindfolded, but no, that didn’t happen. What did happen is that there is an embargo on all interior pictures until the launch, so the only pictures you will get to see this time around are only the exterior shots.

The test drive format was – a short burst of acceleration driving both the new CR-V and the outgoing version to compare the power difference, a bit of a slalom to check out the improvements in the overall handling, and a test drive on a runway to check out Honda Sensing, a series of ground-breaking systems that will put the CR-V a few notches above the rest.

Let’s start with the mechanical differences first – the new CR-V looks very much like the outgoing model, but it is a completely new model, I am told. One of the easiest ways to check is to compare the wheelbases – the new one is 2,660mm long while the outgoing model is 2,620mm. Overall width is increased by 35mm to 1,855mm, and overall length is shorter by 6mm, at 4,584mm versus 4,590mm. Ground clearance for the new CR-V is at least 20mm higher.

Despite very similar horsepower figures, the 1.5 litre turbocharged engine will perform better, due to the fact that maximum torque is delivered from as low as 2,000 rpm, and is available in full all through the rev range to 4,000 rpm before it starts to taper off, whilst for the naturally-aspirated 2.4 litre engine, maximum torque is only available at 4,400 rpm, and anywhere below that rpm, the torque is lower.

Besides, in order to unleash all of the 190 PS in the 2.4 litre engine, one would have to have the engine screaming at 7,000 rpm, whereas in the 1.5 litre turbocharged engine, maximum power is unleashed at 5,600 rpm. We all know the Joe Average would hardly want to push his engine all the way to 7,000 rpm, and with all the ‘meat’ lower down in the rev range, the 1.5 litre turbo would provide better driveability.

Both engine variants of the CR-V will be fitted with Constantly Variable Transmissions (CVT), and Honda’s version will have less of the ‘rubber band’ effect. Anyway, at the test drive session, we were given an opportunity to do a back to back acceleration run to compare the 1.5 litre turbocharged CR-V with the outgoing 2.4 litre CR-V – and the 1.5 litre turbocharged CR-V won every time. It is quicker off the mark, and builds speed faster. In the slalom test, I personally felt there wasn’t any difference – which means the new CR-V is just as good in handling as the old one. We did not really get a chance to go for a long road drive, so you will have to wait for our report on that later. However, all indications are that the new CR-V is better on account of it being more powerful.

With the two engine variants, there will be a few trim levels to suit various budgets, with the top-of-the-range model getting all the goodies, which includes Honda Sensing.

Honda Sensing has three features – Driver Cruising Aid, Side Collision Deterrence, and Frontal Collision Deterrence. The key components are a camera and radar system that works with the vehicle systems. For driver cruising aid, Honda Sensing offers two features – Adaptive Cruise Control (ACC) and Low-Speed Follow (LSF). The two features allow a driver to cruise at a safe distance from the vehicle in front of him or her without having to apply brakes or accelerate. ACC maintains a safe distance from the vehicle in front, and automatically applies the brakes should the vehicle in front slow down, braking down to a standstill if necessary. ACC works at between 30 km/h and 180 km/h. At speeds below 30 km/h, LSF takes over and does basically the same function. Whilst the ACC works on highway cruising, the LSF is an additional feature that drivers will find very useful in city traffic – with the new CR-V, driver fatigue will be minimised. According to Honda Sensing engineers who were on standby during our drive, other than the safety objectives, Honda also had the aim to increase driver comfort. 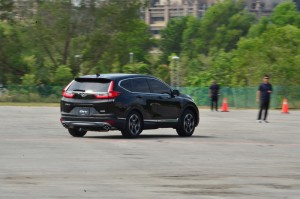 In the area of Side Collision Deterrence, three systems work together – Lane Departure Warning (LDW), Road Departure Mitigation (RDM) and Lane Keep Assist System (LKAS). LDW monitors vehicle lane position and alerts the driver if the vehicle strays out of line. LDW operates at speeds between 72 km/h and 180 km/h, on straight or curved roads. However, if a driver uses turn signals to indicate a lane change, LDW is deactivated. RDM alerts, applies brakes and assists the driver’s steering to prevent the vehicle driving off the road. When cameras detect the vehicle veering too close to the edge of the road, the steering vibrates to alert the driver. If the vehicle leaves a lane marked by a solid line, RDM provides brake assistance and assists steering to bring the vehicle back to the lane. Note though that this system is driver assist only. In LKAS, a camera reads lane markings and assists the driver’s steering to keep the vehicle within the lane, and works between 72 km/h and 180 km/h. Again, the Honda engineers emphasise that this system is for driver assist only. 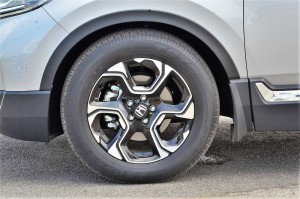 In the area of Frontal Collision Deterrence two systems, Forward Collision Warning (FCW) and Collision Mitigation Braking System (CMBS) work in tandem. FCW detects vehicles in front of the driver utilising a camera and radar system. Visual and audible warnings are triggered if the system detects an imminent collision. If no action is taken, CMBS is activated – CMBS assists in applying brake force progressively when it senses an increasing risk of collision. Note again that these systems are for driver assist only.

The Honda engineers are careful to state that all the systems are for driver assist only – we had a lengthy question and answer session on the Honda Sensing systems – Honda says that the driver has priority over the vehicle control, and in any of the areas, the driver action will over-ride the system.

With Honda Sensing, the CR-V goes right to the top of the heap, insofar as latest features are concerned. Honda Sensing basically is a safety package, but in designing it, Honda has taken it a step further, including features that actually help to increase driver comfort and reduce road fatigue. By incorporating these features, Honda has also raised the bar for others to follow. The engine downsizing exercise is hailed as a positive step forward in terms of reducing the carbon footprint, but to the consumer, it also opens up new boundaries on performance and fuel economy – you can actually decide what you want through your driving style. I cannot wait to put the new CR-V through a more comprehensive test drive – Stay Tuned.