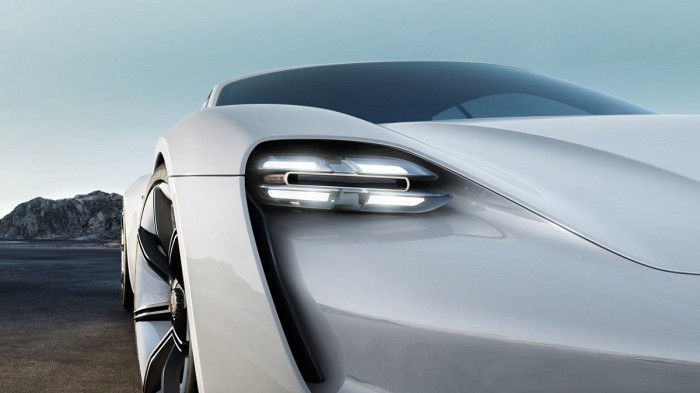 Porsche has set a 2020 deadline to roll out a contender for a piece of the electric pie. Dubbed ‘Mission e’, this is a Porsche that is a Porsche but not a Porsche. With Porsche planning to invest 1 billion Euro on its electric car production, it aims to sell 20,000 units of Mission e annually.

Like all Porsche offerings, the Mission e will come in a few variants with different levels of power. Like a Cayman, the Mission e will also have a cargo hold in the front and the rear, more due to the lack of a combustion engine rather than a mid-ship engine placement. And if the production model holds true to the concept, it will also sport 4-point LED headlights seen in current cars.

The Mission e concept shown bears a slight resemblance to the Porsche Panamera; it also has 4 doors (suicide doors at the rear). This electric car will be powered by an electric motor on either axle, making it a 4-wheel drive (and possibly 2-wheel drive when cruising). The 800-volt batteries are placed in the floor to lower the car’s center of gravity as well as add chassis rigidity. The batteries are said to provide a 400 km range with a charge time of 15 minutes (80% capacity; you don’t have to fully charge modern lithium batteries).

Speaking of which, the Mission E is touted to come with inductive charging, so like a smartphone or smartwatch, you just park it over a charging plate. Perhaps future infrastructure will be such that parking spaces or even certain stretches of road will have coils of wire underneath to allow inductive charging on-the-go. There’s also the conventional wired way of charging the Mission e with the quick charging port.

Other technology highlights include the use of cameras in lieu of mirrors and an interior that’s as user-friendly as a smartphone, with gesture control and eye tracking.

In terms of performance, the first Mission e variant is said to have a quiet 600 hp and 0 – 100 km/h time of 3.5 seconds. It isn’t clear if engine roar and exhaust acoustics will feature as options.