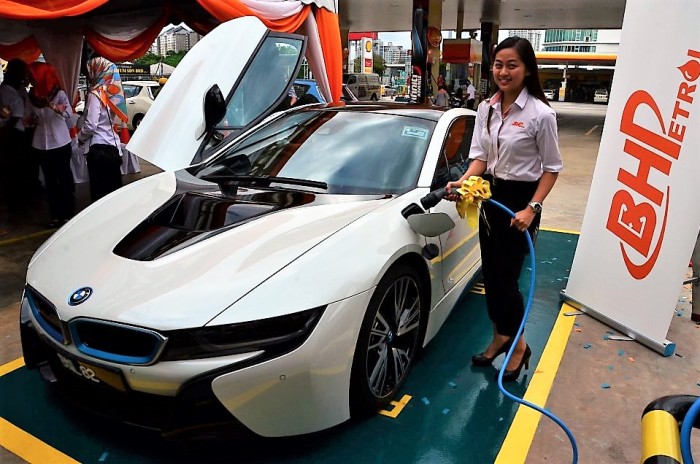 Petaling Jaya, 14 February, 2017 – In what was described as a ‘loose’ collaboration, BHPetrol and First Energy Works Sdn Bhd (FEN), a fully owned subsidiary of Tan Chong Group, have teamed up to undertake an infrastructure exercise to support FEN’s ‘zero emission’ mobility objectives – as a direct result of which is the launch of BHPetrol’s first Electric Vehicle (EV) and Plug-in hybrid (PHEV) charging kiosk at the BHPetrol Kg Sg Kayu Ara station today.

BHPetrol’s Managing Director Mr Tan Kim Thiam announced that until further notice, the recharging service is free of charge. Mr Tan Kim Thiam said that he supports this offer of free recharging as he believes that this would create more exposure and enhance the BHPetrol brand. “We will be providing more BHPetrol service stations with the same service in the future to cater for the demand,” he added.

The charging stations are equipped with model Type 2, 3-phase, 22kW Fast Charger. Charging time takes approximately one hour, and car owners are required to bring their own charging cable. At the moment, there is only one charger in its own dedicated bay, understandably out of the main flow of normal petrol or diesel lanes.

Five cars, namely the Nissan Leaf, Renault Zoe, Renault Twizy, Volvo XC90 and BMW i8 were exhibited during the launch.