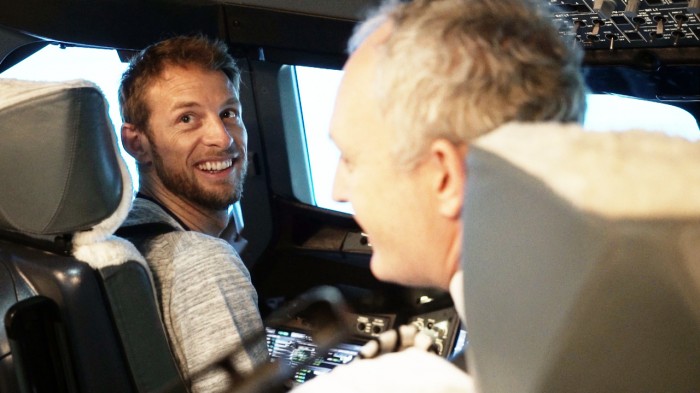 Jenson Button is on a break from motor racing (some say he’s retired but let’s just wait and see), so what does a former Formula 1 driver do with his spare time? Why, ‘fly’ a passenger airliner, of course. Jenson, a former World Champion and driver for McLaren F1, recently sat himself in a British Airways A380 flight simulator at London’s Heathrow Airport.

Not a stranger to simulators, Jenson spent 90 minutes in one at the Flight Training Centre perfecting his take-off, cruising and landing of the world’s largest commercial aircraft. This state-of-the-art simulator, in which British Airways’ 4,200 pilots are trained, uses cutting-edge motion, audio and graphics technology for a completely immersive experience.

Getting Jenson up to speed with the aircraft controls was British Airways’ Head of Technical and Training, Captain Dave Thomas and Senior First Officer, William Swinburn.  Button made 3 landings into Hong Kong International Airport with the double-decked 4-engine aircraft. “It was so cool! I’ve flown all over the world but this is the first time I’ve experienced what it’s like to be at the controls and it was a pretty incredible feeling,” said Jenson.

“It’s like you’re in a real aircraft and after a while you forget it isn’t the real thing. I think I did pretty well for a first timer – though if there had been passengers in the back we might have had a few complaints about my first landing. Let’s just say it was a bit bumpy,” he added.

Captain Dave Thomas, Head of Technical and Training, was impressed by Jenson’s handling of the aircraft. He added: “Jenson obviously has experience traveling at high speeds and he adapted well to taking control of the A380.

“Being a pilot is all about calmness under pressure, preparing properly and getting from A to B with safety being the foremost priority at all times, so I think coming from a Formula 1 background Jenson definitely has some of the attributes required of a pilot.”

It seems unlikely we will be calling Jenson, ‘Captain’ in the near future but who knows?

You can book your tickets at ba.com.