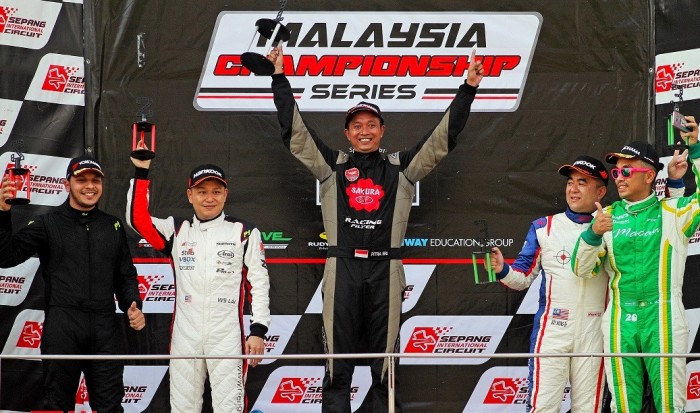 Fitra, who won both sprint races in Round 1 in May, showed his prowess in the endurance test as well, in his Honda FD2 machine despite a strong challenge from second-placed Lai Wee Sing and Abdul Kaathir Mohd Mustaffa of R Engineering, who were driving a similar race car.

The Indonesian stuttered in the beginning, dropping to fourth behind Lai Wee Sing. But by the end of Lap 1, Fitra managed to move up to second. “I decided to just shadow Lai, who was quick, and then I went in for the compulsory pit stop immediately after the pit window opened. I was seventh when I rejoined the race and did five quick qualifying laps to take over the leadership when Lai pitted for a driver change. My car was good and the team did a very good job this weekend,” Fitra said after the race.

With 15 points collected yesterday, Fitra takes his championship points haul to 45, opening a 13-point gap over Lai and Abdul Kaathir, who have 32 points.

A poor start saw Kenny losing his pole position advantage as Darwin raced to the front to lead for the five opening laps. Having the faster machine all weekend, Kenny passed his rival in the sixth lap on Turn 9 and cruised to victory.

“We worked hard preparing this car and working on the tyres. We had the best setting and the car was simply superb all weekend. We hope to maintain and carry this performance to the Sepang 1000 Kilometer race. We are clearly on the right track,” said Kenny, who commended SIC on the appointment of Yokohama as the Official Tyre for the series this season.

Despite finishing second, Darwin continues to lead the MTC Championship with a total haul of 42 points. Kenny Lee now moves to second with 31 points, with Nick Mah filling third spot on the table with 26 points.